St. Euthymius the Bishop of Novgorod 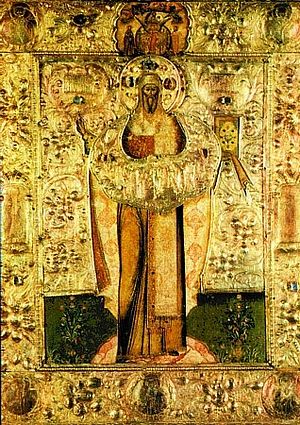 Saint Euthymius, in Baptism John, was born in answer to the fervent prayers of the presbyter Micah and his wife Anna. For many years they had been childless, and they vowed that if they had a son, they would dedicate him to God. The boy read priestly books and frequently attended church services, often helping his father in the small church of Saint Theodore. All this sanctified young John’s soul. In the year 1411, he left his parental home for a monastery at the age of fifteen.

Twelve versts from Novgorod, in a wilderness spot named Vyazhisch, three monks, Euphrosynus, Ignatius and Galacteon, settled in the forests and the swamps. They were soon joined by the priest Pimen, who was tonsured with the name Pachomius. Here they lived in complete solitude at a wooden chapel they built in honor of Saint Nicholas. They lived in unceasing prayer and struggled with the severe conditions of nature in the northern regions.

The young John also came to these ascetics seeking salvation. The igumen Pachomius accepted him fondly and tonsured him into monasticism with the name Euthymius. His tonsure at such a young age is an indication of the young ascetic’s outstanding spiritual traits.

At that time the Archbishops of Novgorod occupied a unique position. Independent of princely authority, they were elected directly by the assembly and they assumed a large role in secular matters. Moreover, they administered vast land-holdings. Under these conditions, an archbishop’s steward had to combine administrative talent with the utmost non-covetousness and deep Christian humility. Saint Euthymius fervently entreated the archpastor to send him back to Vyazhisch, but then he agreed to stay.

Saint Euthymius evoked general astonishment and esteem, occupying such an important position, and being at the center of business life in a large city. As a monk he devoted himself to asceticism as fervently as he would have done in the deep forest.

Archbishop Simeon died in 1421. Under the new hierarch, Euthymius I, Saint Euthymius again withdrew to his monastery. Soon, however, the monks of a monastery on Lisich Hill chose the saint as their igumen. With the death of Archbishop Euthymius I in 1429, Saint Euthymius was then chosen as archbishop. On November 29, he entered into the temple of Saint Sophia. For four years the saint administered the Novgorod diocese, while putting off being installed as archbishop. Only on May 24, 1434 was he consecrated at Smolensk by Metropolitan Gerasimus.

Saint Euthymius wisely governed his diocese for twenty-nine years, zealous in fulfilling his archpastoral duty. Saint Euthymius labored in constructing and restoraing churches, especially after the devastating fires of the years 1431 and 1442.

The Sophia cathedral was richly embellished by the saint, and several new churches were built in the Novgorod Kremlin. “If you wish to see a few of his great works,” writes Pachomius the Logothete, “go to the temple of Saint Sophia. There you will see the churches he built, standing like hillocks. They speak of their varied charm, not with words, but in deed. ‘This was given me by Archbishop Euthymius,’ proclaims one church. Another says, ‘He has adorned me so magnificently.’ A third exclaims, ‘He built me up from the very foundations.’

The church of Saint John Chrysostom, tall and beautiful, blesses with the hand of Chrysostom, and proclaims: “Since you have built me a temple, I in turn shall entreat the Creator to prepare a habitation in Heaven for you.”

The cathedral of the Wisdom of God, speaking across the years of its restoration by him, proclaims: “He has restored me to my original grandeur, he has adorned me with holy icons. He is my praise and beauty.”

Zealous for the glory of God, Saint Euthymius had more spiritual books printed. Many service books survive from this period, transcribed “under the authority of Archbishop Euthymius.” Despite his abundant works, the saint always promptly fulfilled the monastic Rule. Whatever he could not do by day he accomplished by night. An hour before Matins the saint rose up for his cell rule. He often spent the whole night without sleep, and he wore chains, but no one knew about them until his death. The saint spent the first week of Great Lent at Vyazhitsk monastery in silent prayer, eating nothing.

In 1446 the great-princely throne was usurped by Shemyaka, who established relations with Novgorod. The political situation in Novgorod was often quite strained. In 1451, Saint Jonah (March 31) in a special letter urged the people of Novgorod to cease their rowdiness and to heed their archpastor. “Heed our son and brother, your father and teacher, the God-beloved Archbishop Euthymius, in all things.”

Saint Euthymius, advanced in age, was troubled in soul that the actions of Shemyaka might cast a pall over his relations with the revered primate, and he sent a letter to Saint Jonah. Sensing the nearness of his death, Saint Euthymius asked his prayers and pardon.

In his reply, a letter of pardon, Saint Jonah wrote: “We remind you, my son, that you comported yourself too simply: you accepted one who was excommunicated for his transgressions by Our Humility, and found him worthy of your blessing. My son, offer repentance to God for this.”

Saint Jonah ordered that if the letter of pardon should arrive after the blessed end of Novgorod’s archpastor, then it should be read over his grave. Saint Euthymius reposed on March 10, 1458. The priest Eumenius, sent by Saint Jonah with the grammota of pardon, arrived in Novgorod sixteen days after the death of Saint Euthymius, whose grave was at the church of the Vyazhitsk monastery.

When they opened the grave in order to read the letter of pardon, they then saw that the body of the saint showed no sign of decay. Saint Euthymius lay there as though asleep, and his fingers were positioned for a blessing. “God preserve Novgorod, for which Saint Euthymius prays,” exclaimed Eumenius. Reading the letter of Saint Jonah, he placed it into the hand of the deceased hierarch.

Soon after the death of the saint, the Lord glorified him by working miracles for those who sought his prayerful intercession. Greatly revering the saint, the monks of the Vyazhitsk monastery built a church in honor of Saint Euthymius, which was noted in the census of 1500.

O hierarch Euthymius, you were chosen by God from your youth / And honored with the rank of bishop. / You faithfully cared for your flock / And even after your repose / You received the gift of wonderworking, to heal infirmities. / Now pray for us who celebrate your memory / That we might praise Christ ceaselessly!

Equal in rank with the great hierarchs and champion among holy bishops, / O holy Bishop Euthymius, continue to care for your flock. / Pray for those who celebrate your holy memory and venerate your holy relics, / That we may all cry: Rejoice, O holy hierarch wise in God!