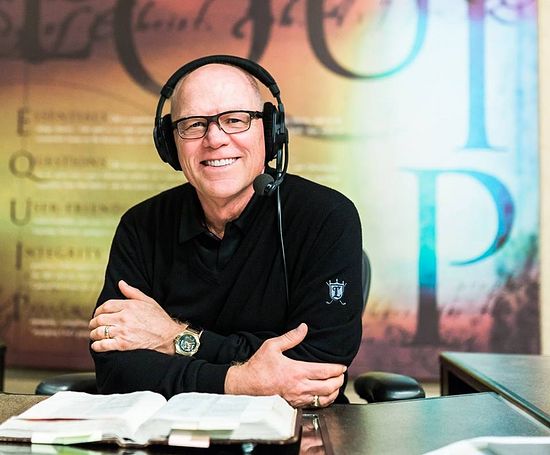 Radio personality Hank Hanegraaff, known around the world as the “Bible Answer Man,” who was received into the Orthodox Church along with his wife Kathy on the feast of Palm Sunday, has announced to supporters of his ministry via a May 6th video on his “Bible Answer Man” Facebook page that he has been diagnosed with a rare form of cancer.

In a previous video on May 3 he announced that he had been diagnosed with anemia, with low blood cell and platelet counts, and that he had been to an oncologist and was awaiting the results of his bone marrow biopsy. Although the last few weeks of his life were turbulent he said, he has never been more peaceful in the entirety of his Christian life. “I just feel surrounded by the love and goodness and grace of God,” he states.

Hank Hanegraaff has served as the president and chairman of the board of the North Carolina-based Christian Research Institute (CRI) since 1989, when he also took over previous-president’s radio talk-show “The Bible Answer Man.” The show includes answering questions about matters of Christian doctrine and history and Biblical interpretation, and denominational particularities. The turbulence he speaks of no doubt comes from the fact that he has been subject to insults and attacks since his conversion became publicly-known, and his radio show has been dropped by certain Protestant networks that do not accept the Orthodox Church as Christian.

Despite these issues, he noted in the video in which he announced that he has mantle cell lymphoma, a rare but treatable cancer that will require aggressive chemotherapy, that he has been “enveloped in peace.” Despite the blow and bitter pill of his diagnosis, he maintains that “all of that becomes very contextualized when you realize that our dear Lord holds every breath and every moment of my life in His hand.”

The video is his way of asking prayer, he states, although not necessarily for healing: “I certainly know that our Lord is fully capable of doing that. But what I want most of all is that He would be glorified through my condition—that in the midst of what I’m going through I might be able to reach out and help others in their struggles.”

“I know the finger of God is at work in my circumstance,” Hank affirms.

He thanked the thousands that had been in contact with him and who are praying for his recovery, but he reiterates that his prayer is, “commensurate with the prayer of Jesus, and John, and Paul, and James, and with the Church throughout the ages: ‘Nevertheless Lord, not my will, but Thy will be done.’”

He also read on air the morning prayer of St. Philaret of Moscow, which he described as a “poignant reflection of my innermost thoughts and feelings, and the passion of my heart:”

O Lord, I do not know what to ask of Thee. Thou alone knowest what I need. Thou lovest me more than I know how to love myself. O Father, grant Thy servant what I myself do not know how to ask. I do not dare to ask a cross of Thee, nor consolation; I only stand before Thee with my heart open; Thou seest the needs that I myself do not know. Look, and work in me according to Thy mercy; smite and heal me, cast me down and raise me up! I am reverent and silent before Thy holy will and ways that are unfathomable to me. I offer myself as a sacrifice to Thee; teach me to pray. Do Thou Thyself pray in me. Amen. 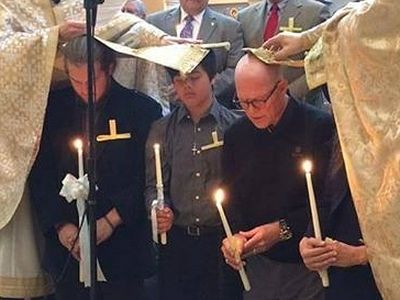 David Sanders16 мая 2017, 15:46
Hank's conversion has caused great turbulence in the Protestant-Evangelical community as it did when the Evangelicals led by the late Fr. Peter Gilquist and Fr. Jon Braun joined the Orthodox Church back in 1987. Brother Hank's conversion however really "rocked the boat" because he did it while being the major spokesman for Evangelicals. His testimony to the power of God working in His Holy Church continually for two millenia will live on forever. May God send down his healing powers to our brother in Christ John (Hank's chrismated name) and may God grant him many years!

Edward Hara15 мая 2017, 17:46
Actually, while the comment about intelligence was off based and should be reconsidered (it lacks charity, for one thing), I agree that a time of being away from public broadcasting such as podcasts, as well as writing in a definitive manner, should be enacted. As a convert from Protestantism myself, I know that all of us converts bring in a certain amount of baggage from our old life and ways of thinking. These things can be, depending upon the person, ingrained rather deeply, and therefore we need time to develop an Orthodox pheroma. A good spiritual father will be an immense help to our brother, Hank, as he enters into this new stage of his journey into theosis and the life of Christ/God.

James13 мая 2017, 23:37
@Thomas: are you saying what I think you are: "I don't think he is very intelligent?" Seriously, Thomas, you need to reconsider your judgment of a brother in Christ. Hank, we are praying for you. Lord, have mercy.

Sue11 мая 2017, 14:47
Thomas: "Joined the faith before he dies." We don't know that he'll die of this cancer. The article says that it's curable. Better to pray for his speedy healing!

Anthony11 мая 2017, 14:29
@(doubting)Thomas. Greetings of the day! Rejoice my beloved! And many many thanks for taking the time out to offer your opinions and suggestions as to how others should and shouldn't live their lives. I don't however think it is up to you to comment on what others do with their lives especially if they are doing it with love for God and neighbour in their hearts. And I say once again with all your heart raise your hands up high and rejoice!

Thomas11 мая 2017, 13:03
God have mercy on Hank. I didn't know anything about this person before the news of his conversion came out, but I am glad he joined the one true faith before he dies. I don't think he is very intelligent though, and he shouldn't be hosting a podcast as the Bible Answer Man when he doesn't know Greek or even any other languages. After converting, he should have stopped his podcast, or at least taken a year-long break.