Commemoration of the Founding of Constantinople 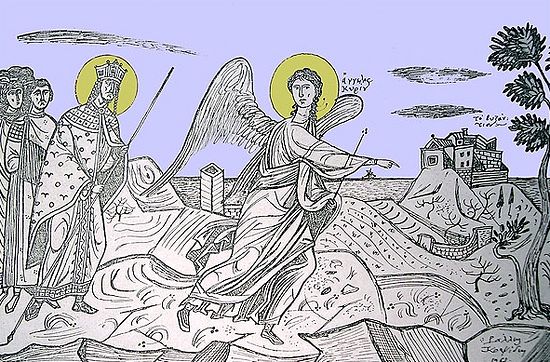 In 324 the holy Emperor Constantine (May 21) decided that the imperial capital had to be closer to the Eastern provinces, and yet have direct communication with the West. The city of Byzantium fulfilled these requirements, and on November 8, 324 the site of the new capital was consecrated.

Tradition tells us that the Emperor was tracing the boundaries of the city with a spear, when his courtiers became astonished by the magnitude of the new dimensions of the capital. “Lord,” they asked, “how long will you keep going?”

Constantine replied, “I shall keep going until the one who walks ahead of me stops.”

Then they understood that the emperor was being guided by some divine power. There is an iconographic sketch by Rallis Kopsides showing an angel of the Lord going before Saint Constantine as he traces the new boundaries of the city.

Construction of the main buildings was begun in 325, and pagan monuments from Rome, Athens, and other cities were used to beautify the new capital. The need for the new city is partially explained by the changing requirements of government, the Germanic invasion of the West, and commercial benefits, but the new city was also to be a Christian capital. For this, a new foundation was required.

In 330, the work had progressed to the point where it was possible for Constantine to dedicate the new capital. The dedication took place on May 11, followed by forty days of joyous celebration. Christian Constantinople was placed under the protection of the Most Holy Theotokos, and overshadowed pagan Byzantium. Saint Constantine was the first Emperor to submit voluntarily to Christ, and Constantinople became the symbol of a Christian Empire which lasted for a thousand years.

The city of the Theotokos / dedicates its foundation as an offering to the Theotokos. / For it has been established to remain in Her, / and it lives and is strengthened through Her, / crying out to Her, / “Hail, the hope of all the ends of the earth.”