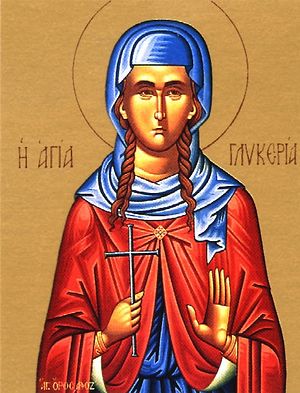 Saint Glyceria suffered as a martyr for her faith in Christ in the second century, during a persecution against Christians under the emperor Antoninus (138-161). She came from an illustrious family, and her father Macarius was a high-ranking Roman official. Later, the family moved to the Thracian city of Trajanopolis.

Saint Glyceria lost both her father and mother at an early age. Falling in with Christians, she converted to the true Faith, and she visited the church every day. Sabinus, the prefect of Trajanopolis, received the imperial edict ordering Christians to offer sacrifice to the idols, and so he designated a certain day for the inhabitants of the city to worship the idol Zeus.

Saint Glyceria firmly resolved to suffer for Christ. She told the Christians of her intention, and she begged them to pray that the Lord would give her the strength to undergo the sufferings. On the appointed day Saint Glyceria made the Sign of the Cross on her forehead, and went into the pagan temple.

The saint stood on a raised spot in the rays of the sun, and removed the veil from her head, showing the holy Cross traced on her forehead. She prayed fervently to God to bring the pagans to their senses and destroy the stone idol of Zeus. Suddenly thunder was heard, and the statue of Zeus crashed to the floor and smashed into little pieces.

In a rage, the prefect Sabinus and the pagan priests commanded the people to pelt Saint Glyceria with stones, but the stones did not touch the saint. They locked Saint Glyceria in prison, where the Christian priest Philokrates came to her and encouraged the martyr in the struggle before her.

In the morning, when the tortures had started, suddenly an angel appeared in the midst of the torturers, and they fell to the ground, overcome with terror. When the vision vanished, Sabinus, who was hardly able to speak, ordered them to throw the saint into prison.

They shut the door securely and sealed it with the prefect’s own ring, so that no one could get in to her. While she was in prison, angels of God brought Saint Glyceria food and drink. Many days afterwards, Sabinus came to the prison and he himself removed the seal. Going in to the saint, he was shaken when he saw her alive and well.

Setting off for the city of Heraclea in Thrace, Sabinus gave orders to bring Saint Glyceria there also. The Christians of Heraclea came out to meet her with Bishop Dometius at their head, and he prayed that the Lord would strengthen the saint to endure martyrdom.

At Heraclea they cast Saint Glyceria into a red-hot furnace, but the fire was extinguished at once. Then the prefect, in a mindless fury, gave orders to rip the skin from Saint Glyceria’s head. Then they threw the martyr into prison onto sharp stones. She prayed incessantly, and at midnight an angel appeared in the prison and healed her of her wounds.

When the jailer Laodicius came for the saint in the morning, he did not recognize her. Thinking that the martyr had been taken away, he feared he would be punished for letting her escape. He wanted to kill himself, but Saint Glyceria stopped him. Shaken by the miracle, Laodicius believed in the true God, and he entreated the saint to pray that he might suffer and die for Christ with her.

“Follow Christ and you will be saved,” the holy martyr replied. Laodicius placed upon himself the chains with which the saint was bound, and at the trial he told the prefect and everyone present about the miraculous healing of Saint Glyceria by an angel, then he confessed himself a Christian.

The newly chosen one of God was beheaded by the sword. Christians secretly took up his remains, and reverently buried them. Saint Glyceria was sentenced to be eaten by wild beasts. She went to execution with great joy, but the lioness set loose upon the saint meekly crawled up to her and lay at her feet.

Finally, the saint prayed to the Lord, imploring that He take her unto Himself. In answer she heard a Voice from Heaven, summoning her to heavenly bliss. At that moment, another lioness was set loose upon the saint. It pounced upon the martyr and killed her, but did not tear her apart. Bishop Dometius and the Christians of Heraclea reverently buried the holy martyr Glyceria. She suffered for Christ around the year 177. Her holy relics were glorified with a flow of healing myrrh.

Saint Glyceria, whose name means “sweetness,” now rejoices in the unending sweetness of the heavenly Kingdom.

Your lamb Glyceria, calls out to You, O Jesus, in a loud voice: / “I love You, my Bridegroom, and in seeking You I endure suffering. / In baptism I was crucified so that I might reign in You, / and I died so that I might live with You. / Accept me as a pure sacrifice, / for I have offered myself in love.” / Through her prayers save our souls, since You are merciful.

Through your love for Mary, the Virgin Theotokos, / you preserved your virginity, O Glyceria. / You surrendered your heart to the Lord / and bravely fought until your death. / Therefore, Christ God has granted you a double crown.