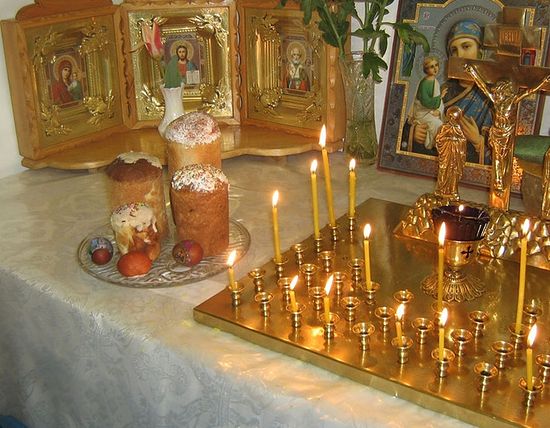 Once an ascetic of the Kiev Caves Lavra went on Pascha day to the famous caves where hundreds of monks are buried, and, from his abundance of Paschal joy, exclaimed, “Christ is risen!” “In truth He is risen!” came a brotherly, jubilant response. It was a greeting from another world, from the reposed monks abiding in the coffins of the caves; citizens of the Heavenly Kingdom.

Today, in obedience to the Holy Church, we also observe the Paschal day of the commemoration of the dead which we call “Radonitsa,” calling out to the them, CHRIST IS RISEN! And we hear their response.

One of these responses was the life and death of one ascetic of the Pskov Caves Monastery—Archimandrite Antipas.

Fr. Antipas came to the monastery after the war. He was amongst the small number of officers and soldiers whom the Lord helped survive the war and called to monastic service. Another such person was the Superior of the monastery, Archimandrite Alipy. Father Antipas became the spiritual son of Schema-abbot Savva. He struggled many years in the monastery, was exceedingly kind, always friendly to everyone. No one ever saw him angry, even though multitudes of people came to him everyday for confession and counsel. At night Fr. Antipas performed his most cherished labor—prayer (he loved most of all to read the Psalter and akathists), the endless commemoration of the living and the dead. He used to tell us young novices how important the Church commemorations are. “The main thing is to die and have the Church commemorate you! The prayers for the living and the dead at the Liturgy and the kathismas of the perpetual Psalter readings have an unseen power that conquers the demons, softens hearts, and begs the Lord’s mercy so greatly that He brings sinners out of hell.”

Fr. Antipas was in charge of the “Unsleeping Psalter.” If it would happen that someone could not read the Psalter during his assigned hour due to illness or work (the reading never ceased even for an hour), then Fr. Antipas would come and read it himself, along with the commemoration books. He himself had four hours of Psalter reading every night, it seems.

He also prayed with his whole heart for people when he read the akathists. People would sometimes order special akathist services containing as many as twelve to fifteen akathists. Many monks did not like these long services very much—long akathists, and then endless lists of names… But Fr. Antipas would shine during these long, hard services; he so rejoiced, and felt how important the Church’s prayers are for the living and the dead.

Well, the time came when Fr. Antipas was no longer able to climb the long stairway leading to St. Michael’s cathedral on the hill. Batiushka celebrated his final service tearfully. The parishioners also wept, because they loved Fr. Antipas very much, and were grieved that this great man of prayer would no longer be present at the akathist services. Fr. Antipas also grieved because he would be deprived of the possibility to read his beloved akathists. This was during the mid 1980’s, when akathist books were not being published; people read from hand-written notebooks in those days. The suitcase full of akathists that Fr. Antipas had always governed was now being delegated to other clergymen.

At the end of this sorrowful service, a group of foreign tourists came into the church. They stood for a short time, but before departing, one woman pulled a little book out of her purse, showed it from a distance to Fr. Antipas, and placed it on the solea. When Fr. Antipas left the church accompanied by the weeping parishioners, he took the book… It was a book of akathists published in Brussels. For his great love for his fellow man, for his many labors of prayer for the living and the dead, the Lord consoled Fr. Antipas. We recall how Fr. Antipas would sit with this book on the bench outside his cell on the holy hill, and, donning his large eye-glasses, pray with great concentration and fervency as if it were the first time, and then read his thick, weathered commemoration book after each akathist or kathisma.

Before he died, Fr. Antipas took to his bed. He was given confession and Holy Communion. But as they recall, he found the inner strength to rise and go to the caves, to the grave of his spiritual father, Fr. Savva. He took his cross and Gospels with him, confessed to his reposed spiritual father, asked for his prayers before the great journey ahead, and then returned to the infirmary to die.

When I came to Pechory from Moscow for his funeral, I was surprised not to find his coffin in the chapel where the blessing of the water was served, for that is where they usually read the Gospels and Psalter over newly reposed monks. The chapel was being repaired, and the Superior blessed the coffin containing Fr. Antipas’ body to be placed in the caves. It was placed right next to the grave of Schema-abbot Savva, whom even death could not separate from Fr. Antipas for all these many years. Now both their relics and their spirits were together. I say “relics” not because someone can be called a saint before he is canonized by the Church, but simply because the body of any Orthodox Christian is called relics in the church.

Thus, the life and death of this remarkable struggler impart God’s blessing to us for the fervent commemoration of the reposed. This is needful not only to the reposed, but also to our own souls for healing and upliftment. His life and death are also an answer to our exclamation today, “CHRIST IS RISEN!” directed at the reposed. In truth Christ is risen, Who “by His ineffable wisdom and love for mankind orders all things and grants to all what is beneficial,” and confirms us in our faith in the future age—the true goal of our earthly life. Amen.

Olga Papadopoulou 6 июня 2012, 03:00
Best Regards from Thessaloniki - Makedonia - Greece I can't forget your face and I would like to see you again. I felt peace when I saw you in the presentation of your book, in Thessaloniki. The "lesson of Byzantine" in your film is very delicate and it is a lesson of true for us Greeks! Thank you for this lesson archimandrite Tikhon!