The Life of St. Xenia of Petersburg 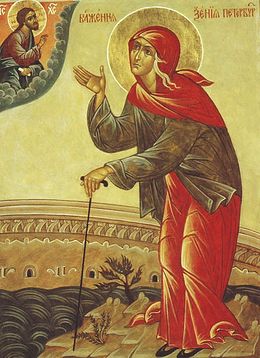 Holy Blessed Xenia of Petersburg.
St. Xenia was the wife of Colonel Andrei Feodorovich Petrov, who served as a court chanter. At the age of 26, Xenia was widowed and, appeared to have lost her mind from grief: she distributed her possessions to the poor, dressed herself in the clothes of her reposed husband, and, as if having forgotten her own name, called herself by the name of her reposed husband - Andrei Feodorovich.

These eccentricities were not indicative of a loss of reason, however, but signified a complete disdain for earthly goods and human opinion, which places them at the center of existence. Thus, Xenia of Petersburg took upon herself the difficult podvig of foolishness for Christ's sake.

Having come to know the inconstancy of earthly happiness through the death of her beloved husband, Xenia strove toward God with all her heart, and sought protection and comfort only in Him. Earthly, transitory goods ceased to have any value for her. Xenia had a house; but gave it over to an acquaintance under the condition that it be used to shelter paupers. But Xenia herself, not having a refuge, would wander among the paupers of Petersburg. At night she would go out to a field, where she spent the time in ardent prayer.

When they began to build a church in the Smolensk Cemetery, Xenia, after the onset of darkness, would secretly carry bricks to the top of the construction, and thereby helped the masons erect the walls of the church.

Some of Xenia's relatives wanted to take her in and provide her with all necessities, but the blessed one replied to them: "I do not need anything."

She was glad of her poverty, and when visiting somewhere, would at times remark: "I am all here!" When her reposed husband's clothing wore out, Xenia clothed herself in the poorest clothing, and wore torn shoes without stockings on her feet. She did not dress warmly and forced her body to suffer from the severe cold.

Sensing the greatness of Blessed Xenia's soul, the inhabitants of Petersburg loved her, because she despised the earthly for the sake of the Kingdom of Heaven. If Xenia entered anyone's home, this was considered a good sign. Mothers rejoiced if she kissed their children. Cab drivers would ask permission of the blessed one to drive her a little, since after this the earnings would be guaranteed for the whole day. Merchants in the bazaars would try to give here kalach [cracknel bread] or some food; if Blessed Xenia took something from what was offered, all the wares of the seller were quickly bought up.

Xenia had the gift of clairvoyance. On the eve of the Nativity of Christ in 1762, she walked about Petersburg and said, "Bake blini! Tomorrow all Russia will bake blini!" The next day, the Empress Elizabeth Petrovna, suddenly died [blini is traditionally made at someone's death]. A few days before the murder of the royal youth, John VI (Antonovich, the great­great­grandson of Tsar Alexis Michailovich), who in infancy had been proclaimed the Russian Emperor, the blessed one wept and repeated, "Blood, blood, blood." Within a few days after Mirovich's unsuccessful conspiracy, the young John was killed.

Once, Xenia came to a home where there was a grown-up daughter. Turning to the girl, she said, "Here you are drinking coffee, while your husband is burying his wife at Okhta." After a certain time, this girl married that very widower who at that moment had been burying his first wife at the Okhta Cemetery.

Blessed Xenia died at the end of the eighteenth century, but tradition has not preserved either the year or day of her decease. She was buried in the Smolensk Cemetery, where she had helped build the church.

Pilgrimages to her grave began shortly after her decease. Blessed Xenia often appeared in visions to people in difficult circumstances, forewarned of dangers and saved them from calamities. The righteous one has not ceased to show compassionate love toward all who with faith have called upon her, and many instances of her help for the suffering and those in desperate situations are known.

A civil servant, Nicholas Selivanovich Golovin, had lived in Grodno approximately until 1907. He often experienced unpleasantness at work. He came to Petersburg to put his affairs in order, but they became even more entangled. Golovin was very poor, caring for his elderly mother and two sisters. In despair, he walked along the streets of Petersburg, and, though he was a man of faith, the thought to throw himself into the Neva stole into his soul. At this moment, some unknown woman stood in front of him. He was struck by her appearance, which was reminiscent of a poor nun. "Why are you so sad?" she asked. "Go to the Smolensk Cemetery, serve a panikhida [a requiem service] for Xenia, and everything will be settled." After these words, the unknown woman disappeared. Golovin fulfilled the advice of the mysterious nun, and his affairs were unexpectedly settled in the best manner possible. He joyfully returned home to Grodno.

Emperor Alexander III, when he was the heir, became ill with a serious form of typhus. The Grand Duchess Maria Feodorovna was very alarmed by her spouse's illness. One of the valets, seeing her in the corridor, related to her how Blessed Xenia helps the sick, gave her sand from the cherished grave and added that he himself had been healed from illness by the prayer of the righteous one. The Grand Duchess placed the sand under the pillow of the patient. That same night, while sitting at the head of the bed, she had a vision of Blessed Xenia, who told her that the patient would recover and that a daughter would be born in their family. She should be called Xenia. The prediction of the blessed one was fulfilled exactly.

In the Pskov province, a relative from Petersburg came to stay for a while with a landowner and recounted how they revere Blessed Xenia in the capital. Under the influence of this account, the pious landowner prayed before sleep for the repose of her soul. At night, she dreamed that Xenia was walking round her house and pouring water on it. In the morning, the hay barn on the country estate caught on fire, but the fire did not spread further and the home remained whole.

A colonel's widow arrived in Petersburg to enroll her two sons into the Cadet Corps. She did not succeed in this. The money borrowed for the trip had come to an end, and the widow walked along the street and wept bitterly. Suddenly, some woman of the common people came up to her and said: "Serve a panikhida for Xenia. She helps in sorrows." "Who is this Xenia?" asked the colonel's widow. "The tongue [that asks the way] will lead to Kiev," she answered, quickly vanishing.

Indeed, the colonel's widow easily learned who this Xenia was. She served a panikhida for her at her grave in the Smolensk Cemetery, and shortly after received the unexpected news that both her sons had been accepted into the Cadet Corps.

A multitude of similar instances of Blessed Xenia's help is known also in our days.

Having renounced the vanity of the earthly world, / Thou didst take up the cross of a homeless life of wandering; / Thou didst not fear grief, privation, nor the mockery of men, / And didst know the love of Christ. / Now taking sweet delight of this love in heaven, / O Xenia, the blessed and divinely wise, // Pray for the salvation of our souls.

Jess Damewood27 марта 2017, 10:02
God bless St Ksenija! What a fantastic and beautiful story. Ksenija, please pray God for me and my family that I find the job that I am looking for. I'm truly thankful.

Kostantinos17 марта 2017, 13:31
Please st Xenia give me a good job and a good wife to married.God bless all the world and St Xenia.

Editor 1 февраля 2016, 09:36
Anatoly, please do send your story to: editor@pravoslavie.ru and say that this is for the English edition. Looking forward to reading it.

Anatoli29 января 2016, 06:14
I would like to report a very recent miracle that is attributed to St Xenia. Could anyone please suggest the best way of doing that? Kindest Regards. Anatoli.

Madalina15 мая 2015, 00:24
I would like to know how I can have my name mentioned at her grave. I'd like to serve a Panakhida, but since I don't live in Russia, it is difficult to get in touch with a priest from Smolensk. Do you know any bank account of the priest from her grave or some contact info ? Thank you. God bless you

John Galarneau23 декабря 2014, 20:16
Thank you for your account of the Life of St. Xenia! Do you know of a way I can request a Panakhida be served at her grave for myself and my family? I have been out of work for a long time and it's creating great difficulty for our family. We are baptized Orthodox Christians, and are desperate for Her intercessions with Our Lord and Savior Jesus Christ!

Hayley21 декабря 2014, 23:31
I'm praying to St Xenia for my husbands employment and marriage restoration and mental stability. In the name of Jesus Xenia help me.