Be It According to Thy Word 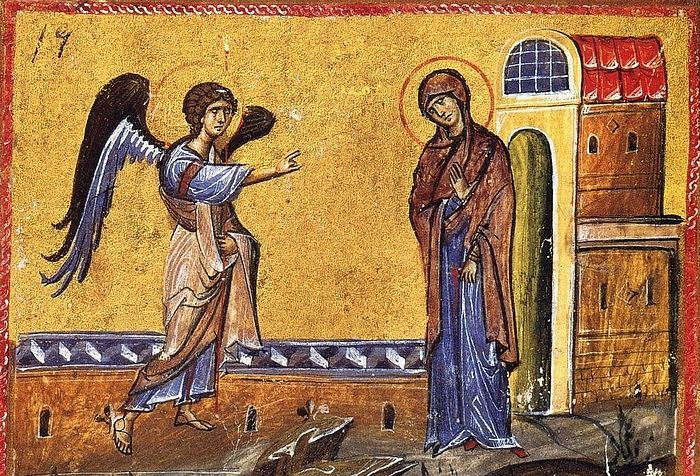 The Annunciation of the Virgin.
Again, the Annunciation is "the beginning of our salvation and the revelation of the mystery which is from eternity: the Son of God becometh the Son of the Virgin, and Gabriel proclaimeth good tidings of grace" (Troparion of the Feast of the Annunciation). The divine will has been declared and proclaimed by the archangel. But the Virgin was not silent. She responded to the divine call, responded in humility and faith. "Behold the handmaid of the Lord; be it unto me according to thy word." Divine will is accepted and responded to. And this human response is highly relevant at this point. The obedience of Mary counterbalances the disobedience of Eve. In this sense the Virgin Mary is the Second Eve, as her Son is the Second Adam.

This parallel was drawn quite early. The earliest witness is St. Justin (Dial., 100), and in St. Irenaeus we find already an elaborate conception, organically connected with his basic idea of the recapitulation. "As Eve by the speech of an [fallen] angel was seduced, so as to flee God, transgressing His word, so also Mary received the good tidings by means of the angel's speech, so as to bear God within her, being obedient to His word. And, though the one has disobeyed God, yet the other was drawn to obey God; that of the virgin Eve the Virgin Mary might become the advocate. And, as by a virgin the human race had been bound to death, by a virgin it is saved, the balance being preserved, a virgin's disobedience by a virgin's obedience" (5, 19, 1). And again: "And so the knot of Eve's disobedience received its unloosing through the obedience of Mary; for what Eve, a virgin, bound by incredulity, that Mary, a virgin, unloosed by faith" (3, 22, 34 — translation by Cardinal Newman). This conception was traditional, especially in the catechetical teaching, both in the East and in the West. "It is a great sacrament [magnum sacramentum] that, whereas through woman death became our portion, so life was born to us by woman," says St. Augustine (De Agone Christ., 24, in another place he is simply quoting Irenaeus). "Death by Eve, life by Mary," declares St. Jerome (Epist. 22: mors per Evam, vita per Mariam).

Let me quote also an admirable and concise passage from one of the sermons of the Metropolitan Philaret of Moscow (1782-1867). He was preaching on the day of the Annunciation. "During the days of the creation of the world, when God uttered his living and mighty words: "Let there be," the Creator's words brought creatures into existence. But on the day, unique in the existence of the world, when Holy Mary uttered her humble and obedient Let it be, I would hardly dare to express what took place then — the word of the creature caused the Creator to descend into the world. God uttered his word here also: You "will conceive in your womb and bear a son . . . he will be great . . . and he will reign over the house of Jacob for ever." But again that which is divine and incomprehensible occurs--the Word of God itself defers its action, allowing itself to be delayed by the word of Mary: How can this be? Her humble Let it be was necessary for the realization of God's mighty Let it be. What secret power is thus contained in these simple words: "Behold, I am the handmaid of the Lord; let it be to me according to your will" — that it produces an effect so extraordinary? This marvelous power is Mary's pure and perfect self-dedication to God, a dedication of her will, of her thought, of her soul, of her entire being, of all her faculties, of all her actions, of all her hopes and expectations." [Choix de Sermons et Discours de S. Em. Mgr. Philarete, Metropolite de Moscow, traduits par A. Serpinet (Paris, 1866, T. 1, p. 187); the translation is by Dr. R. Haugh].

The Incarnation was indeed a sovereign act of God, but it was a revelation not only of His omnipotent might, but above all ofHis fatherly love and compassion. There was implied an appeal to human freedom once more, as an appeal to freedom was implied in the act of creation itself, namely in the creation of rational beings. The initiative was of course divine. Yet, as the means of salvation chosen by God was to be an assumption of true human nature by a divine Person, man had to have his active share in the mystery. Mary was voicing this obedient response of man to the redeeming decree of the love divine, and so she was representative of the whole race. She exemplified in her person, as it were, the whole of humanity. This obedient and joyful acceptance of the redeeming purpose of God, so beautifully expressed in the Magnificat, was an act of freedom. Indeed, it was freedom of obedience, not of initiative — and yet a true freedom, freedom of love and adoration, of humility and trust — and freedom of co-operation (cf. St. Irenaeus, Adv. Haeres., 3, 21, 8: "Mary cooperating with the economy") — this is just what human freedom means. The grace of God can never be simply superadded, mechanically as it were. It has to be received in a free obedience and submission.

From The Ever-Virgin Mother of God by Archpriest George Florovsky. 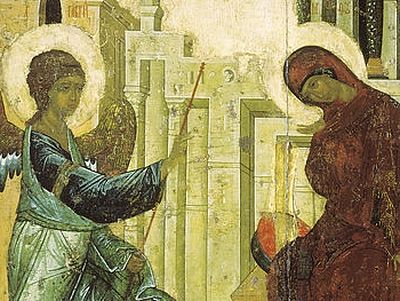 Annunciation
A special feature of this feast is the Matinal Canon which has the character of a dialogue between the Archangel Gabriel and the Virgin Mary. Also among the more popular elements of the feast is the Magnification which has the form of our own salutation to the virgin mother with the words of the archangel:
Комментарии