The Fifteenth Instruction. On the holy forty days of Lent 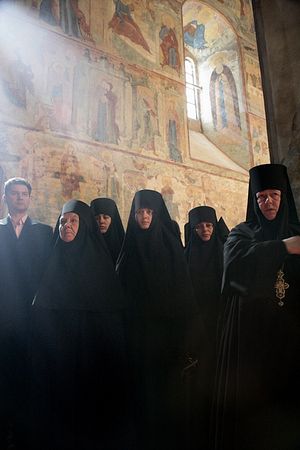 Photo: Archbishop Maximilian (Lazarenko)
In the Law it is written that God commanded the sons of Israel to give a tenth part of all they had acquired during each year, and thereby bring a blessing upon all their deeds. With this in mind, the Holy Apostles established and committed to us as a help and benefaction for our souls something yet greater and more exalted--that we should set apart a tenth portion of the very days of our lives and devote them to God. Thereby might we also receive a blessing for all our deeds, and yearly cleanse the sins we have committed over the course of the whole year. Thus discerning, they have sanctified for us out of the 365 days of the year these seven weeks of Holy Great Lent. So they set apart these seven weeks; but later the Fathers deemed it wise to add yet another week: first of all, so that those wishing to initiate themselves in the ascesis of the fast over the course of this week might accustom themselves to it and prepare themselves for it; and secondly, in order to render honor to the number of days of the Great Fast which our Lord Jesus Christ fasted. For after subtracting Saturdays and Sundays from the eight weeks we have forty days; the fast on Great Saturday is particularly honored, because it is most sacred, and the only Saturdays throughout the year on which a fast it kept. Seven weeks minus Saturdays and Sundays make thirty-five days, then to this is added the fast of Holy and Great Saturday and half of the Bright and Light-bearing night; thus we have thirty-six and a half days, which equals exactly a tenth part of the 365 days of the year. For the tenth part of three hundred is thirty, the tenth part of sixty is six, and a tenth part of five is one-half (of the Bright Day). So, as we have said, there are thirty-six and a half days--the tenth portion of the whole year which, as I have said, the Holy Apostles have sanctified for us for repentance and the cleansing of the sins of the whole year.

So blessed, O brethren, is he who preserves himself well in these holy days as he should. For though it might happen that being human we sin out of infirmity or negligence, still God has given these holy days in order that, striving with heedfulness and humility of wisdom, we take care for ourselves and repent for all of our sins, and we will be cleansed of the sins we committed during the whole year. Then our souls will be delivered from their weight, and we will arrive at the Holy Day of the Resurrection cleansed, receive Communion of the Holy Mysteries uncondemned, having become new through the repentance of the Holy Fast. In spiritual rejoicing, with God's help, we will celebrate the entire Holy Pentecost season--for the Pentecost season, as the Holy Fathers say, is the repose and resurrection of the soul. This is signified by our not kneeling during whole Holy Pentecost season.

Thus he who desires during these days of Lent to be cleansed of the sins he has committed over the course of the whole year should first of all refrain from eating much food, for the lack of limitation in food, as the Fathers say, gives birth to every evil in man. Then he should also take care not to violate the fast without great need, not to seek tasty foods, nor weigh himself down with excess food or drink. For there are two kinds of gluttony. The first kind is when a man seeks pleasant foods, and does not always wish to eat much, but desires something tasty. It happens that when this type tastes a dish he likes, he is so won over by its pleasant taste that he holds the food in his mouth, chews it for a long time, and regretting to part with its pleasant taste, he delays swallowing it. This is called in Greek "lemargia,"--the demon of the throat. The other type is assailed by the desire to eat a large quantity--he does not desire good food and is not concerned about its taste, but only wants to eat, whether the dishes are tasty or not, and he makes no distinction. His is only concerned with filling his belly. This is called "gastrimargia," that is, the demon of the belly.

I will tell you also about the etymology of these words. The word "margenin," demonic possession, is the word used by Hellenic scholars to describe those who are possessed by demons, and the possessed person is called margos. So when anyone has this infirmity, that is, a demonic compulsion to fill the belly, then their infirmity is called gastrimargia, from the words indicating demonically-possessed, and belly--that is, to be demonically possessed with regard to the belly. And when the demonic possession regards only the throat it is called lemargia, form the words meaning throat, and demonic possession. Therefore he who wishes to be cleansed of his sins must take great care to flee these kinds of gluttony; they satisfy not the needs of the body, but passion; and if one surrenders himself to them it will be accounted unto him as sin. The act in lawful marriage and fornication is one and the same, but the aim constitutes the difference of the matter; for one acts to conceive children, while the other acts to satisfy his love of pleasure. It is the same in relation to food: to eat out of need and to eat in order to delight one's taste is one and the same act, but the sin is to be found in the intention. Someone eats according to need when he determines for himself how much food to take in a day; and if he sees that this quantity of food he has determined weighs him down and should be a little decreased, he therefore decreases it. If it does not weigh him down, but is rather insufficient for the body and his body requires a little more, he adds a little more. Thus having tested well his need, he holds thereafter to a determined measure and eats food not in order to delight his taste but rather to maintain his body's strength.

However, even the little food that someone eats should be received with prayer, and he should condemn himself mentally as unworthy of any food or consolation. He should likewise pay no attention to others who out of some current requirement or need receive some comfort in this regard, so that he might not desire comfort for himself, and in general he should not think that the repose of the body is an easy thing for the soul.

Once, when I was still in the community, I went to visit one of the elders--for there were many great elders there--and I found that the brother who was serving him took food together with him. Seeing this I told him separately, "Do you not know brother, that these elders who, as you see, eat and make certain condescensions for themselves according to their needs, are like people who have acquired storehouses; and after working for a long time, they have stored therein what they have earned until they have filled them. Once they have filled and sealed the storehouses, they begin again to work now for their own expenses, and they collect another thousand gold-pieces so that they will have something to use in time of need, preserving what they have set aside in the storehouses. So also these elders, after working a long time, have gathered in their youth treasure for themselves, and having sealed it up, they have worked a little longer, to have something in the time of their old age and infirmity to take from, and preserve what they have gathered as a treasure trove. But we have not even acquired the storehouse itself. What shall we have to spend?" Wherefore we should, as I have said, when taking food out of bodily necessity, condemn ourselves and consider ourselves unworthy of any consolation and even of the monastic life itself, and we should not take food without restrain, so that it will not be to our condemnation.

We have said this concerning restraint of the belly. However we must not limit our temperance to food, but refrain also from every other sin. Just as we fast with our stomachs, we should fast also from every other sin; just as we fast with the belly, we should fast also with the tongue, restraining it from slander, from lying, idle-talking, from belittlement, from anger, and in a word, from every sin that is performed by the tongue. We must likewise fast with the eyes, that is, not look at vain things, not give freedom to our eyes, not look at anyone shamelessly and without fear. The hands and feet should also be constrained from every evil deed. Having fasted, as St. Basil the Great says, by a favorable fast, removing ourselves from all the sins of all of our senses, we shall attain to the holy day of the Resurrection, having become as we have said, new, pure and worthy of Communion of the Holy Mysteries. But first let us go out and meet our Lord Jesus Christ Who comes to suffer, and with olive and palm branches let us receive Him sitting upon the foal of a donkey, entering the Holy City of Jerusalem.

Why did the Lord sit upon a foal? He sat upon a foal so that He as the Word of God might subdue and convert our souls--which as the Prophet says are like irrational and unthinking animals--to His Divinity. What does it signify that He is met with palm and olive branches? When someone goes to battle with his enemy and returns victorious, all his subjects greet him as victor with palm branches, for palm branches are a symbol of victory. Likewise when a man suffers offense from another and wishes to appeal to a someone who can defend him, he brings him olive branches, crying out and entreating for mercy and aid, for olive branches are a symbol of mercy. Therefore we meet our Master Christ with palm branches for He is Victor, for He has conquered our enemy; and with olive branches asking of Him mercy, entreating that just as He has conquered for us, so we might conquer through Him--that we might be bearers of the sign of victory not only for the sake of the victory He has won for us, but also for the victory we have won through Him, by the prayers of all the saints. For to Him is due every glory, honor and worship unto the ages. Amen.