We offer for our readers’ attention a portion of one of the most acclaimed patristic works dedicated to the significance of our Lord Jesus Christ’s Sacrifice on the Cross. This homily was given by Archimandrite Philaret (Drozdov), the future Metropolitan Philaret of Moscow, in the St. Alexander Nevsky Lavra on Holy Friday, 1816. 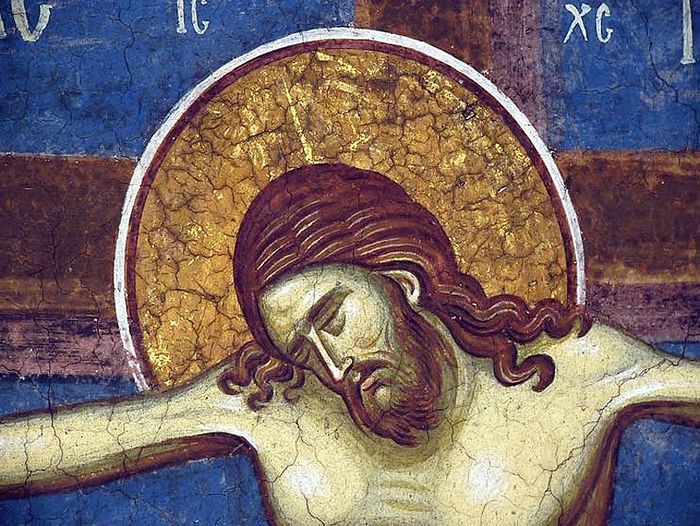 Shall some speak these days of love? Shall they now speak, when the fruit of enmity has ripened in the vineyard of the Beloved; when the earth trembles at the horror, hearts of stone are rent asunder, and the eye of heaven is darkened with deep indignation? Shall they now speak of love for the world, when also the Son of God, suffering in the world, is abandoned bereft of comfort, and His prayerful cry, My God, my God, why hast Thou forsaken me? (Mt. 27:46), is left without response?

True, O Christians! This day is a day of enmity and horror, a day of wrath and vengeance. But if that is so, then what will become of us when the earth is no longer firm beneath our feet and the heavens are no longer calm above us? Whither shall we run from the quaking earth? How shall we come out from under the threatening sky? Look with all diligence upon Golgotha: there also, where is seen the concentration of all affliction, you will discover your refuge. At that time, when The earth shook and was made to tremble, and the foundations of the mountains were troubled and were shaken, because God was angry with them (Ps. 17:7), do you not see how unshakably stands the tree of the Cross that cannot be uprooted? Then, while even the dead are disturbed in their tombs, do you not see how peacefully the Crucified One rests upon His cross, no matter how they tried to tear from Him His very glory, saying, Come down from the cross; the very dignity of the Son of God, saying, If thou art the Son of God, come down from the cross; and even the very goodness of faith in Him, saying, Let Him come down from the cross, and will shall believe in Him? Thus, let us affirm in our hearts this truth strange and terrible for the world, but joyful for those who believe: that there is nothing in the world more firm than the Cross or more safe than the Crucified One. That is why the horrors of Golgotha are disseminated all over the world—so that seeing safety nowhere we might run straight to Golgotha and throw ourselves at the feet, hide ourselves in wounds, and immerse ourselves in the sufferings of our Crucified Savior. O sun! Why do you hide your face from Him at midday, when the great works of darkness have reached their midnight even under your light, and when the eyes of the All-Seeing are ten thousand times brighter (Sir. 23:18) than yours and see in darkness just as easily in the light the infamy of deicide? So! In your deep indignation the greater instruction might have been impressed upon us; you too hastily closed the visible day of enmity and wrath, that you might lead us to the contemplated day of love and mercy, illuminated by the never-waning light of the three-sunned Divinity.

O Christian! Let darkness cover the earth! Let there be gross darkness upon the nations! (Is. 60:1) Arise from fear and perplexity! Shine with faith and hope! Through the darkness shall come thy light (cf. Is. 60:2-3). Go the way that opens to you the veil of mysteries rent in twain; enter the inner Sanctuary of Jesus’ sufferings, leaving behind you the outer court that is given over to the pagans’ derision. What is in the Sanctuary? Nothing but the holy and blessed love of the Father, Son, and Holy Spirit for the sinful and cursed human race.

The love of the Father is crucifying.

The love of the Son is crucified.

The love of the Holy Spirit is the triumphant power of the Cross.

For God so loved the World!

Of this love, O Christian, allow us to keep a certain silence before you, inasmuch as it is impossible to speak of it, so much so that even the Word of God was silent on the cross as the only way to perfectly convey it. Let this Word and this love grant us also to keep silence and heed the silence, just as the children of one mother understand each other through the heart, mutually, without words.

Thus, who crucifies the Son of God? The soldiers? They are no more than instruments of torment, like the cross and the nails. Pilate? He seems to have exhausted every effort to defend the Rightous One and solemnly announced his unwillingness to take the curse of His blood on himself: He took water, and washed his hands before the multitude, saying, I am innocent of the blood of this just person: see ye to it (Mt. 27:24). The people? How could they seek the blood of the One Whom they sought to enthrone as King? The high priests? The elders? The Pharisees? They admit that they have no authority over anyone’s life: It is not lawful for us to put any man to death (Jn. 18:31). The betrayer [Judas]? He had already witnessed in the temple that he betrayed the innocent blood (Mt. 27:4). The prince of darkness? He could not even take the life of Job; he himself is now condemned and cast out. But who could know the crucifiers better than the Crucified? And what does He say? They know not what they do (Lk. 23:24). Caiaphas touched upon the true reason when he said, It is expedient for us, that one man should die for the people, and that the whole nation perish not: just the same—this spake he not of himself: but being high priest that year (Jn. 11:50, 51). He sounded forth like a cymbal whose duty it was to announce that day for the church, but he himself did not understand his own good tidings. Thus, what they did not want, could not do, and did not know was performed before the whole world by those very ones who did not want it, could not do it, and did not know it.

Incidentally, this does not mean that there were no guilty parties to the murder of the Innocent! No! Who was not able if he only wished it to understand what even the despairing Judas understood and preached? However, Had they known it, they would not have crucified the Lord of glory (1 Cor. 2:8).

We must note here what a contemptible spider’s web all the visible causes weave to make up the great event on Golgotha. How is it that this web was not torn apart in its earliest threads, either from the breath of God’s wrath, or even from the wind of human vanity? Who bound the lion of Judah with it? How was done that which they did not want, were not able, and did not know to do, and which would have been so easy to understand and prevent? No! “The blasphemers of Golgotha knew no more what they said than the crucifiers knew what they did; in fact”[1] God’s greatness is not mocked here by humans, but rather God’s Providence makes sport of human frenzy, “without violating their freedom”[2] inducing them to serve its most exalted wisdom. Deceitful slaves are not deceiving the Lord, but the All-Good Father is not sparing the Son, so that the deceitful slaves would not perish. Earthly enmity does not wound heavenly love—heavenly love is hidden in earthly enmity, so that by the death of love it might kill enmity and spread the light and life of love through the darkness of this vale of death. For God so loved the world, that he gave his only begotten Son, that whosoever believeth in him should not perish, but have everlasting life (Jn. 3:16).

It would seem that when we delve into the mystery of the crucifixion and perceive in the sufferings of the Son of God the will of His Father, we are more apt to feel the terribleness of His righteous judgment than the sweetness of His love. However this should assure us not of the absence of that love itself, but only of our inability and unreadiness to accept what it suggests. He that feareth is not made perfect in love (1 Jn. 4:18), says the disciple of love. Let us cleanse and broaden our eye with love, and where it has been mixed with the fear of God’s judgment, let us delight in the vision of God’s love.

[2] These words are not in some editions.

Bishop George 3 мая 2013, 22:00
This only about half of the sermon. It is one of the most beautiful sermons ever. The full translation is in the 1992, No.2 issue of Orthodox Life, published in Holy Cross Monastery, Jordanville, NY.