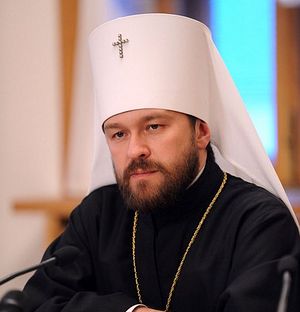 The Moscow Patriarchate said that foreign forces supporting the Syrian opposition were trying to destroy Christianity in the region.

"Unfortunately, the position of the Christian community in Syria is extremely difficult. The radical Islamist forces, which are currently pursuing the power, have a goal to destroy Christianity completely, to force out Christians completely out of the region. In the areas where radicals come to power, Christians are virtually destroyed completely," head of the Department for External Church Relations Metropolitan Hilarion of Volokolamsk said in his 'Church and the World' program at Rossiya-24 TV channel.

"I think they'd never achieve such success if they weren't sponsored from abroad. Unfortunately, the West has political forces, which for some reason have decided to support these people financially. Certain political forces in the countries of the Arab Peninsula help them as well, thus the influence from the outside is evident," the Metropolitan said.

Metropolitan Hilarion said that he had repeatedly raised the issue of harassment of Christians in the Middle East and that he had spoken about it at the UN and at many other international venues.

"And I've noticed that every time my speeches were met by silent rejection. No one denied anything, but no one wanted to listen to this either, because it appears that the powers, which currently support the so-called opposition, have no plans to preserve Christianity in this region," he said.

The very existence of the Orthodox Church of Antioch is being threatened today, Metropolitan said. The enthronement of the Patriarch of Antioch has taken place recently first in Damascus and then in Beirut. And guests from other local Orthodox Churches were able to come to Beirut only "because they couldn't come to war-torn Syria."

"Many Christian leaders of this region, of Syria, of Lebanon, have told me that all their hopes were with Russia because only Russia was calling for the peaceful settlement of this conflict," he said.