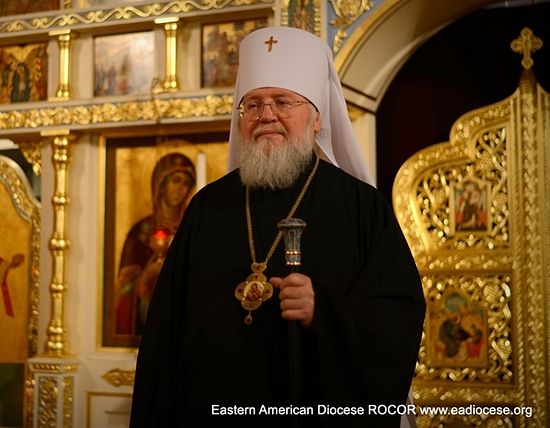 After the retirement of Archbishop Mark after thirty years of faithful service to the Diocese of Great Britain and Ireland (ROCOR), His Eminence, Metropolitan Hilarion (Kapral) has taken over the administration of the Diocese. He will be visiting his flock in the UK with Protodeacon Denis Lvov.

He will be in the UK from January 21 to 31. The diocese has its origins in the aftermath of the Russian Revolution, though there has been a Russian Orthodox presence in Britain for 300 years. A full itinerary of his visit can be found on the Diocesan website.

He will visit the Church of St Elisabeth the New Martyr, Wallasey in Merseyside, the Church of the Mother of God, the Joy of those who Sorrow, Mettingham, Suffolk and the Church of St John of Shanghai, Colchester, Essex before travelling to London to preside at his Cathedral of the Mother of God and the Royal Martyrs in Chiswick on the weekend of the 28th and the 29th January. At the Church of St. Elizabeth, on January 22, he will serve in the former cemetery chapel which has been transformed into a thriving parish since his last visit six years ago. Full details can be found on the parish website.

While he is in London he will make plans for his next visit and for the Great Consecration of the Cathedral in September 2017. He will visit His Eminence Archbishop Elisey of Sorouzh on Monday, January 30 for a tour of the newly restored Cathedral in Kensington and to discuss the needs of Russian Orthodox faithful in the UK over lunch. The diocese is delighted to welcome its new ruling bishop and looks forward to many more visits in the future.

Monk Mark16 января 2017, 02:00
Anthony - Vladyka is a shepherd who is responsible for all of his flock in whatever corner of this fallen world they may be.

Kallistos14 января 2017, 02:00
His Eminence is visiting the Orthodox flock. His visit is spiritual, not political, nor an endorsement of that government. They should not be held responsible, nor punished, for the miserable actions of U.K. politicians. (And if you think the U.K. should be condemned, then what should be measured out to the miserable crowd in Washington DC. It is from there that most of the world's misery and sorrow originates).

Anthony12 января 2017, 23:00
The UK - one of the world's biggest state sponsors of terrorism (see Syria for further details). This same UK who banned three Christian bishops from Iraq from entering their country (not forgetting their disgusting role in destroying that country) - His Eminence simply shouldn't waste his time.