St. Moses the Archbishop of Novgorod 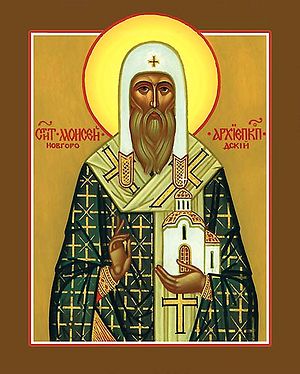 Saint Moses, Archbishop of Novgorod (1325-1330, 1352-1359), in the world Metrophanes, was born at Novgorod. In his youth he secretly left his home and entered Tver’s Otroch monastery, where he became a monk. His parents found him, and at their insistence he transferred to a monastery near Novgorod. At this monastery he was ordained as a hieromonk, and later he was appointed archimandrite of the Yuriev monastery.

After the death of Archbishop David of Novgorod, Saint Peter (December 21) consecrated Moses as Archbishop of Novgorod in 1325. This was the first episcopal consecration to be performed in Moscow. Saint Moses did not guide his Novgorod flock for long, however. The quarrels and contentious factions, the conflagrations and other misfortunes weighed heavily on his soul, which sought monastic solitude. After four years, he petitioned to be allowed to retire and live in asceticism. He was succeeded by Saint Basil.

In 1330 the saint withdrew to the Kolmov monastery for tranquillity. He did not remain here very long, either. He found a desolate spot at Derevyanitsa, where he built the stone church of the Resurrection of Christ. At this place the monk spent more than twenty years at monastic deeds. After Basil’s death, Saint Moses yielded to the requests of the Novgorod people to be their archpastor once again. The ancient chronicler describes Saint Moses in this way: “He shepherded his flock as a good pastor; he defended the downtrodden, and protected destitute widows; he employed a company of copyists, and because of him many books were written, and he confirmed many in piety by his guidance.”

Archbishop Moses continued as hierarch for seven years, a period marked by the building of many churches in Novgorod and its environs. In 1352 the saint built a stone church in honor of the Dormition of the Most Holy Theotokos at Volotova; in 1355 a monastery was built in a place named Skovorodka, with a stone church in honor of the holy Archangel Michael. In 1357, churches were also built at three monasteries: at Radogovitsa near the Volotov Dormition church, at the Holy Spirit monastery, and at a women’s monastery. The churches were named for Saint John the Theologian (the first and third of these monasteries were founded by Saint Moses).

In 1359, feeling weak and sick, the saint withdrew into the Monastery of the Archangel Michael in Skovorodsk which he had founded. Saint Moses labored here in asceticism until his death on January 25, 1362. He was buried at the cathedral church.

Archbishop Sergius of Novgorod, who came there from Moscow in 1484, ordered a priest to open the grave of Saint Moses. “I dare not be so bold as to open up the relics of the hierarch. It is your task as hierarch to open the grave of a hierarch,” he answered. “Look what is on this corpse,” said the infuriated archbishop, but he was soon punished. He went insane, and was not able to govern the diocese and did not become well until he took the schema at the Khutyn monastery. He died in 1504 at the Trinity-Sergiev monastery).

The Feast of Saint Moses on April 19 commemorates the uncovering of his incorrupt relics in 1686.