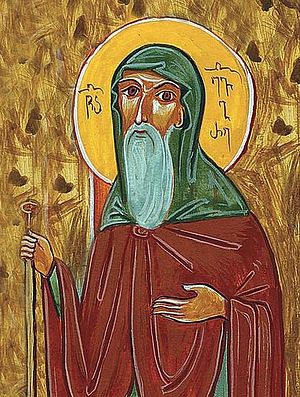 Saint Evagrisi was born to God-fearing and pious parents who read the Holy Scriptures to him from the earliest years of his childhood. When he reached manhood, Evagrisi became ruler of Tsikhedidi.

One day Evagrisi went hunting in the Sarkineti Mountains where Shio of Mgvime had settled. While he was hunting, his companions dispersed in various directions, and he was left alone to survey his surroundings. There he beheld a bird, resembling a dove, on its way to bring food to Fr. Shio, and noted the place where it landed.

The next day he located the hermit’s cave dwelling.

Astonished at Fr. Shio’s strict asceticism, Saint Evagrisi was filled with holy envy, having a desire to emulate the hermit, and he told him, “God is truly alive. I will not leave you, I will not go back.” Saint Shio advised him to be wary of such an impulsive decision, since it would be quite difficult for a man who had grown up in luxury to suddenly begin a new life in the wilderness. But Evagrisi answered him firmly, “Even if it means I must die here with you today, I will not depart from this place.”

In order to test his faith, Saint Shio entrusted Evagrisi with his staff and instructed him, saying, “Put my staff in the Mtkvari River; it will part the water and clear a path for you to cross. Secure your home and return to me. On your return when you reach the Mtkvari, use my staff again to clear a path for yourself. If it fails, then continue on your way as before. That would mean that it is not God’s will to fulfill your desire.”

Evagrisi obediently took Saint Shio’s staff and touched it to the water of the Mtkvari. The river parted, and he crossed confidently to the other side.

Having returned to the palace, Evagrisi distributed all his possessions to the poor, secured his home, and set off again to find Fr. Shio. He performed the same miracle on his return: the river parted in two, and the faithful Evagrisi passed through.

Fr. Shio tonsured Evagrisi into the monastic life, and the former ruler settled near the holy father’s cave. There he learned to be patient and watchful and how to pray, while acquiring other virtues as fruits of his ascetic labors.

Saint Shio anticipated that the number of monks in the wilderness would multiply, and he built a church for them in a place that God had revealed. The great gifts of the holy fathers were soon made known, and many pilgrims journeyed to the Sarkineti Mountains to receive their blessings. When King Parsman heard, belatedly, that his beloved army chief had been tonsured a monk, he became sorrowful and personally traveled to Saint Shio’s wilderness. His hope was to bring Evagrisi back into the world, but the blessed father responded with monastic composure: “O King! Why are you disturbing me, a man born to serve God, by asking me to become like a dog who returns to his own vomit (c.f. Prov. 26:11)?”

The news of Saint Shio, Evagrisi, and the other holy strugglers spread throughout Georgia, and many laymen were inspired to enter the monastic life.

After many years Saint Shio grew old, and he gathered the brotherhood of monks around him. “You must choose one from among you to lead this community. From now on I will labor in the well that I have prepared for my grave,” he told them. The brothers were exceedingly sorrowful at having to part with their beloved teacher, and in vain they pleaded with him to remain at the monastery. At last they asked Fr. Shio to appoint a successor, and he chose Evagrisi as the monastery’s next abbot.

The humble, gracious Evagrisi objected to this appointment, considering himself unfit to fulfill such a difficult responsibility. He begged Saint Shio to reconsider his decision, but the elder simply responded, “If you consent to our will, you will receive a joyous reward from God: when He returns in His glory, He will repay you for your obedience.”

At last Saint Evagrisi accepted his teacher’s counsel, and he directed the monastery’s activity with the help of God from that day forward.