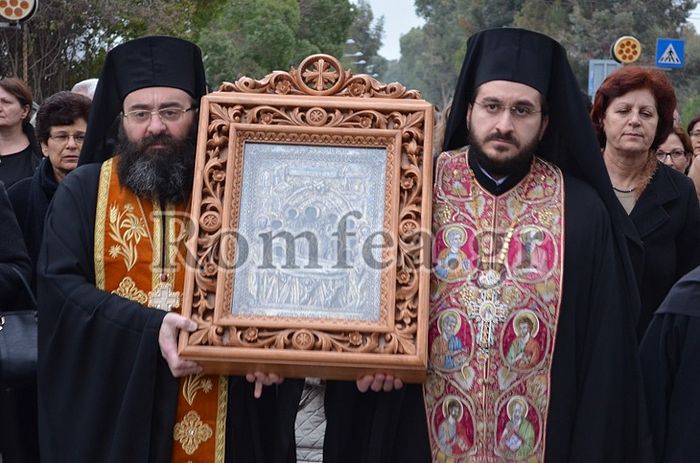 With great joy and excitement, the faithful of the parish of the Apostle and Evangelist Mark in Strovolos, Cyprus, in the Nicosia District, welcomed on February 11 the miraculous and myrrh-streaming Dormition icon of the Panagia Malevi from the Dormition Monastery in the Parnonos Mountain region in Greece.

The miraculous icon was brought to Cyprus by Metropolitan Alexander of Mantineia and Kynouria, accompanied by His Grace Bishop Nektarios of Arsinoe as well as a number of clergy and nuns. It was received on the street and led to the church in procession, accompanied by the Lakatamia Philharmonic orchestra. Faithful showered the icon with rose petals at the door of the church, reports Romfea.

The icon was placed on an analoy in the center of the temple for the veneration of the faithful, including Bishop Isaiah of Tamassos, who had come to lay down their requests and prayers before the holy image of the Mother of God. Great Vespers was served by Met. Alexander immediately following the festive reception. Before the end of the service, the rector of the local parish as well as Bp. Nektarios thanked Met. Alexander for bringing the holy icon for the strengthening of the Cypriot people “who for forty-three years now have been under the boot of the barbarian invader.”

“Please, your eminence, remember our island and our Church always in your prayers, that we might be rid of our passions, and also of the Turkish invading tyrant that invades the land of our ancestors,” Bp. Nektarios remarked.

For his turn, Met. Alexander noted that the Mother of God, affectionately known as the “Panagia” (“All-Holy”) by the Greeks, loves to visit holy places and to assist the faithful who come seeking her prayerful protection. In closing he expressed the hope that the Theotokos would protect and comfort the people of Cyprus and lead them into freedom from their Turkish oppressors.

The Panagia Malevi icon is believe to be one of the seventy painted by the Apostle and Evangelist Luke. The icon was found in its current place illumined by divine light. Three unsuccessful attempts were made to move the icon, so a church was built over it in 1116. The history of the icon and the Malevi Monastery can be read here. 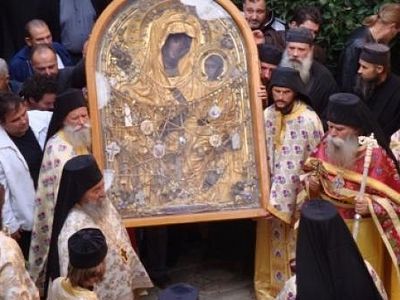 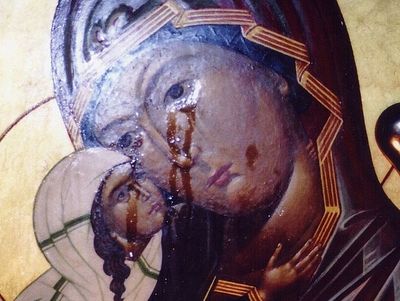 "Where she goes she brings peace and love"
An interview about the wonder-working icon of St. Anna

"Where She Goes She Brings Peace and Love"
An Interview About the Wonder-Working Icon of St. Anna
Frederica Mathewes-Green, Archimandrite Athanasy (Mastalski)
St. Anna was indeed our ambassador of good will. We know that she is the grandmother of Christ, and she traveled to be everyone’s grandmother. 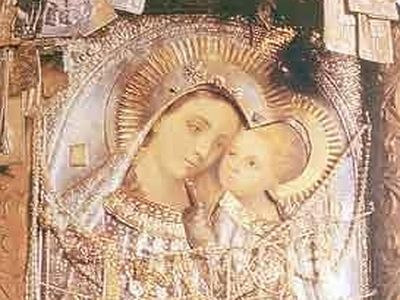 Anthony14 февраля 2017, 20:00
Prophetic words spoken by Pater Nektarie when he asks for prayers to help rid us Greeks in Cyprus of our passions and the turks. Ayios Paisios Ayioreitis said the same thing. When we rid ourselves of our passions, and build spiritual bases (monasteries) then the turk and english militaries will also leave our island. And that's right. Evil is like a parasitic magnet that simply attracts more evil. Therefore if we manage to rid our hearts of evil passions then those blood stained nations that embody evil ie the english and turks will no longer be able to occupy our land. Evil cannot abide in holiness.
×