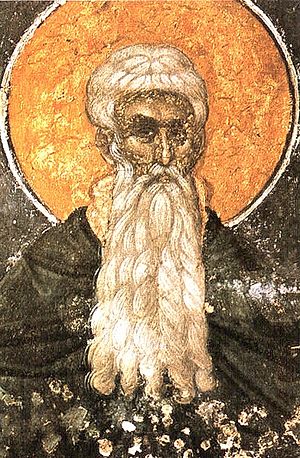 Saint Arsenius the Great was born in the year 354 at Rome into a pious Christian family, which provided him a fine education and upbringing. He studied rhetoric and philosophy, and mastered the Latin and Greek languages. Saint Arsenius gave up philosophy and the vanity of worldly life, seeking instead the true wisdom praised by Saint James “pure, peaceable, gentle, and easy to be entreated, full of mercy and good fruits” (Jas. 3:17). He entered the ranks of the clergy as a deacon in one of the Roman churches, dedicating himself to the service of God.

The emperor Theodosius (379-395), who ruled the eastern half of the Roman Empire, heard about his erudition and piety, and he wished to entrust Arsenius with the education of his sons Arcadius and Honorius. Arsenius, however, protested that he had given up secular studies in order to serve God. Against his will, but in obedience to the will of Pope Damasus (December 11), Saint Arsenius agreed to teach the imperial children, hoping to teach them Christian piety as well.

When he arrived at Constantinople, Arsenius was received with great honor by the emperor Theodosius, who charged him to educate his sons not only in wisdom, but also in piety, guarding them from the temptations of youth. “Forget that they are the emperor’s sons,” said Theodosius, “for I want them to submit to you in all things, as to their father and teacher.”

With fervor the saint devoted himself to the education of the youths, but the high esteem in which he was held troubled his spirit, which yearned for the quietude of monastic life. Saint Arsenius entreated the Lord to show him the way to salvation. The Lord heard his prayer and one time he heard a voice telling him, “Arsenius, flee from men, and you shall be saved.” And then, removing his rich clothing and replacing it with old and tattered garments, he secretly left the palace, boarded a ship for Alexandria, and he made his way to Sketis, a monastery in the midst of the desert.

Arriving at the church, he asked the priests to accept him into the monastic brotherhood, calling himself a wretched wanderer, though his very manner betrayed him as a cultivated man. The brethren led him to Abba John the Dwarf (November 9), famed for his holiness of life. He, wishing to test the newcomer’s humility, did not seat Arsenius with the monks for the trapeza meal. He threw him a piece of dry bread saying, “Eat if you wish.” Saint Arsenius got down on his hands and knees, and picked up the bread with his mouth. Then he crawled off into a corner and ate it. Seeing this, Elder John said, “He will be a great ascetic!” Then accepting Arsenius with love, he tonsured him into monasticism.

Saint Arsenius zealously passed through his obediences and soon he surpassed many of the desert Fathers in asceticism. The saint again heard the Voice while he was praying, “Arsenius, hide from people and dwell in silence, this is the root of virtue.” From that moment Saint Arsenius settled in a solitary cell deep in the desert.

Having taken on the struggle of silence he seldom left his seclusion. He came to church only on Sundays and Feast days, observing complete silence and conversing with no one. When Abba Moses asked him why he hid himself from people, Saint Arsenius replied, “God knows that I love you, but I cannot remain with God and with men at the same time. The Heavenly Powers all have one will and praise God together. On earth, however, there are many human wills, and each man has his own thoughts. I cannot leave God in order to live with people.”

Though absorbed in constant prayer, the saint did not refuse visiting monks with his counsel and guidance, giving short, but perceptive answers to their questions. Once, a monk from Sketis saw the great Elder through a window standing at prayer, surrounded by a flame.

The handicraft of Saint Arsenius was to weave baskets, for which he used the fronds of date palms soaked in water. For a whole year Saint Arsenius did not change the water in the container, but merely added a little water to it from time to time. This caused his cell to be permeated with a foul stench. When asked why he did this, the saint replied that it was fitting for him to humble himself in this way, because in the world he had used incense and fragrant oils. He prayed that after death he would not experience the stench of hell.

The fame of the great ascetic spread far, and many wanted to see him, and they disturbed his tranquility. As a result, the saint was forced to move around from place to place. But those thirsting to receive his guidance and blessing still found him.

Saint Arsenius taught that many take upon themselves great deeds of repentance, fasting, and vigil, but it is rare for someone to guard his soul from pride, greed, jealousy, hatred of one’s brother, remembrance of wrongs, and judgment. In this they resemble graves which are decorated outwardly, but filled with stinking bones.

The monks heard how the saint often urged himself on in his efforts with the words, “Rouse yourself, Arsenius, work! Do not remain idle! You have not come here to rest, but to labor.” He also said, “I have often regretted the words I have spoken, but I have never regretted my silence.”

The great ascetic and keeper of silence was given the gift of tears with which his eyes were constantly filled. He spent fifty-five years at monastic labors and struggles. He spent forty years at Sketis, and ten years on the mountain of Troe near Memphis. Then he spent three years at Canopus, and two more years at Troe, where he fell asleep in the Lord.

Our holy, God-bearing Father Arsenius reposed when he was nearly one hundred years old, in the year 449 or 450.

His only disciples seem to have been Alexander, Zoilos, and Daniel (June 7).

By a flood of tears you made the desert fertile, / And your longing for God brought forth fruits in abundance. / By the radiance of miracles you illumined the whole universe. / O our holy Father Arsenius, pray to Christ our God to save our souls!

Arising from Rome, as a sun, you reached the royal city, / Enlightening it, O most blessed one, by your words and deeds. / You drove out the darkness of unreasoning. / Therefore we honor you, Arsenius, the glory of the Fathers!