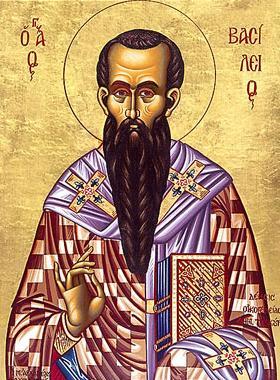 Very few of us realize that the beginning of the Church calendar does not start on January 1st. Actually, our Church calendar begins on September 1st. In our daily living, however, with our friends and neighbors and our society, our year begins on January 1st. This is a very important date in our Church since it marks the Feast Day of one of our greatest saints, St. Basil the Great.

St. Basil was born in the year 330 AD in the city of Caesarea, Asia Minor. He was one of six children who all became saints in our Church. His brothers and sister became priests, bishops, and nuns. His parents were very devoted to the faith and gave their children a great spiritual heritage which they cultivated in their lifetime. The family of St. Basil was the greatest Christian family of the 4th century. St. Basil studied in Constantinople and Athens. He studied with his best friend, St. Gregory, in the cultural centers of the world. St. Basil was one of the greatest writers and speakers of the Christian Church. Although his fame was spread over the entire Christian world of his day, he returned to his own home town and was ordained Bishop of Caesarea on June 14, 370 AD.

St. Basil was an authority on the monastic life. He formulated the rules and regulations for the monks of his day, and these rules still prevail in most of the Christian monasteries of the world. St. Basil prepared the Divine Liturgy which we love and know so well. Although the Liturgy of St. John Chrysostom is used 42 Sundays a year in our Church, it is based on the slightly longer Divine Liturgy of St. Basil. St. John merely shortened the lengthy prayers and made minor alterations in other prayers. The Liturgy of St. Basil is celebrated ten times each year: during the Lenten period, Christmas Eve, and on January 1st, the anniversary of his death.

St. Basil was indeed one of the greatest pillars of the Church. He loved children and always assisted the sick and the homeless. He was the first bishop to establish orphanages and hospitals and old age homes. He first directed the attention of the Church to these unfortunate victims of society.

Why was St. Basil given the name "Great"? Only a few people in the world were ever given the magnificent title, "Great"! Alexander the Great was so-called because he conquered the world, but St. Basil was called "Great" because he conquered the hearts and souls of men for Jesus Christ. His whole life was dedicated to Jesus and the message of Christianity. He had the humility of Moses, the zeal of Elijah, the piety of Peter, the eloquence of John the Theologian, and the dedication of Paul. He died in the Lord on January 1, 379 AD.

You became for the Church a solid foundation, and for all mankind strengthened by your teaching, you became a harbor of refuge, O Venerable Basil who reveals heaven's mysteries!

A Greek Tradition for Observing the Feast at Home

In many Greek homes, a special cake is baked on the eve of St. Basil's Day (January 1st) with a gold or silver coin hidden inside. In the evening, just before midnight strikes and the new [calendar] year begins, all the lights are turned off for a minute to signify the dawning of a New Year. The family gaily exchanges wishes for "A Happy New Year!" and the cake is cut: one slice for St. Basil, one for each family member, one for each of the pets, and then the largest slice of all is cut for the poor people of the world. In one of these slices is hidden the coin, which brings blessings to its recipient throughout the year.

The tradition of the Vassilopitta began long ago in the days when St. Basil was the Archbishop of Caesarea in the province of Cappadocia. The Emperor Valens of Cappadocia belonged to a group known as the Arians. The Arians were very much against the Orthodox teachings of St. Basil and tried hard to destroy him and his people. In order to do this, the Emperor sent a very stern soldier to warn St. Basil that all the people in his district would soon have all their earthly belongings taken from them and their city would be completely stricken with poverty and starvation. He further warned that St. Basil himself would have to make a choice between Orthodoxy and death.

St. Basil, a true friend of the poor, could not bear to see his people destroyed by the wicked Emperor, and so he called a meeting of all the kind and rich men in his district. He persuaded them to contribute money and jewels to be given to the Emperor so that the poor and needy would not be robbed. This was done, and on New Year's Eve, St. Basil again met with the Emperor's soldier. He presented to him the wonderful gifts of the good people of Caesarea. At the same time, St. Basil also answered the threat against his own life by saying:

"Fire, death by the sword and the beasts that tear our flesh with their long nails, give us joy rather than fear. You may insult; you may threaten; you may do whatever you like to enjoy your power, but let the Emperor know that even his worst threats will not persuade us to compromise with impiety."

When the soldier heard all this, he was so moved and impressed that he promised never to bother St. Basil again. Even more surprising, he refused to accept the money and valuables that St. Basil had collected for the Emperor.

The original source for this wonderful summary of the Vassilopitta tradition is unknown.

© 1997 by Orthodox Family Life and the original author(s).