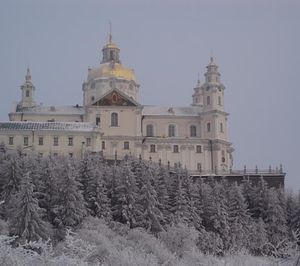 Pochaev Lavra in winter. Photo: Markel / katehizis.ru
There are words in the Holy Scriptures that are a source of inspiration for the many millions of people who read them: Ye that thirst, go to the water (Is. 55:1); Draw ye therefore water with joy out of the wells of salvation! (Is. 12:3), said the Prophet Isaiah. A sunny, light-bearing play of words: desert—well—water—joy—salvation…

When Count Frilei, the unworthy heir of Anna Goiskaya (who bequeathed land to Pochaev monastery) reclaimed land from the Monastery, St. Job and the brothers began digging a well right on the top of the cliff. There were some “doubting Thomases” amongst the brethren, who told the saint that nothing would come of his scheme. But Abbot Job Zhelezo was true to his name—zhelezo means iron—he even now had an iron will, and was unbending. He gave the order over and over again to continue the work. Thus, at a depth of forty-three meters, water began to seep through the rocks.

Four hundred years have passed, and today the thousands of pilgrims to the Lavra are still drawing water from that well for the healing of their ailments.

I can picture it now: the Lavra, 1978, late evening after the meal.

In the scullery the light is burning bright, you can hear the clatter of dishes being washed, the washtub is full of hot water, and we are at work washing dishes. Winter is all around, it’s cold outside, but the bright light and hot water make it warm where we are. Misha Bal from Poltava, Alexander (the future Hierodeacon Savva) and I are washing dishes like experts. Fr. Ignatius (Archdeacon Hilarion), who was in charge of the refectory, is yelling and scolding us for breaking too many dishes when we wash. “What are you doing with those dishes? Washing them or breaking them?! Here, I’ll show you how to do it!” He ran up to the washtub, took a plate, and—crunch!—broke one himself. Put to shame, he ran off grimacing comically.

Then novice Igor Brus walked up and told me conspiratorially, “Don’t sleep tonight, or you’ll sleep through the whole Kingdom of Heaven! Come at midnight to the well. We’ll look at the bottom and see if the Lord will give us a sign—if it will “boil” as it is blessed. Tomorrow is the “Jordan” [that is, the Great Blessing of the Waters that takes place at a water source on the feast of Theophany], don’t you know?”

I was incredibly tired, but just as curious. Overcoming my sleepiness, I came. I thought that it would just be Igor and I, but I was mistaken. Archimandrite Alypy, Abbot Apelly, Monk Nestor the choirmaster, head hierodeacons Cassian and Roman also came, as well as novice Vasily the prosphora baker. They surrounded the well so tightly that I could hardly elbow my way through. Fr. Apelly had a red, powerful floodlight with six batteries. That was a powerful and rare thing in those days. The other priests also had flashlights, but they weren’t as strong. Fr. Apelly illuminated the entire area around the well.

We were talking and waiting for twelve o’clock to come. The conversation flowed at its own unhurried pace. They say that one year they saw it, but last year and the year before, nothing happened…

I don’t know whether it was midnight or not, but as if in a wondrous dream, we began to notice something out of the ordinary.

Tiny sparks began to fly around within the well shaft. “What is that?” I asked. “Keep watching, you’ll see!” said Fr. Apelly. The sparks were like little stars of frost, absolutely white. At first there were only a few, appearing rarely, and there were more and more. A veritable storm arose inside the well. Flying one by one to the surface and then down to the very bottom of the well and touching it, the water there suddenly came alive and boiled with a noise. We could hear the noise, but not of bubbling—it was a light, quiet fizzing, even a buzzing, like a swarm of insects. All of us there were excited, we were talking and interrupting each other, the young interrupting the old, and it was alright. Everyone was in an extraordinarily good mood at the sight of this mystery; any weariness or sleep just disappeared. We sang over and over again, “When thou, O Lord, wast baptized in the Jordan…” [the troparion of the feast of Theophany].

Like everyone else, I was filled to overflowing with my reward for a nearly sleepless night.

“The voice of the Lord upon the waters cries aloud saying: ‘Come ye all, and receive the Spirit…” [from the rite of the Great Blessing of the Waters].

Many years have gone by, but I remember that blessed night! And I will probably remember it to the end of my days…

Archimandrite Avvakum from Kremenchuk
Orthodoxy in the Ukraine
Translation by OrthoChristian.com