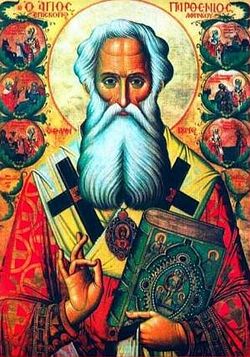 On the northbound road near the port of Chalkis is the little inland town of Psahna, and a few kilometers east in the rolling hills is the women's monastery of Makrimali, a beautiful eight-hundred-year-old foundation, with many outlying metochia. A tranquil site, the monastery has only a few nuns, but it treasures the relics of one of the most noted hierarchs of early Christianity.

St. Parthenius was born in Melitopolis in Asia Minor in the late third century. Although his father was a deacon, the family was poor and the boy unschooled. His continual presence in church, however, and an excellent memory gave him a deep understanding of services and Holy Scripture. Even as a youth he was generous, and he gave the money he earned from fishing to the poor. By the time he was eighteen he was so grace-filled that he began working miracles and casting out demons. His virtue came to the attention of Bishop Philip of Melitopolis who undertook his education and ordained him a priest. Shortly after Constantine the Great came to power, Archbishop Achilles of Cyzicus consecrated Parthenius bishop of Lampsacus, a diocese of Asia Minor. The year was 325, and after Parthenius's episcopal consecration he set off to petition the emperor to permit him to raze the pagan temple in Lampsacus and construct a Christian church. The emperor not only agreed but also provided him with funds to build the church. One day, a huge stone intended for the future altar was hauled from the site of the destroyed temple, the wagon on which it was carried overturned and the driver was killed. Understanding that this was the work of the evil on who was angered by the destruction of the temple, St. Parthenius prayed, and the driver returned to life.

The saint was known throughout the region as a great healer of both physical and spiritual ailments, particularly for those possessed by demons. One of his early biographers says, "So great was his mercy, so great the people's love for him, that none in that region even knew what a physician was." His fame as a victor over the power of the evil one increased with his years. In one famous narrative, he expelled a demon from a man afflicted from childhood. The exorcised demon began to bargain with the saint for another place of habitation in exchange for his expulsion. The saint agreed, and opening his mouth, said to the demon, “Enter and inhabit me." The demon cried out in anguish, "How shall I enter God's house?" and then disappeared.

St. Parthenius reposed peacefully and was buried in a chapel he had built next to the Cathedral of Lampsacus. His feast-day is celebrated on February 7/20.