The Acquisition Of Humility 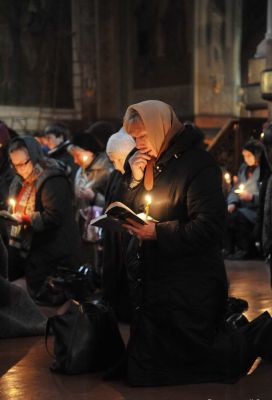 Among the imperatives of the Christian moral life, I wonder if any is the occasion of more bewilderment than the call to be humble. This impression arises not only from my own experience of the problem but also from the many times other Christians have asked me,

“How can I learn humility?”

If humility were simply one of the moral virtues—as it is often treated—its acquisition would be rather simple, I think. A person would first define humility, as an ideal, and then bring his conduct, as far as possible, into conformity with that ideal. This is, after all, the way someone attains other moral virtues, such as justice and prudence. We have always known, from the time of Aristotle, that a person attains justice and prudence by acting justly and prudently.

Little reflection is needed, I think, to detect a problem in this approach. That is: Although the person who acts justly and prudently will likely become just and prudent, it is not so obvious that the one who acts humbly will become humble. Humility is more subtle; indeed, the acquisition of humility can easily become the occasion of a special sort of pride.

The Christian ascetical tradition, in which the acquisition of humility is a matter of serious concern, has always recognized the problem. According to this tradition, Christian humility sits atop an ascending ladder, marked with certain discernable steps, some of which may not appear-to the uninformed observer-to be directly concerned with humility.

Let us consider the first step, which involves the sustained and conscious effort to cultivate a sense of God’s presence to the conscience. According to St. Benedict,

so it is, also, the beginning of humility.

In other words, the man who seeks humility must start on the ladder’s first rung, which is a great moral effort, explicitly set under the divine gaze. St. Gregory the Dialoguist, in his account of St. Benedict, wrote of this experience. Benedict, he said,

“dwelt alone with himself, in the sight of his Creator, who beholds the hearts of all men” (Dialogues 2.3).

Benedict himself describes this effort:

“Let [the monk] be ever mindful of all that God has commanded; let his thoughts constantly recur to the hell-fire which will burn for their sins those who despise God, and to the life everlasting which is prepared for those who fear Him.”

We observe that the climber, on this first step, is not thinking about humility. He is taken up, rather, with the presence of God, who searches the human heart:

“Let a man consider that God is always looking at him from heaven, that his actions are everywhere visible to the divine eyes and are constantly being reported to God by the Angels” (The Holy Rule 7).

As ladders are sometimes broader at the bottom, so in his treatment of humility, St. Benedict dedicates the greater space to that first step. The following steps are all arranged on the basis of it: abnegation of will, obedience, the cultivation of patience in trials, submission to spiritual direction, and contentment with one’s resources and opportunities.

Only at the seventh step does Benedict mention the actual struggle to act humbly; by this time, the essential foundation for acting humbly has been constructed. Still, the eighth step warns against assuming ascetical efforts outside the common monastic rule. Step nine exhorts the climber to greater silence, and the next two steps caution him against frivolity.

As for step twelve, it places the climber once again under the gaze of God, where

“he should consider himself already present at the dread Judgment.”

Most striking, I think, in St. Benedict’s description of the final step is that the climber does not seem to think of himself as humble. Indeed, he does not think of himself at all. He is taken up, rather, with the love of Christ,

“as though naturally and by habit.”