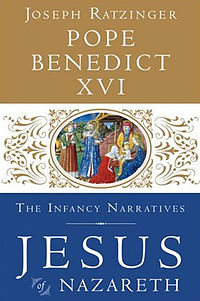 Breaking news from the Telegraph … the newspaper’s Rome reporter reports that one Joseph Ratzinger, a.k.a. the Bishop of Rome, Pontiff of the Catholic Church alias Benedictus PP. XVI, claims Jesus was not born December 25, in the year 1.

As I read this story, “Jesus was born years earlier than thought, claims Pope” I could envision the clatter of the teletype in the background with three bells ringing to tell the news room a major story had come across the wires. In a story datelined from Rome, we learn:

“The calculation of the beginning of our calendar – based on the birth of Jesus – was made by Dionysius Exiguus, who made a mistake in his calculations by several years,” the Pope writes in [Jesus of Nazareth: The Infancy Narratives], which went on sale around the world with an initial print run of a million copies. “The actual date of Jesus’s birth was several years before.”

The assertion that the Christian calendar is based on a false premise is not new – many historians believe that Christ was born sometime between 7BC and 2BC. But the fact that doubts over one of the keystones of Christian tradition have been raised by the leader of the world’s one billion Catholics is striking.

“Many historians believe” that Jesus was not born in the year 1, or 0? How about all historians for the past few hundred years — I’m not aware of any school of church scholarship that holds to the contrary view. The Telegraph reports that in addition to challenging the notion that Jesus was not born in the first year of the Gregorian calendar, the pope claims the traditional church creche is all wrong:

Christ’s birth date is not the only controversy raised by the Pope in his new book – he also said that contrary to the traditional Nativity scene, there were no oxen, donkeys or other animals at Jesus’s birth. He also weighs in on the debate over Christ’s birthplace, rejecting arguments by some scholars that he was born in Nazareth rather than Bethlehem.

Well, there goes the Christmas pageant. But why is this news? Anyone with even the remotest knowledge of the issue would not be surprised by this revelation.

It could well be ignorance on the part of the reporter, who upon reading the third volume in the pope’s Jesus of Nazareth trilogy was dumbstruck by this information and had to rush to print to tell England the news. Or, it could be that the Telegraph, aware of the abysmal level of religious knowledge and practice in England, believed that this would be news to the millions of cultural Christians in England whose only relationship to the faith were hoary memories of youthful school and church pageants. Or, this could be just another story in the series of articles from the British press that paints Benedict XVI in unflattering colors.

The article closes out with an Oxford professor’s calming assurance the pope may be right as “most academics agreed with the Pope that the Christian calendar was wrong and that Jesus was born several years earlier than commonly thought, probably between 6BC and 4BC.”

Again we have the “most academics” — I would be interested to know who are the dissenters that believe in the 25 Dec 00 date.

The signs the story was rushed in to print also comes from the selection of the expert. The Professor of the Interpretation of the Holy Scripture from Oxford is quoted on the absence of any dating in the text of the Bible as to exact time of Jesus’ birth. But the professor is allowed to move out of his area of expertise — Biblical interpretation — into Patristics or Patrology (the study of the writings of the Church Fathers and the history of the early Christian Church) and in doing so, the good professor makes a mistake.

The idea that Christ was born on Dec 25 also has no basis in historical fact. “We don’t even know which season he was born in. The whole idea of celebrating his birth during the darkest part of the year is probably linked to pagan traditions and the winter solstice.”

This claim by the Old Testament scholar about the origin of the Christmas holiday is false. While the village atheist may delight in repeating this legend, it is nonetheless untrue. A non-academic rejoinder to this “pagan traditions” claim can be found in a 2003 article “Calculating Christmas” by Prof. William Tighe in Touchstone magazine.

Many Christians think that Christians celebrate Christ’s birth on December 25th because the church fathers appropriated the date of a pagan festival. Almost no one minds, except for a few groups on the fringes of American Evangelicalism, who seem to think that this makes Christmas itself a pagan festival. But it is perhaps interesting to know that the choice of December 25th is the result of attempts among the earliest Christians to figure out the date of Jesus’ birth based on calendrical calculations that had nothing to do with pagan festivals.

Rather, the pagan festival of the “Birth of the Unconquered Son” instituted by the Roman Emperor Aurelian on 25 December 274, was almost certainly an attempt to create a pagan alternative to a date that was already of some significance to Roman Christians. Thus the “pagan origins of Christmas” is a myth without historical substance.

From this piece, should you be interested in the details you can access the academic literature. But returning to the Telegraph piece, there are some fascinating things raised in the pope’s new book — and smart fellow that he is it came out just in time for Black Friday. There is an interesting historical and religious debate mentioned by the Telegraph story, the location of Jesus’ birth: Nazareth v. Bethlehem, but that is passed over in favor of the “striking” news about the calendar question. Given the excitement over the women bishops’ vote in the Church of England the reporter may have needed to “sex-up” his story to find space in the newspaper for another religion news item. Whatever the reason, the story is a disappointment. The Telegraph is supposed to be a “quality” newspaper, but this story is worthy of the tabloids.

Cameron25 ноября 2012, 04:00
If you want to fault the reporter for the Telegraph for sensationalism, then I'd like to point to your title that reads "The Pope Hates Christmas" which is absolutely ridiculous and completely tangental to your article. Perhaps you would have done better with "The Telegraph Hates the Pope." Both closer to the truth and much less sensationalist.