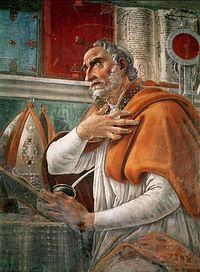 The headline and subhed:

“It is the principle of sin, rebellion against God and His truth which has brought about birth defects and other destructive natural occurrences.”

Is St. Augustine running for the Republican nomination to be Lt. Governor of Virginia? Because he wrote about this idea a long time ago! As reporter Joel Gehrke gently replied to Mr. Kaczynski:

Don’t most Christians think that the world would be perfect if not for sin?

Kaczynski then appealed to his 12 years of Catholic education to say he had never heard of such a notion. Gehrke provided links to Augustine.

It turns out all sorts of Christians teach and confess that evil is not the result of a loving God but, rather, sin. Just randomly from the Google, for instance, I found this passage on an Antiochian Orthodox Church web site explaining Holy Unction:

Sickness is the weakness of the body as a result of the sin of the world. Sickness is not the punishment from God of personal sinful behavior, per se. We all share in the consequences of sin in this world.

I hope no Orthodox Christians think about running for political office! BuzzFeed is on it!

I’m not saying Christian teaching on sin, sickness and death is easy for an uninformed person to understand. It’s not. It’s a topic that has been a challenge for Christians since Jesus first told questioners that a man’s birth defect was not the result of his sin or his parents, as had been held. He goes on to heal the defect and give everyone a larger lesson about everyone being born blind and defected.

I imagine that when some reporters read the Republican candidate’s words, they just assume the worst or even just assume that he was saying, contra what Jesus taught while performing miracles, that birth defects were caused by the personal sins of the involved parties. I haven’t read Jackson’s book, but you certainly would need far more than the passage quoted by BuzzFeed to accuse him of straying so far from traditional Christian teaching.

I know it’s the season for catching a certain type of candidate spouting Christian doctrine. But let’s work a bit harder on our understanding of basic Christian teachings before writing pieces such as BuzzFeed’s (since picked up by a few other outlets).