The Vision of the Theotokos Communing the Weary Fathers 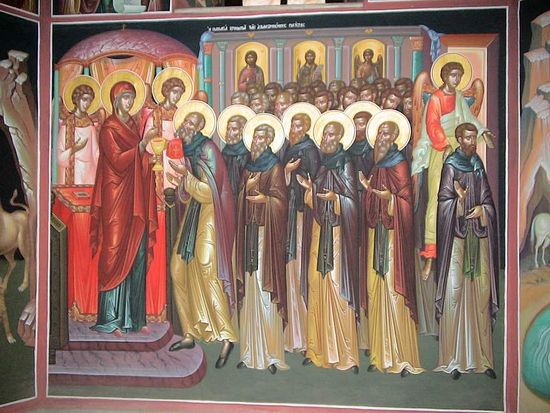 In the time of Saint Savvas there lived in his Lavra many virtuous monks who served the Lord. A noble and wealthy ruler, therefore, went there to live the monastic life, who was welcomed with joy by the Saint.

Because he was not accustomed to labor, he looked after him and did not let him go with the others to do heavy field work. There they worked until the ninth hour, and then they would come together and read the Service. After Vespers they ate once a day as a community.

Because he could not do these things, since he was a Novice, he was ordered to struggle in the Monastery as much as he could, and to fast until all the brothers returned, that they may eat together in accordance with the Rule.

However, he could not even keep this command, but he ate in his Cell, because his relatives brought him various foods.

The Saint knew this, but since that Monk was a Novice, he did not rebuke him so as not to sadden him, but only supplicated God to correct him.

Thus, the feast of the Most Holy Theotokos on the fifteenth of August came, and on the morning of the previous day, when all the brothers went to work, the Saint told them to return early that they may chant. He told the Novice to go to the church at the time of Vespers and to notify him when all the brothers gathered. So he did.

And when the fathers came, the Novice saw a wondrous vision, not sleeping but awake. That is, he saw a beautiful woman between two angels, who shined brighter than the rays of the sun. One held a cup full of heavenly bread, and the other a small cloth. And that beautiful woman, who was our Lady, held a golden spoon, and each brother came forward in his turn and the angel wiped their face with the cloth. After they venerated the Panagia, she took the spoon and gave them the heavenly bread.

Seeing this, the Novice was amazed, and when he approached to also claim the gift, the desiring one failed. Neither the angel wiped him nor did the Panagia commune him.

But she told him: "This food is the Body of my Son and it is taken by those who fast until this hour and are cleansed, yet you do not fast. How, therefore, can you commune from this Bread?"

And he said: "At least let the angel wipe me with that sacred cloth."

And she responded to him: "If you want to be wiped with this, then you also must labor with the others, because they were sweaty from their labor which is why they were wiped, but what sweat from you will the angel wipe?"

Hearing this, he ran frightened to the abbot, saying: "Did you perhaps see the vision I the unworthy one saw?

And the Saint replied to him: "That which you saw was for your correction. The brothers are informed that the Panagia sanctifies them to be worthy at every celebration to commune of the Divine Mysteries."

Since then and henceforth, therefore, he toiled more and ate less, and living thus with blessed obedience, he was made worthy of heavenly blessedness.

From The Salvation of Sinners. Translated by John Sanidopoulos.

Note: The fresco above, shocking to many, is a modern representation of this beautiful beneficial story at the Holy Monastery of Saint Savvas in the Judean Desert. It is nothing more, nothing less. When one contemplates the meaning of this image, the moral of the story above should alone be contemplated. [J.S.]