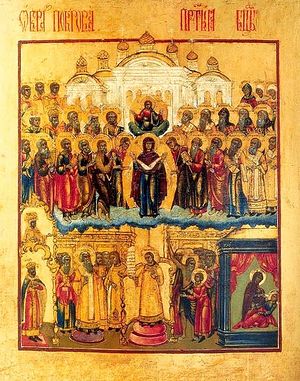 For those who celebrate the commemoration of the miraculous appearance of the Protecting Veil of the Mother of God, nothing could be more joyous than if we announced that this grace-filled Protection is spread even over us. But who could be the bearer of these glad tidings? Whose eye is capable of seeing the Most Holy Intercessor, “in the air, praying to Christ for us?” There are no obvious mystical seers like blessed Andrew and Epiphanius among us; and the hidden mysteries known only to the Lord will remain hidden unto the ages.

Nevertheless, we also, standing now in church, are not without a witness. In fact, it is the most reliable testimony that the Protection of the Most Blessed Virgin is spread also over us. Who is this witness? Not an earthly person, not even an angel, but our Protectress herself! With boldness and surety I say this on Her behalf; for isn’t Her holy and miracle working icon, which we see in this church, the constant, visible pledge of Her invisible protection?... We know from the history of miracle-working icons that in times of heaven’s wrath against human sins, these icons suddenly hid themselves and appeared in other places, or disappeared entirely. Therefore, as long as our Protectress does not abandon her place here, as long as she does not deprive her image of the grace-filled power of working miracles, as long as she receives our prayers and grants us timely help—we can, despite all our impurity, maintain a steadfast assurance that we are under her grace-filled Protection.

And can the Most Blessed Virgin not heed the prayers of those who run to her with true faith and love? Again I dare to speak in her name: she cannot! And this inability is what makes up her glory. This, by the way, is what makes heavenly protectors different from earthly ones—the earthly ones can protect, or they can not protect, even if the one asking for protection is worthy of it. But heavenly protectors cannot not protect the worthy: where there is sincere prayer, there is their help; where there is faith and love for them, there are they—this for them is a sacred necessity. Even less can the Mother of God ignore pure prayers, she cannot refuse to give speedy help, for as a special reward for her great and unsurpassed service for the salvation of mankind, she has been given the right as the first Intercessor for all those in need, the joy and protection of all the sorrowing.

What may produce this most treasured surety in the Mother of God’s protection over us? Carelessness over the work of our salvation? Fearlessness in violating the law of God? Putting off our repentance from day to day? No, brothers and sisters, this would be an abuse of heavenly mercy and an insult in the face of our most holy Protectress. The most pure of all Virgins cannot offer protection for sins; she only protects sinners, and only those who repent. Whoever wishes to be always under her grace-filled Protection must continually distance himself from every kind of sin; for every sin breaks our union with her. She prays for you on high, but you must pray for yourself here below; she protects you through her merits before her Son, but you must array yourself in merits through faith and love. Otherwise, if we give ourselves over to sin we will have the same problem as the Israelites had. Moses received the law from God on Mount Sinai, but they grew bored during his absence, forged the golden calf at the foot of the mountain, and starting bowing down to it and making mischief. Seeing this, the Lord immediately cut off His conversation with Moses and said, Go, get thee down; for thy people, which thou broughtest out of the land of Egypt, have corrupted themselves… Now therefore let me alone, that my wrath may wax hot against them, and that I may consume them (Ex. 32:7, 10). Won’t her Son and God, Whom it is meet to worship, say something similar to our most holy Intercessor if we, like the Israelites, give ourselves over to lawlessness? “You pray and intercede for them, and I am ready to show all mercy to those for whom I endured death. But look at what they are doing! While you pray, they are worshipping the golden calf, offering sacrifices to the idols of their passion and trampling upon my laws. Where is there room for mercy? They are bringing wrath upon themselves. They need a punishment to wake them up and bring them to their senses, and not mercy and consolation. Leave me be, and in My wrath I will consume them with the fire that they themselves have kindled.

Brothers and sisters, this example, which is both terrible and instructive, was before that same country of Greece in which the miraculous Protection of the Mother of God was manifested—which we commemorate today. What signs of special protection did she not show toward her people? How many times were the Scythes and Hagarenes defeated by the Victorious Leader beneath the walls of Constantinople? But when the Mother of God saw that her protection was not improving those she protected, that they needed not mercy but instructive punishment, she took her protection away from them. And three centuries of slavery to the Mohamedans, together with all its attendant forms of humiliation, were barely enough for Greece in order to regain the Mother of Gods’ Protection, which is now visibly beginning to spread over the Greek people.[1]

The same thing can happen to every soul that does not take care for its salvation in hope of the Mother of God’s intercession. God’s judgment is the same in both the small and the great: glory… honor, and peace to all who do good and to those who repent of their evil, but tribulation and anguish upon every soul of man that does evil, and remains in evil! (cf. Rom. 2:9–10).

Knowing this, let us run without any doubts to the protection of the Most Blessed Virgin; but let us not bring our sins to be covered by that protection, without first cleansing them away with the tears of our repentance. The Mother of God heals all infirmities, assuages all sorrows, and covers those very sins, just as soon as they are united with a heart that is broken over them. But she does not and cannot cover those hardened in their sins! Amen.

Homily on the Day of the Protection of the Mother of God
St. Nicholai Velimirovich

Homily on the Day of the Protection of the Mother of God
St. Nicholai Velimirovich
That the righteous inherit the Kingdom of God is witnessed by the Most Pure Mother of God through her appearance in glory and light, with her protecting veil, with which she protects from evil all who run to her with tears, prayer and faith. She appeared and she still appears—not just for the sake of appearing, but in order to open the spiritual eyes of those without faith, so that they would learn of eternal life in the Kingdom of Heaven. 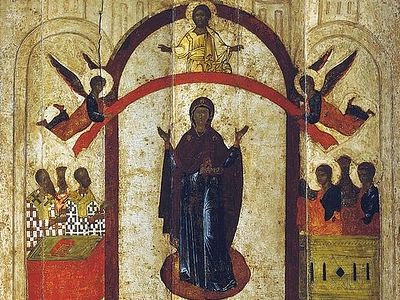 Rejoice, O Our Joy! Sermon on the Feast of the Protection of the Mother of God
Archimandrite John (Krestiankin)

Rejoice, O Our Joy! Sermon on the Feast of the Protection of the Mother of God
Archimandrite John (Krestiankin)
But during this present, difficult time, when the earth has grown old, is burdened by faithlessness, lawlessness, and ignorance of the knowledge of God’s commandments, has our Fervent Intercessor turned away from us in her zeal for the glory of her Son and God? No, my dears, this could not be. Needy children are dearer to a mother.

The Feast of the Protection of the Mother of God
From The Prologue From Ochrid by Bishop Nikolai Velimirovich
The Church has always glorified the Most Holy Mother of God as the Protectress and Defender of the Christian people, entreating, by her intercession, God's loving-kindness towards us sinners. The Mother of God's aid has been clearly shown times without number, both to individuals and to peoples, both in peace and in war, both in monastic deserts and in crowded cities.
Комментарии