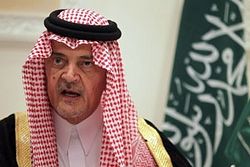 "Such policy, in the interpretation of Riyadh, is to pursue a dual object: on the one hand, to unite the enemies of Bashar Al-Assad, and on the other hand, to create a counterbalance to the supporters of al-Qaeda, whose influence is permanently increasing," says the article.

The formation that interests Riyadh is the "Army of Islam", created late in September on the basis of 43 Syrian groups. According to some assessments, it will number from 5,000 to 50,000 soldiers. It is expected that they will be provided with the best weapons including Portable Anti-Aircraft Rocket Systems and antitank guided missiles.

In the view of the president of the Russian Institute of Religion and Politics Alexander Ignatenko, the Syrian crisis from the very beginning has been conditioned by persistent intervention of two Arabian monarchies—Qatar and Saudi Arabia.

With their active participation, such anti-regime sub-units as the Free Syrian Army were formed, on which Doha and Riyadh spent no less than 15 billion dollars, as well as Jabhat Al-Nusra and The Islamic State of Iraq and the Levant, both being subdivisions of al-Qaeda.

Militants burn down Church in a frontier town Tel Abyad in Syria The arson of the church was preceded by an act of vandalism: the extremist had stolen precious vessels, while crosses and icons had been cut into pieces and broken down.

Mass grave found in freed Christian village in Syria After the operation that liberated the Christian village of Sadad from the Giish and Jabhat al-Nusra militants, local residents discovered two mass graves that contained about 30 bodies of men, women and children, killed at the hands of the extremists around October 26–28 this year.
Комментарии
Войдите через FaceBook ВКонтакте Яндекс Mail.Ru Google или введите свои данные: