Timur’s armies ravaged Kartli, then took the king, queen, and the entire royal court captive and sent them to Karabakh (in present-day Azerbaijan). Later Timur attempted to entice King Bagrat to renounce the Christian Faith in exchange for permission to return to the throne and for the release of the other Georgian prisoners.

For some time Timur was unable to subjugate King Bagrat, but in the end, being powerless and isolated from his kinsmen, the king began to falter. He devised a sly scheme: to confess Islam before the enemy, but to remain a Christian at heart. Satisfied with King Bagrat’s decision to “convert to Islam,” Timur permitted the king to return to the throne of Kartli. At the request of King Bagrat, Timur sent twelve thousand troops with him to complete Georgia’s forcible conversion to Islam.

When they were approaching the village of Khunani in southeastern Georgia, Bagrat secretly informed his son Giorgi of everything that had happened and called upon him and his army to massacre the invaders.

The news of Bagrat’s betrayal and the ruin of his army infuriated Timur, and he called for immediate revenge. At their leader’s command, his followers destroyed everything in their path, set fire to cities and villages, devastated churches, and thus forced their way through to Kvabtakhevi Monastery.

Monastics and laymen alike were gathered in Kvabtakhevi when the enemy came thundering in. Having forced open the gate, the attackers burst into the monastery, then plundered and seized all its treasures. They captured the young and strong, carrying them away.

The old and infirm were put to the sword. As the greatest humiliation, they mocked the clergy and monastics by strapping them with sleigh bells and jumping and dancing around them.

Already drunk on the blood they had shed, the barbarians posed an ultimatum to those who remained: to renounce Christ and live or to be driven into the church and burned alive.

Faced with these terms, the faithful cried out: “Go ahead and burn our flesh—in the Heavenly Kingdom our souls will burn with a divine flame more radiant than the sun!” And in their exceeding humility, the martyrs requested that their martyrdom not be put on display:

“We ask only that you not commit this sin before the eyes of men and angels. The Lord alone knows the sincerity of our will and comforts us in our righteous afflictions!”

Having been driven like beasts into the church, the martyrs raised up a final prayer to God: “In the multitude of Thy mercy shall I go into Thy house; I shall worship toward Thy holy temple in fear of Thee. O Lord, guide me in the way of Thy righteousness; because of mine enemies, make straight my way before Thee (Ps. 5:6–7) that with a pure mind I may glorify Thee forever….”

The executioners hauled in more and more wood, until the flames enveloping the church blazed as high as the heavens and the echo of crackling timber resounded through the mountains. Ensnared in a ring of fire, the blissful martyrs chanted psalms as they gave up their spirits to the Lord.

The massacre at Kvabtakhevi took place in 1386. The imprints of the martyrs’ charred bodies remain on the floor of the church to this day.

Defenders of our good deeds and ready help of those who call upon you, O Holy Martyrs of Kvabtakhevi Monastery, intercede with Christ God to have mercy on our souls! 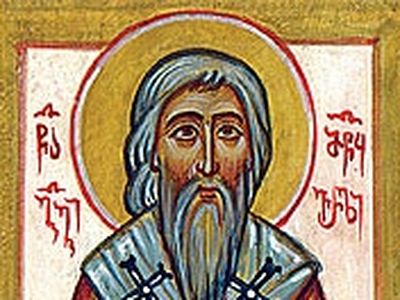 Saint Giorgi of Atsquri (9th–10th centuries)
Archpriest Zakaria Machitadze
Few biographical details about St. Giorgi of Atsquri have been preserved in the writings of the famous 10th-century Georgian hagiographers Giorgi Merchule and Basil of Zarzma. 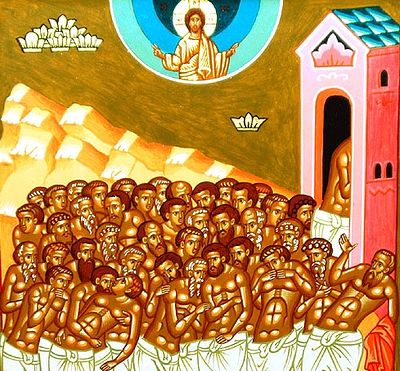 40 Holy Martyrs of Sebaste
On the following morning, the soldiers were again taken to Agricola. This time the pagan tried flattery. He began to praise their valor, their youth and strength, and once more he urged them to renounce Christ and thereby win themselves the respect and favor of their emperor. 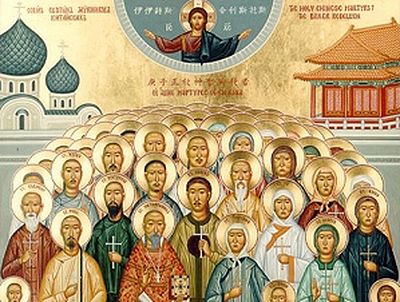 A Church Built on the Blood of Martyrs
Fr. Dionysy Pozdnayev

A Church Built on the Blood of Martyrs
Fr. Dionysy Pozdnayev
On the eve, there were already proclamations pasted along the streets calling the pagans to kill the Christians, and threatening with death anyone who dared to hide them. During the night, the boxers appeared with burning torches in all parts of Peking, attacking Christian homes, grabbing the misfortunate Christians and torturing them, trying the force them to renounce Christ. 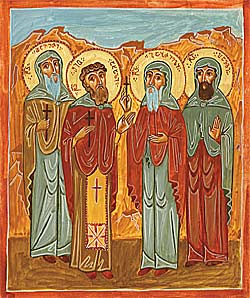