Miracles of the Shuya-Smolensk Icon of the Mother of God 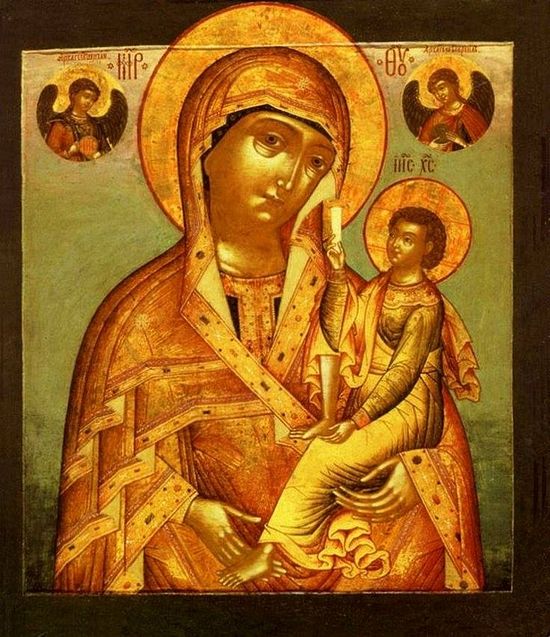 On November 2/15 is celebrated the deliverance of the town of Shuya, Ivanovo Province, Russia from the plague of 1654, and the discovery of the miraculous icon of the Mother of God which came to be named the Shuya-Smolensk icon

The Shuya priest Evlampy Pravdin translated from an old manuscript and published the “Story of the miracles that came from the Shuya-Smolensk icon of the Mother of God.” On this important day for Shuya, November 15, in the Cathedral of the Resurrection of Christ, a festal Liturgy is served followed by a cross procession.

The parishioners of the Resurrection Church asked iconographer Gerasim Tikhonov Ikonikov to paint a “Smolensk” Hodigitria icon “with all reverence and haste”. The iconographer happily took up the work, praying to the Most Pure Theotokos for its successful completion.

The icon was painted in a week, throughout which the priest and all the parishioners served daily in the church, sang molebens, “kept vigil, fasted, and prayed.” Seeing the death toll rise from day to day, all were preparing for death, repenting in confession to their spiritual fathers and receiving the Holy Mysteries of Christ.

During the iconographer’s work on the icon the first miraculous event occurred. On the day after he had worked the “sketch” on the board, he discovered that the placement of the Divine Infant in the hands of the Mother of God had significantly changed from that of the original Smolensk icon. He corrected the sketch, but on the third day he discovered that it had changed back to what he had found at first. He did not dare to change it after that, seeing in these changes not an accident but the special Providence of God.

After a week, when the icon was finished, all the clergy vested, with candles and censors and accompanied by all the people came to the house of the iconographer, received the newly-painted icon, and processed back to the Resurrection Church. When the icon was placed in the spot prepared for it, the entire church was lit by an unusually bright light radiating from the icon. Seeing this and feeling in their souls the action of divine grace, all the people present were filled with great spiritual joy and rejoicing. “After this,” the “Story” goes on, “the people began bringing silver to adorn the icon, placing all their hope in God and His Most Pure Mother.”

But the deadly plague did not cease immediately after this first miracle. To the contrary, the sickness raged even more violently than before, so that “there was great fear, terror, and sorrow.” The people turned with even more fervent prayer to God and the Mother of God, whole families with women and children coming to church for every divine service, and soon their prayers were answered. People stopped dying from the disease, and all those who lay on their deathbeds were suddenly healed, although they had lost hope because the disease was incurable.

The iconographer Gerasim Ikonikov himself, however, along with his entire family and brothers were numbered among those dead of the plague. All five members of his family received the tonsure into the great angelic schema, confessed, received Holy Communion, and then reposed in the Lord. The people all saw in this blessed Christian repose of the iconographer and his entire household a sign of the Theotokos’s great mercy and good will.

The epidemic ceased first in the parish of the Resurrection church, and then in the whole town. Nearly half the town’s population had been carried away—560 out of 1170 people died, and out of 211 households, ninety lost every inhabitant.

Eleven years after this event, on Monday of Bright Week in the year 1666, a new miracle occurred from the Shuya icon: the healing of the possessed boy Yakov. Between April 16, 1666 to October 7, 1667, eighty-five miraculous healings took place from the icon, and by the year 1800 there were 109 miracles recorded. The majority of these were healings of total or partial blindness and eye disease, comprising thirty-six instances, as well as of various emotional and mental illnesses, including thirty-two healings from demonic possession and spells.

There were also healings of diseases of the legs (twelve cases), six healings of afflictions of the head, three of deafness, and one healing each of the spine and a toothache. Most of the healings occurred during the celebration of the Smolensk icon on July 28, 1666, when there were sixteen healings, and on the next day, July 29, there were eighteen healings.

In 1666 the priests of Shuya signed a document from the townspeople to Tsar Alexei Mikhailovich reporting the miracles occurring from the newly-painted icon.

In 1667, Patriarch Joasaph issued a charter at the request of Tsar Alexei Mikhailovich and resolution by the Holy Synod appointing Archbishop Stephan of Suzdal and Torussk to go to Shuya for verification of these miracles from the Smolensk Mother of God.

Archbishop Stephan along with six abbots of well-known monasteries and other clergy arrived in Shuya on the eve of July 28, before the feast day of the Smolensk icon. All those who came served an All-Night Vigil, and on the feast day served a solemn Divine Liturgy and moleben. Afterwards, they took down written testimony from the cathedral clergy, priests Alexei and Gregory, and their parishioners confirming the truth of these healings. All the testimony was written in a special book and signed personally, then taken to Moscow along with Archbishop Stephan’s report on the fulfillment of his mission.

Because of these events, the icon was glorified by the Church and given the name, “Smolensk-Shuya”, and its own feast outside of the day of the Smolensk icon was set on November 2/15, in memory of the time when the town of Shuya was miraculously saved from the deadly plague. At that time, the Resurrection Church became a cathedral.

Compiled from texts of the St. Nicholas Shartomsky Monstery by the site [Russian], Moscow the Third Rome. 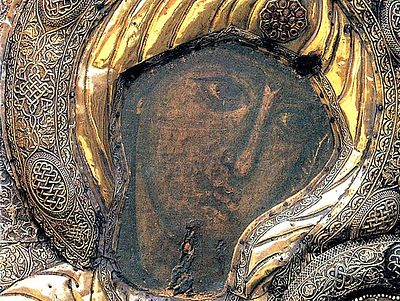 The Feast of the Iveron Icon of the Mother of God, and the Veneration of Holy Icons
Hieromonk Irenei (Pikovsky) 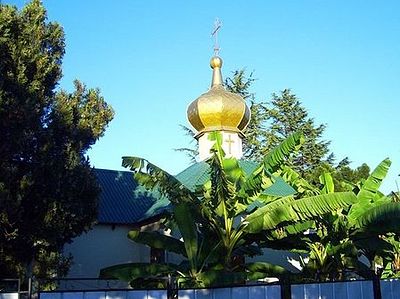 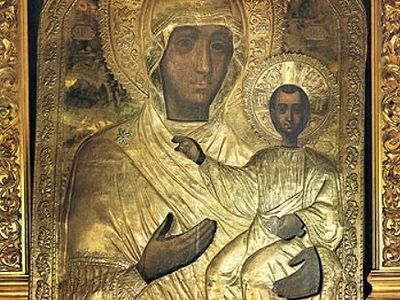 Appearance of the Icon of the Mother of God "the Smolensk Directress" from Constantinople
The Smolensk "Hodigitria" Icon of the Theotokos, or "She who leads the way," was, according to Church Tradition, painted by the holy Evangelist Luke during the earthly life of the Most Holy Theotokos. Holy Hierarch Demetrius of Rostov suggests that this icon was written at the request of Theophilus, the prefect of Antioch. 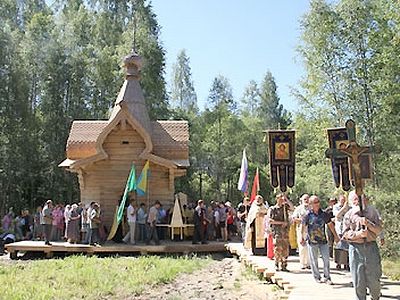 Smolensk–Kiev Cross Procession Opened
On June 29, in the village of Dudkino, Sychevo region, the Slavic youth religious procession was ceremoniously opened. The young people will process from Smolensk to Kiev, reports the official Smolensk and Vyazma diocesan website.
Комментарии