Look down from heaven and behold… 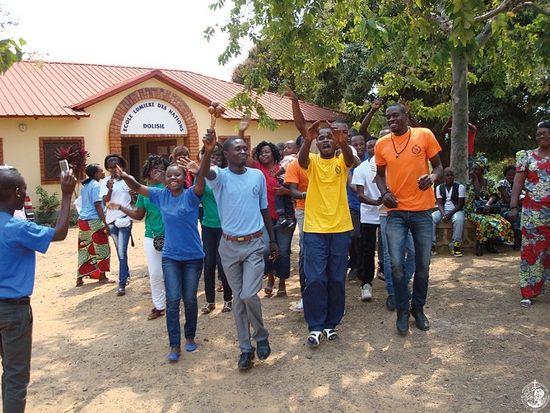 On October 26, the Church of Christ celebrated the memory of the holy and glorious Great Martyr Demetrius the Myrrh-gusher, which is also the feast of our diocesan cathedral. What does this celebration mean for the local Church of the Congo?

From the early years of Christianity, the holy See of the bishop was that place in which the sacred church where the spiritual shepherd officiated was located. Alongside this there has always been the holy baptistery, indicating an unbroken unity between the place where the Eucharist was celebrated by the bishop and the celebration of the sacrament of Baptism. Then only he had the right to perform baptism as a guarantor of good faith, which is why the baptistery was always located in the See: the bishop was witness to the unity of the Church, in charge of this sacred and unshakeable duty. He walked, taught and lit the darkness of heresy, namely the removal, decomposition and fragmentation of the seamless tunic of Christ, a work of the devil himself. Once, a monk, using an expression of old times said that the sakkos (dalmatic) carries bells to "scare the heretics away."

Look down from heaven, oh Lord: here, in Central Africa, Congo-Brazzaville, we are experiencing the same truths that the Church has lived since the Redeemer spilled His blood. Indeed, this place experiences early Christian times! We work in a land that was once scraping along – is it still? – in search of a "god" who works within the frames of a grim compatibility, a give and take relationship. The greatest difficulty in spreading the Gospel lies in the teaching of the Word that gives priority to the freedom and sacred uniqueness of the person. This is so because our African brothers, like the gentiles of the time, coexisted - and perhaps they partly coexist - with a religiosity blended with superstition and through it with slavery. Our brothers undergo an involuntary martyrdom every day in the places they serve, as well as thousands of other practices that seem to be incomprehensible to us; after all, we ourselves, despite having been Christianized centuries ago, have, indeed, compromised with our own attitudes, whether these are right or not.

We come to this land in order to speak to our brothers about Jesus Christ, the One and Only Truth, which affects slavery. Unfortunately, a deep-rooted feeling of fear creeps into their collective unconscious. Fear dating back to older times, a fear of the leader, the magician, the exorcist, the strong warriors, the strictly graded racial hierarchy, the settler-oppressor. A fear which depended primarily on the provision of food and grew through the systematic concealment of education and knowledge. Before the arrival of the colonizers at the richest continent in the world, Africa, when traditional structures and values were being monopolized, it was these groups managing the land, water and food, there was collective education, racial awareness and tribal knowledge, while religiosity, wherever it turned within the darkness of superstition, was part of their existence. Then came the westerners, who along with the other ills, stretched over a Christianity "enriched" with their ruthless pursuits, clerically developed, based on divine wrath which always lurks ...

And then it was our turn. We came here, materially poor but spiritually rich by preserving the unfaked, genuine character of the holy Gospel, listening to the voice of the indigenous people. That is how Orthodoxy reached these places. We live experiences dating back to apostolic times in places where fear is the sole ruler.

The hymns sung on St. Demetrius' feast day evoke precisely this absence of fear that the martyr of Christ had. His answers to the questions in the court of the compromised. The judges of the martyrs, lovers of absolute nothing. Those who condemned, persecuted, killed Christians are no longer remembered. Oblivion has swallowed them, since their memory and heart refused to see the Truth. By contrast, on his feast day from the cloud of martyrs emerges the young Great Martyr Demetrius: "Martyr of Christ, come forth," sung in French, and the Martyr of Christ can hear our call. For us, the Orthodox Christians in Congo-Brazzaville, the altar of the Cathedral became the plate of his tomb -like the early Christian Holy Altars - which was shed with myrrh, fruit of the grace of his martyrdom. And it is over this tomb that the Bishop of the local Church officiates, confessing the unity of Faith with heavenly Orthodoxy. 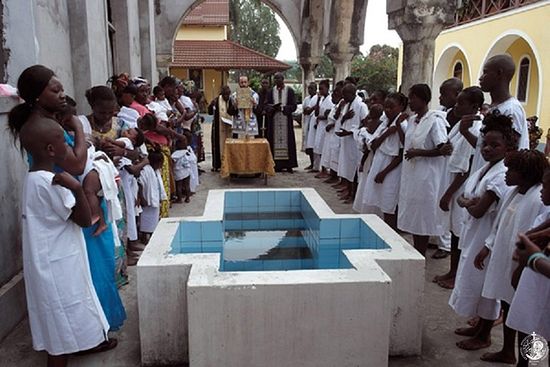 In places where dissonance prevails, which in any way infringes on the intellectual freedom of our brothers living here, with profound religious, social and cultural roots, comes the holy candle of Orthodoxy in order to shine and take away the fear of death. Everyone’s ultimate fear is death and the defeat of fears is magnified in the Resurrection of Christ. A Resurrection experienced by the enlightened children of His Church, joined in its Body. Without this unity, the Church is not accounted as the Church. A Church that was shed with the blood of Christ, of the martyrs, of Demetrius the myrrh-gusher, the Saint from Thessalonica that advocates for peace and unity in the distance from the place of his martyrdom, the Church of the African equator, which has recourse to him as its protector and intercessor to the Triune God.

It is this Church, oh Lord, that we ask you to “look down from heaven and see.” "Visit the newly-sprung vineyard. Protect your children, who now know Your road to walk properly. Safeguard the unity of the Church through the link of faith and peace. Enlighten people so that they can understand that love for Your Church primarily means love for its unity. Grant spiritual strength to Your new children, our Church, and "take care of it, which Thy right hand hath planted."

Bishop Panteleimon of Brazzaville and Gabon
edited by OrthoChristian.com 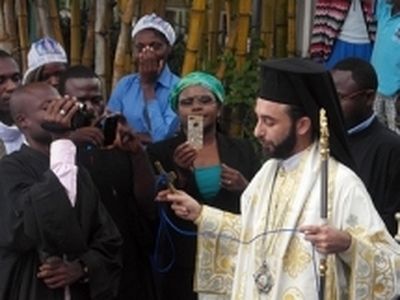 The Blessing of the Waters in Congo River

The Blessing of the Waters in Congo River The Great Feast of Theophany was celebrated with piety and holiness in the Holy Diocese of Congo-Brazzaville and Gabon. 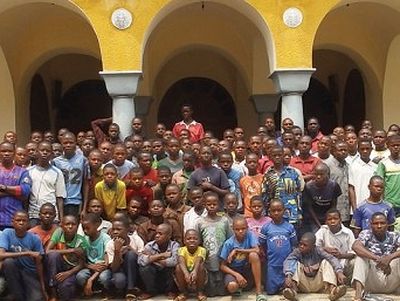 Responsibility Tour to the far ends of the Congo

Responsibility Tour to the far ends of the Congo These people have no priest, no church. They rent a classroom in a school where they gather every Sunday in order to chant and read the New Testament. They have zeal of God and a fervent desire to be baptized and have a priest, a sacred church, a school. 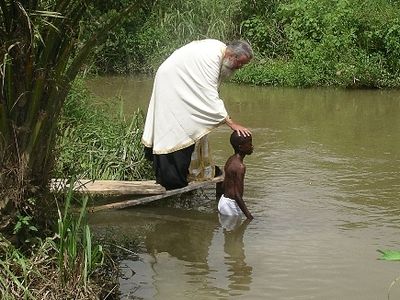 “Each of us must become an apostle.” A talk with Archimandrite Theologos (Chrysantakopoulos), a missionary to the Congo Svetlana Khmeleva

“Each of us must become an apostle.” A talk with Archimandrite Theologos (Chrysantakopoulos), a missionary to the Congo Svetlana Khmeleva A missionary should first of all witness the good tidings of the gospel as it has been preserved by the Orthodox Church over the centuries—without change, without additions, without omissions. We have to look at our brothers (and we are all brothers, children of the one God, be we baptized or not) as at an icon, the image of God. We must respect the traditions by which people live, apply what is best of them. If tradition contradicts the spirit of Christianity, we have to explain this to people with love, without offending them.
Комментарии