Bulgaria's First Christmas Tree Dates Back to 1879, A Year After Its National Liberation From the Ottoman Empire 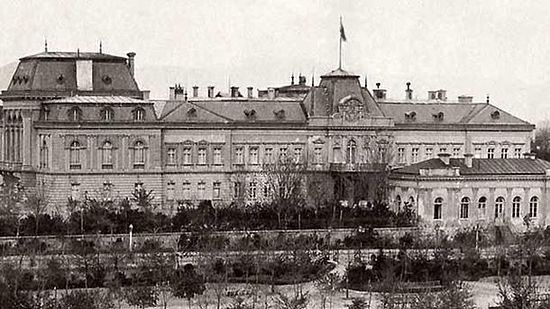 The Royal Palace in Sofia (photo from the beginning of the 20th century) is where Bulgaria’s first public celebration of Christmas with a Christmas tree took place in 1889. Photo: Bulgarian National Radio

Bulgaria’s first ever Christmas tree to appear in a private home dates back to 1879, just a year after it was liberated from the Ottoman Turkish Empire, whereas the first featuring of a Christmas tree in a celebration at a public institution goes back to 1889.

The first Christmas tree in Bulgaria was decorated by Stefan Stambolov (1854-1894), a Bulgarian freedom fighter andrebel leader against the Ottoman Empire, and one of the most important politicians and state leaders during the early years of the Third Bulgarian Tsardom (1878-1944).

Stambolov decorated the first ever Christmas tree in Bulgaria in 1879 at a private reception he held in Sofia, explains Todorka Nedeva, a curator at the Modern History Section of the Regional Museum of History in the city of Veliko Tarnovo in Central North Bulgaria, as cited by Radio Focus Veliko Tarnovo.

Bulgaria’s first Christmas tree was decorated with garlands, glass balls, and shiny toys. After the reception ended, each of the guests took home one of the decorative toys from the tree as a token of memory from the event.

Stefan Stambolov is known for his leading roles in the Bulgarian Revolutionary Central Committee against the Ottoman Empire, the organization of the Stara Zagora Uprising in 1875, and the April Uprising in 1876.

After Bulgaria’s National Liberation from Ottoman Turkey as a result of the Russian-Turkish War of 1877-1878, Stambolov served as a member of the Bulgarian Founding Assembly, and as Vice Speaker, and then Speaker of theBulgarian Parliament. In 1886, he led a counter-coup against a Russian-controlled coup that deposed the first ruler of the Third Bulgarian Tsardom, Knyaz (King) Alexander I Batenberg, and then served as a regent for the missing monarch.

In 1887-1894, he served as Bulgaria’s Prime Minister. He became known for his successful efforts to fend off the encroachments of the Russian Empire and its attempts to subjugate the newly liberated Bulgaria, and his diplomatic prowess earning him the nickname “the Bulgarian Bismarck” (after the then German Chancellor, Otto von Bismarck). In domestic politics, however,Stambolov’s rule was seen as autocratic earning him numerous enemies. He was brutally assassinated in Sofia in 1894, shortly after resigning from the government.

The first time a Christmas tree was used in an official Christmascelebration by a Bulgarian state institution was in 1889 under the auspices of Knyaginya (Princess) Clementine of Orleans(1817-1907), the mother of Tsar Ferdinand I (r. 1887-1918).

The huge Christmas tree was part of a lavish Christmas celebration at the Bulgarian Royal Palace, and was decorated by students from the schools in Sofia.

“During the entire day, the children were so overawed by the tree that they didn’t make a sound,” Nedeva explains.

She mentions the curious case of one of the kids involved in this first public Christmas tree celebration in Bulgaria, Alexander Bozhinov, who later became one of Bulgaria’s greatest political cartoonists.

Bozhinov is known to have been 20 minutes late for the celebration at the Royal Palace, and as a result did not receive a present like the rest of the schoolchildren.

Some historians believe this Christmas mishap may have had something to do with the numerous political cartoonsof the Bulgarian Tsar and the royal family that Bozhinov produced later in his life.

Despite the first examples of decorated Christmas trees introduced by Stefan Stambolov and Princess Clementine,the novelty did not catch on immediately among the Bulgarian public.

Nedeva notes that in the northern city of Veliko Tarnovo the celebrations of Christmas with Christmas trees became a mass practice only in the 1920s.

Later imported decorations and toys made colorful glass became available in stores and markets in Bulgaria in the1930s but were very expensive, and could cost up to a third of a month’s income. 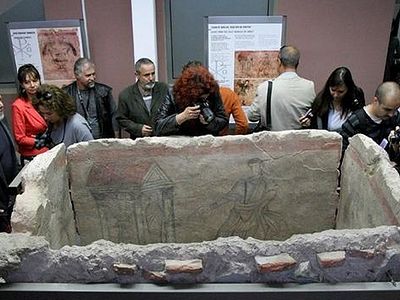 Archaeology Museum in Bulgaria's Plovdiv Shows for the First Time Newly Restored Early Christian Tomb With Murals of Jesus Christ's Miracles A 4th century AD Early Christian Roman tomb with stunning biblical murals depicting the miracles of Jesus Christ, which was found by accident in the southern Bulgarian city of Plovdiv in 2012, has now been restored and shown to the public for the first time. 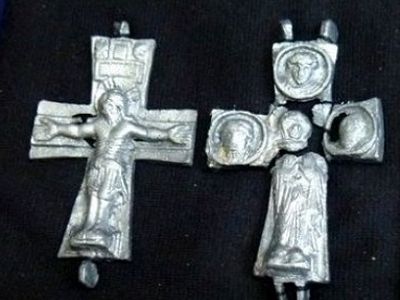 Bulgarian Archaeologists Show Lead Cross Reliquary, Lead Icon Found In Medieval City Missionis (KRUM’S Fortress) A lead cross, which is also a reliquary, found during the excavations of the Early Byzantine andmedieval Bulgarian city of Missionis, also known as Krum’s Fortress, whose ruins are located near today’s northeastern city of Targovishte, has been presented to the public for the first time byBulgarian archaeologists. 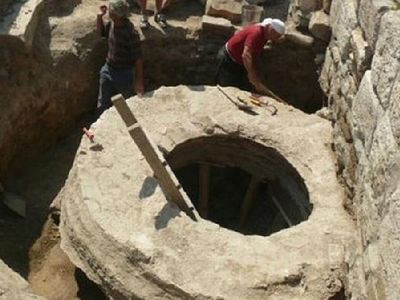