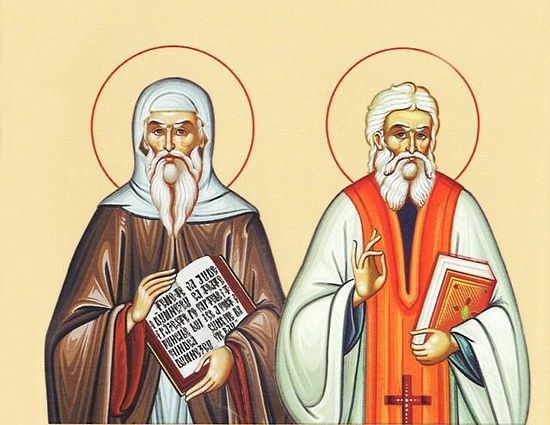 Venerable Simeon was born at the beginning of the fifteenth century in a village close to Piatra Neamţ city, at the time of the pious ruler Prince Alexander the Kind (1400-1432). From his youth he was a very religious man, choosing to live the monastic life and joining the community of Bistriţa Monastery. After much ascetic practice and obedience, in 1432 he retired together with two of his disciples on the left bank of Pângăraţi creek. There he built a cell of fir beams in a beautiful meadow where he stayed together with his disciples in permanent prayer, so that his place became known as “Simeon’s Hermitage.” Having heard of him, Right-believing Prince Stephan the Great (1457–1504) helped him raise a small wooden church dedicated to Great Martyr St. Demetrius the Myrrh-Gusher. When Metropolitan Teoctist I consecrated it, Venerable Simeon was ordained priest, becoming the founder and igumen of Pângăraţi Monastery, called “Simeon’s Skete” until 1508. There he gathered many disciples around him, growing in self-denial and prayer and receiving the gifts of healing and of prophecy. The faithful benefited from his blessings, as well as high officials, and even Right-believing Prince Stephan the Great, who used to ask for his advice for him and for the country.

In 1476, when the Turks invaded Moldavia and won the battle of Războieni, Venerable Simeon prayed for the country and for the ruling prince to rid them of the invaders, and took his disciples to settle at Caşva Monastery, in Mureş region. There he passed away the same year in the autumn, being buried in that monastery. Towards the end of 1484, when peace was reigning again in the country, Right-believing Prince Stephan the Great placed his relics in a shrine and kept them in his treasury, in great honor. Then he took parts of the relics and placed them in a shrine for veneration, burying the rest of them in the Citadel of Suceava.

On March 6, 2008 the Holy Synod of the Romanian Orthodox Church canonized Venerable Simeon and Amphilochius, to be celebrated on September 7/20.

Through the prayers of the venerable Saints Simeon and Amphilochius, Lord Jesus Christ our God have mercy on us. Amen.

Oh, Venerable Fathers Simeon and Amphilochius, you who did enlighten the Carpathian woods through your prayers and filled the whole valley of Bistrița with a spiritual aroma, close advisers of the ruling princes and radiant torches of the monastics and pious faithful, pray to God for us, who celebrate with love your holy commemoration.