The Verkhovna Rada (the Ukrainian Parliament) has appealed to democratic countries with a request to recognize the Holodomor [a man-made mass famine—O.C.] of 1932-1933 in Ukraine as a genocide of the Ukrainian people.

The relevant document at the second reading and at the plenary meeting in general was endorsed Wednesday by 233 people’s deputies, reports Interfax.

“In 1932-1933 Ukraine went through the terrible tragedy of the Holodomor which claimed millions of human lives. Through its forcible confiscation of food, its blockade of villages and whole districts, prohibition on leaving Ukraine which was hit by the famine, curtailing of rural trade, its repressions against dissidents, the criminal totalitarian Communist regime deliberately established such living conditions for Ukrainians as were meant for the people’s physical extermination. This policy of the regime was an outrage against humanity, in accordance with the UN Convention on the Prevention and Punishment of the Crime of Genocide of December 9, 1948,” reads the Verkhovna Rada’s message.

It should be noted that the Ukrainian Parliament earlier recognized the Holodomor of 1932-1933 as a crime of genocide against the Ukrainian people, and the Law of Ukraine “On the Condemnation of the Communist and National Socialist (Nazi) Totalitarian Regimes in Ukraine and the Prohibition of Their Symbols” of June 9, 2015 condemned the Communist totalitarian regime as criminal.

According to a study made by the N.V. Ptukha Institute of Demography and Social Research of the National Academy of Sciences (NAS) of Ukraine, Ukraine’s total loss as a result of supermortality in the 1932-1933 famine was about four million people, and the decline in birth rate was 600,000. The estimated loss from supermortality in all the republics of the USSR was 8,731,000 people (Russia – 3,265,000 people, Kazakhstan – 1,258,000 people), the historians report. 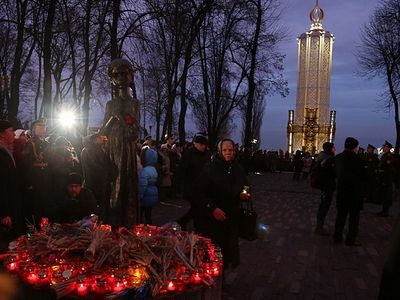 Victims of Holodomor prayerfully commemorated with minute of silence, lit candles in Kiev

Victims of Holodomor prayerfully commemorated with minute of silence, lit candles in Kiev
The president announced a nationwide minute of silence and the “Light a Candle” demonstration. In closing, those gathered laid flowers at the memorial and placed lit candles.
Комментарии

Editor 9 декабря 2016, 10:00
Far from denying the genocide, you can see that as editors we even inserted into the text the explanation that the Holodmor is a "man-made mass famine," which the article goes on to attribute to the Communist regime, resulting in the death of millions. In the "See also" section you can also find a link to another article about the Holodmor being prayerfully commemorated. Thank you for reading.

Vasil 8 декабря 2016, 21:00
I thought this website was supposed to speak about Orthodox Christian it, not spread Moscovite propaganda? Also, please correct your spelling on the capital city of Ukraine. It is spelled Kyiv, not Kiev. You do not see Ukrainian news sources misspelling your capital city. Stick to Orthodox news in the future and quit trying to deny the facts of Soviet Russian genocide against Ukraine.