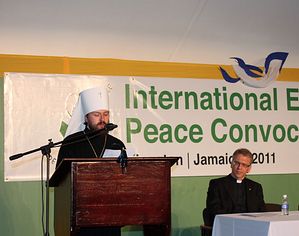 Metropolitan Hilarion of Volokolamsk, head of the Moscow Patriarchate’s department for external church relations, spoke at the opening of the International Ecumenical Peace Convocation on May 18, 2011, in Kingston, the capital of Jamaica. The Moscow Patriarchate delegation led by Metropolitan Hilarion takes part in the work of the IEPC in accordance with the Russian Orthodox Church’s Holy Synod’s decision of July 26. 2010.

The welcoming speeches were made by Jamaica’s Prime Minister Bruce Golding, the Caribbean Conference of Church’s general secretary Gerard Granado and Jamaica Council of Churches president Paul Gardner. A message of greetings was brought by Ms Ofelia Ortega, a president of the World Council of Churches.

Then the convocation was addressed by Metropolitan Hilarion. He devoted his address to an analysis of the forms and scales taken by violence in today’s world. According to the metropolitan, the most important problem facing Christians today can be formulated as follows: What can we do together in face of the threat of escalation of violence, aggressiveness, exploitation and terrorism?

The leader of the Russian Church’s delegation noted with regret that double standards become ever more manifest in today’s world as ‘the peace-loving rhetoric’ is activated on the level of governments and international organizations, on one hand, and violence is propagated in everyday life especially through television, cinema and the mass media, on the other.

‘The commercial advantage of the distribution of such video products is so great that it makes it quite possible to shut eyes on the glaring contradiction between official rhetoric and what we see on TV screens every day. The modern pluralistic society seems unable to give the right assessment to the disastrous consequences of this discrepancy between word and deed since by definition it gives room to any evil disguised normally under such notion as ‘freedom of choice’, ‘freedom of speech’, freedom of expression’ and ‘individual freedom’, he said.

More often than not, he continued, Christian Churches today tend to speak out on concrete manifestations of violence without addressing the root of the problem. To be ‘a prophetic voice’ in the world, not only the voice crying in the wilderness, Christians ought ‘to fearlessly expose the injustices of the modern society without fear of tarnishing their reputation in the eyes of the powers that be and the mass media under their control’.

At the same time, he said, we can speak today of a positive tendency in assessing the situation with regard to violence in the contemporary world. If until recently the tendency was to speak of ‘an abstract infringement on religious freedom with regard to particular minorities’, now at last there are voices arising in defence of persecuted Christians who are subjected to persecution for their faith in quite a number of regions in the world, in particular, in Muslim countries.

Metropolitan Hilarion believes the resolution adopted by the European Parliament early this year to be an important landmark on the way to acknowledging the fact of persecution against Christians. ‘In its wake the Italian Parliament’s House of Representatives adopted a similar resolution obliging authorities to oppose attempts to subject Christians to discrimination’, he noted.

Regrettably, in most cases Christians have proved extremely passive in the defence of their persecuted brothers and sisters in faith, Metropolitan Hilarion continued. ‘More often than not we do not go beyond statements, press releases, condolences and politically correct ‘expression of concern’. The hour has come to move to effective actions. We urgently need to organize a system of protecting Christians against persecution. In the first place, it is necessary to set up information structures to monitor crimes committed on the grounds of religious hatred. The Christian community for all its disunity should unite and request the UN, governmental and international organizations to put an end to the persecution against Christians in today’s world’, he urged.

‘Christian Churches and communities should put real content in their peace and human rights work, taking care in the first place of their brothers and sisters subjected to persecution in some parts of the world. St. Paul calls us: As we have opportunity, let us do good to all people, especially to those who belong to the family of believers (Gal. 6:10); otherwise we will simply turn into one of hundreds of unobtrusive social institutions for promoting the building of peace’ he insisted.

In conclusion of his address, the leader of the Moscow Patriarchate delegation to the International Ecumenical Peace Convocation, speaking on behalf of the Russian Orthodox Church, called upon ‘both the powers that be and ordinary people of good will to show effective solidarity with persecuted Christians’.

‘The future of mankind should be built on peace and justice commanded by God, otherwise mankind has no future’, he concluded.