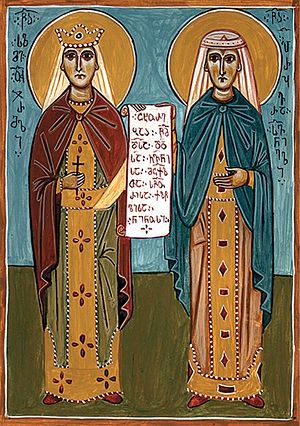 Saints Salome of Ujarma and Perozhavra of Sivnia were the helpers and closest companions of Saint Nino, Enlightener of Georgia. Saint Nino herself had converted them to the Christian Faith.

Salome was the wife of Revi, the son of King Mirian, and Perozhavra was married to the ruler of the Kartli region. Both women were queens, but they succeeded in serving Saint Nino while retaining their imperial roles. Saint Nino taught them to pray, and the women fasted regularly and performed good works. As a result of their influential social status, the two queens were able to help Saint Nino tremendously in spreading the Christian Faith.

After the conversion of Kartli, with inspiration from Saint Nino and by the order of King Mirian, Saint Salome erected a cross in Ujarma in the Kakheti region.

When Saint Nino fell ill in the village of Bodbe, the queens Salome and Perozhavra stood by her bed and wept bitterly at having to part with their beloved teacher and healer. They entreated Saint Nino, who was finishing her last hours on this earth, saying, “Tell us, our Queen, how did you come to our country to free our souls, and where were you raised? Tell us how to continue your good works. You who have delivered us from bondage to the enemy, tell us, what shall we do?”

From the information that Saint Nino then related to them, Saints Salome and Perozhavra wrote The Life of Saint Nino, Enlightener of Georgia. The Apostolic Orthodox Church of Georgia commemorates them on January 15, the day following the commemoration of Saint Nino.