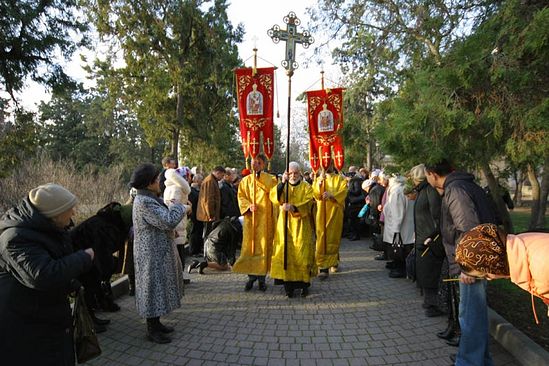 From February 14 to June 3 the all-Ukrainian Cross procession with a particle of the Holy and Life-giving Cross of the Lord and relics of Saints Constantine and Helen, Equals-to-the-Apostles, has been passing through towns of the Ukraine. The prayer procession is devoted to the 1700th anniversary of promulgation of the edict of Milan by Emperor Constantine and will be visiting 51 Ukrainian towns.

It will also be possible to venerate these relics in both the Pochaev and Svyatogor Lavras. The Cross procession will end in Kiev on the day when the Church celebrates the memory of Saints Constantine and Helen, Equals-to-the-Apostles.

Relics were met in Sevastopol on February 14, near the St. Vladimir's Cathedral in Cherson. The Clergy and laity walked from the monument of the Holy Apostle Andrew the First-called to the Cathedral, after which the Divine Liturgy was served in the upper Church, according to the website of the Sevastopol deanery.