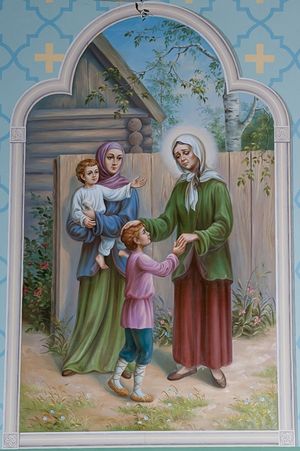 St. Petersburg in the late eighteenth century may not have been so noisy and populous as it is today, but even in those times it could hardly have been called a quiet island of saving peace. In Russia there were still quite a few uninhabited and solitary places, which drew self-sacrificing laborers to the saving field of peaceful service to God. It would seem that these would be the places of choice for those who sincerely wished to dedicate their lives to the Creator.

All the more does the image of blessed Xenia appear strange against the background of the capital’s bustle and vanity. This seems to have been forgotten by the woman living in the noisy streets of a large city, determined to live her life only according to the Gospel commandments, regardless of all human opinion. Dressed in men’s clothing, calling herself by the name of her dead husband, Andrei Feodorovich— could the blessed one really expect understanding and sympathy from those around her? Or, perhaps she intentionally wished to increase her podvig [ascetic labor] through her endurance of humiliation from others? If so, then everything went right according to plan from the very beginning. In summer and winter, in cold and heat the saint wandered for entire days around St. Petersburg; and evil people, especially street urchins, often mocked and laughed at her. However, people around her soon began to notice that in her words and actions there was profound hidden meaning. And when the blessed one began to be respected as a clairvoyant, no sooner would she appear on the streets and markets of the city than everyone who knew her would offer her their services. Regardless of season or weather, every single night blessed Xenia would go to the field and pray until dawn. Here, in her words, God’s presence was “more distinct”. This is even more perplexing—why would the saint return to the capital? Why didn’t she remain continually in the place where it was so good for her to abide with God?

Of course, the answer to this question lies along the borderline of rational forms. It is hard to fathom it through reason alone. However, the Christian heart differs from the unbelieving heart precisely in the fact that it does not reject truths that cannot be fathomed by reason. And this recognition of the strength of the soul capable of acting contrary to reason brings us closer to understanding the saint’s podvig. But that is not all.

In the image of St. Xenia everyone can find something familiar and close. It seems that there are no barriers between the saint and the soul of any person—no misunderstandings, or difference of opinions. Just say a word, awaken a feeling in the heart, and you will immediately be heard, understood, consoled…

Where do such strength, boldness, and love come from?

In Holy Scripture there are these remarkable words: Keep thy heart with all diligence; for out of it are the issues of life (4:23). Saint Xenia was able to preserve her heart and its most important treasure—faithfulness to Christ. This is the testimony of our dear Xeniushka’s life—the all-conquering power of faithfulness to Christ. This was the gift of her heart, and by following its call she was able to preserve her soul unharmed despite the vanity and opinions, mockery and flattering attention from those around her. She did not search for Christ in ascetical labors or in distance from this vain world, but simply remained faithful to His commandments, not afraid to immerse herself in the stormy sea of city noise. This path of outward madness that the saint followed was given to her by the Lord as a response to her sincere desire to preserve faithfulness to God and to her love for her husband, which the Lord had bestowed upon her heart. Her podvig remains hidden, but its fruits still make glad those who turn to St. Xenia for help. By her foolish-for-Christ she was doing no more than testifying to the truth that was firmly imprinted in her hearth: faithfulness to God can preserve one always and everywhere, under any circumstances. God guards us, and not we Him. Therefore, wherever there is sincere desire to follow the Gospel commandments, there is no longer fear in the face of reality. The faithful heart sees only God before itself, and places His reality, expressed in the Gospels, higher than everything visible. The one who is faithful to God is not afraid to take decisive steps, because he entrusts the Creator to direct them… Also testimony to the strength of a heart faithful to its Creator is St. Xenia’s amazing warmth and compassion, which make her close and dear to every Orthodox soul. 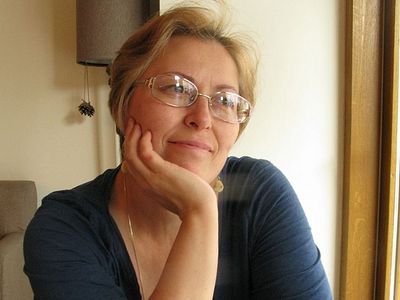 How St. Xenia helped a Muslim Woman Become an Iconographer
Olga Lunkova
I was born to a Muslim family. Both of my grandmothers were believers and prayed the namaz. My father’s mother was particularly pious—she prayed several times a day according to the Muslim custom, and she taught me the Muslim prayers. 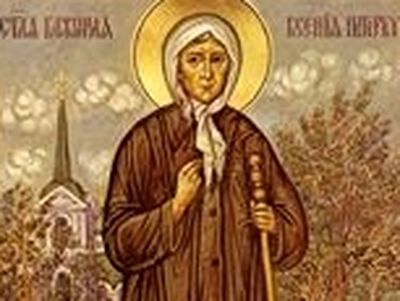 A Miracle of St. Xenia the Fool-for-Christ in France
The Conversion of a French Man to Orthodoxy

A Miracle of St. Xenia the Fool-for-Christ in France
The Conversion of a French Man to Orthodoxy
“I came to tell you,” she said to him, as she lifted her cane, “to stop ridiculing Yuri, who is praying, because you will remain here a long time yet, and will seek his prayers....”

"You Know Where to Go!" St. Xenia of Petersburg comes to Oakland
Nun Cornelia (Rees)

"You Know Where to Go!" St. Xenia of Petersburg comes to Oakland
Nun Cornelia (Rees)
Our biker rode off on his Harley Davidson, and soon had a terrible accident, which cost him his legs. Eventually he landed back in the company of his old “friends”, in a run-down apartment in a low-rent neighborhood in the bad part of a crime-ridden city.
Комментарии