Saint Damiane (in the world King Demetre I) was the son of Holy King Davit the Restorer.

King Davit proclaimed his son co-ruler of Georgia and crowned him with his own hands. He declared that his son Demetre, through his wisdom, chastity, bravery, and handsome appearance, would rule Georgia better than he himself had. Demetre acquired great glory while his father was still alive. In 1117 Davit sent him to Shirvan to fight, and the young commander astonished the people with his deftness in battle. Demetre seized Kaladzori Castle and returned home with many captives and much wealth.

King Demetre I struggled tirelessly to protect the inheritance he had received from his father: he guarded Georgia’s borders and fought to enlarge its frontiers. Many regions, including Hereti, Somkhiti, Tashiri, Javakheti, Artaani and the Tao border, were repopulated during King Demetre’s rule. These regions had been largely deserted after King Davit joined Tbilisi to the region of Heret-Kakheti.

King Demetre was never shaken by the evil intrigues plotted against him. First his noblemen revolted, demanding that his stepbrother, Vakhtang (Tsuata), replace him as king. (Ioane of Abuleti was the leader of this conspiracy.) Then Demetre’s own son Davit rebelled against him. Deeply disturbed by the behavior of his first-born son, the pious king could no longer bear the vanity of the world — he was tonsured a monk in the Davit-Gareji Wilderness and given the new name Damiane. He abdicated to his son, but Davit ruled just six months before he reposed.

While laboring at Davit-Gareji Monastery, Damiane composed many great hymns for the Church. His hymn to the Theotokos, “Thou Art the Vineyard,” is outstanding among these works. In order to protect the interests of the Georgian kingdom after his son’s death, Damiane was obliged to leave the monastery. He returned to the throne and intervened in the affairs of the government. At the same time he named another of his sons, Giorgi, co-ruler.

A 12th-century image of St. Damiane-Demetre was among the frescoes at the Davit-Gareji Monastery. In the 19th century the Russian traveler Andrew Muraviev reported seeing the fresco intact, but today only a narrow upper band of the image remains. A fresco of the pious king and monk Demetre has been preserved in the church at Matskhvarishi (now Latali) in the Svaneti region.

Armed with divine wisdom, purity, grace and bravery, O venerable Damiane, pray to God for us!

Venerable Zabulon and Sosana, Parents of the Equal-to-the-Apostles Nino (4th century)
Archpriest Zakaria Machitadze
According to Holy Tradition, St. Nino and Great-martyr George were blood relatives. At the same time as St. George’s martyrdom, a certain nobleman, the servant of God Zabulon, arrived in Rome from Cappadocia. Zabulon began to serve in the emperor’s army, and before long he was widely recognized as a courageous cavalryman and a fine soldier.

Venerable Basil, Son of King Bagrat (11th century)
Archpriest Zakaria Machitadze
Saint Basil, the son of King Bagrat III, lived in the 11th century and labored at Khakhuli Monastery (in southwestern Georgia, present-day Turkey). He was a major figure in the spiritual and educational life of southern Georgia.

Venerable Ekvtime of Mt. Athos, the Translator(†1028)
Archpriest Zakaria Machitadze
Venerable Ekvtime of Mt. Athos was the son of St. Ioane of Mt. Athos, a military commander during the reign of King Davit Kuropalates, who abandoned the world to enter the monastic life.While St. Ioane was laboring on Mt. Olympus, the Byzantine emperor returned a large portion of the conquered Georgian lands, but in exchange for this benefaction he ordered that the children of certain eminent aristocrats be taken to Constantinople as surety. 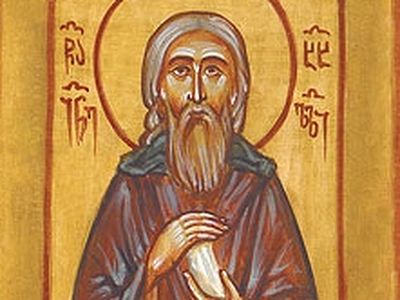 Holy Hierarch Ioane of Khakhuli, Also Called Chrysostom (10th–11th centuries)
Archpriest Zakaria Machitadze
In the second half of the 10th century King Davit Kuropalates founded Khakhuli Monastery in the historical region of Tao, at the gorge of the Khakhuli River, where it joins the Tortumi River. A contemporary of King Bagrat III (975–1014), St. Ioane of Khakhuli was a highly educated theologian, translator, and calligrapher. He has been called “Chrysostom” since he, like the beloved archbishop of Constantinople, delivered his sermons with extraordinary eloquence.