On the Feast of the Annunciation in the year 1625, the Georgians annihilated the army of the Persian shah Abbas I in the Battle of Martqopi. The victory unified Georgia’s eastern provinces of Kartli and Kakheti. It also instilled hope in other enslaved peoples of the Transcaucasus, and rebellions began to break out everywhere.

Soon the enraged Shah Abbas marched his finest and largest army toward Georgia under the leadership of Isa-Khan Qurchibash. A Georgian army of some twenty thousand men encamped near Kojori-Tabakhmela in preparation for the attack, while the enemy’s army, which numbered in excess of fifty thousand men, encamped at Marabda. According to tradition, the Georgian soldiers received Holy Communion at dawn before the battle.

Bishop Domenti (Avalishvili) of Ruisi prepared to serve the Holy Gifts to the soldiers but they cried out with a single voice: “If you will join us and take up your sword and fight, then do so. We can receive Holy Communion from another!”

Inspired by these words, the bishop joined in, proclaiming, “Today we will fight a battle for faith and for Christ; therefore my blood must be spilled before yours!”With his vestments as armor, the bishop blessed the soldiers and took his place in the front line.

The banner of the Georgian army was entrusted to the nine Kherkheulidze brothers.

The Persians panicked upon coming face-to-face with the courage and fortitude of the Georgian soldiers, but the experienced commander Isa-Khan Qurchibash would not yield in battle. Help arrived from Beglerbeg Shaybani-Khan, and with the extra forces the Persians soon gained the advantage over the Georgian army. The Georgian colonel TeimurazMukhranbatoni was fatally wounded, and rumors of his death threw the soldiers into a frenzy, since they erroneously believed that the dead man was King Teimuraz I of Kakheti, the commander of their army. Believing that their leader had fallen, the Georgian soldiers became anxious and their army was enfeebled. Before long they recognized their mistake, but it was too late—the fate of the battle had already been decided.

The military leaders Davit Jandieri, Aghatang Kherkheulidze and Baadur Tsitsishvili and the bishops of Rustavi and Kharchasho all fell in the battle at Marabda. The nine banner-bearing Kherkheulidze brothers were also killed. When the banner that had led their army through the battles at Didgori and Basiani fell from the hands of the youngest brother, their sister grabbed hold of it immediately, and when she also fell, the banner and symbol of Georgian invincibility was raised up again by their mother.

King Teimuraz fought until sunset, when every sword he had held in his hands had been broken. Even his rings were broken in the combat. The uniform of the brilliant military leader Giorgi Saakadze was stained with blood from top to bottom. Atabeg Manuchar of Samtskhe and his sons also fought bravely in this battle.

Utterly exhausted and debilitated by the heat, the Georgians fought heroically to the last moment. But the battle that had begun at dawn finally ended late that night with the defeat of the Georgian army. Nine thousand Georgians gave their lives for Christ and their motherland on the battlefield at Marabda.

Devout in faith and dedicated to the commandments of Christ, O Holy Martyrs of Marabda, pray to Christ God to protect our nation and His Holy Church! 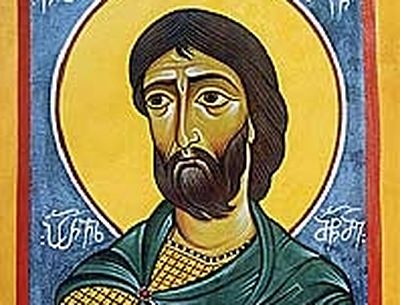 Saint Razhden, Protomartyr of the Georgian Church (†457)
Archpriest Zakaria Machitadze
Saint Razhden the Protomartyr was descended from a noble Persian family. When Holy King Vakhtang Gorgasali married the daughter of the Persian king Hormuzd III Balunducht, the queen took Razhden with her to Georgia. 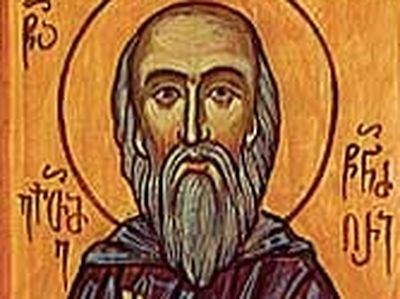 Venerable Ekvtime, Abbot of the Monastery of St. John the Baptist (†1804)
Commemorated August 8/21 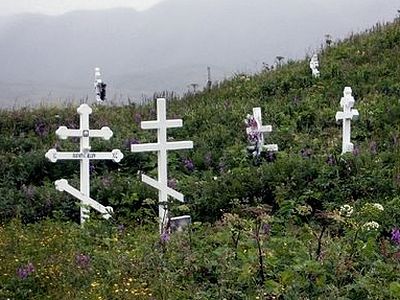 Why we need and honor the saints
Gabe Martini

Why we need and honor the saints
Gabe Martini
Some Christians object to the idea of honoring Saints—whether that be venerating their relics and images, or asking them for their prayers—because they feel it is to ignore the living already with us in the Church here on earth. They will suggest that a danger lies in only “speaking with the dead,” as the dead either cannot or will not talk back to us, redirecting us when straying from the straight-and-narrow. But is this really the case?

Venerable Finnian, Abbot of Clonard
Commemorated December 12/25
Dmitry Lapa
The disciples of Clonard established hundreds of churches and monasteries in Ireland as well as in other countries. According to a custom which existed in Clonard, every monk who left the monastery as a missionary took with him a copy of the Gospels, a crozier and some holy object and later, when building his own church or monastery, placed these relics inside it. 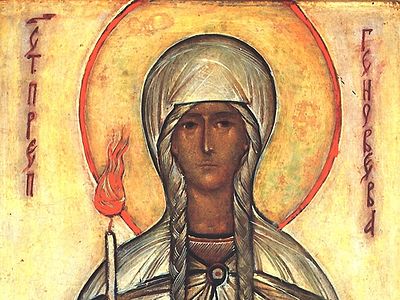 Venerable Genevieve of Paris
When she was fifteen, Genevieve was taken to Paris to enter the monastic life. Through fasting, vigil and prayer, she progressed in monasticism, and received from God the gifts of clairvoyance and of working miracles. Gradually, the people of Paris and the surrounding area regarded Genevieve as a holy vessel (2 Tim. 2:21).