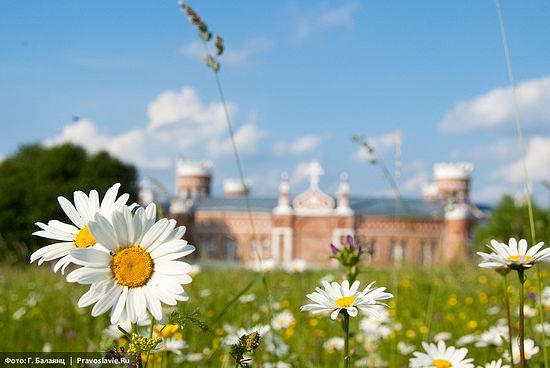 In the name of the Father, the Son and the Holy Ghost

We have heard in the Acts of the Apostles how, as the Feast of Pentecost was approaching, Paul the Apostle had started on his journey to Jerusalem to be there together with all those who on that very day received the Holy Spirit. Of all of them he was the only one who had not been present in the High Room where the event took place. And yet, God had given him a true, a perfect conversion of heart, and of mind and of life, and had given him freely the gift of the Holy Spirit in response to his total, ultimate gift of self to Him, the God Whom he did not know but Whom he worshipped.

We also are on our way to the day of Pentecost, next week we will keep this event. When Paul was on his way, he thought of what had happened to himself in the solitude of his journey from Jerusalem to Damascus and in the gift of the Spirit mediated to him by Ananias. And we also, each of us singly and all of us together should reflect on all that God has given us. He has given us existence and breathed life into us, - not only the life of the body, but a life that makes us akin to Him, His life. He has given us to know Him, the Living God, and He has given us to meet, in the Gospel and in life, His Only Begotten Son, our Lord Jesus Christ. In Baptism, in the Anointment with Holy Chrism, in Communion to the Body and Blood of Christ, in the mysterious, silent communion of prayer, in the moments when God Himself came near, although we were not thinking of Him, He has given us so much.

Let us reflect on all that is given us, asking ourselves whether we are truly disciples of Christ. We know from Saint Paul what it means to be a disciple: he said that for him, to live is Christ, to die will be a gain, because as long as he is in the flesh he is separated from Christ, Christ Whom he loves, Christ Who has become everything to his life, not only in time but for all eternity. And yet, says he, he is prepared to live, not to die, because his presence on earth is necessary to others. This is the measure of communion he had with Christ. And this is shown so movingly in a parallel between a small phrase in the Acts of the Apostles and in the Gospel: both the Lord Jesus Christ and His disciple say that they are now going back to the Father, that the time of their departure has come. His life in Christ had culminated in such identification with what Christ stood for, and beyond that with what Christ was, that whatever was applicable to Christ became applicable to him. Indeed, for him to live was Christ, and he longed for his death, but he had learned from God something more than this longing for freedom, for communion with the God Whom he adored and served so faithfully, - he had learned that to give is a greater joy than to receive.

The saints had heard Christ say, 'No one has greater love that he who gives his life for his friends'. Paul, the other apostles, and innumerable saints after them gave their lives, shed their lives day after day forgetting themselves, rejecting every thought, every concern about themselves, having thought only for those who needed God, who needed the word of truth, who needed love divine. They lived for others, they gave as generously as they had received.

We also are called to learn the joy, the exhilarating, the wonderful joy of giving, of turning away from ourselves to be free to give, and of giving on all levels, the smallest things and the greatest things. And this can be taught us only by the power of the Holy Spirit that unites us to Christ, makes us into one body with Him, a body of people, bound with each other in their total togetherness, one with the God who is our unity.

Let us think of all we have received from God and ask ourselves: what can we give first to Him so that He can rejoice in us, so that He can know that He has not lived and died in vain. And what can we give to all those who surround us, beginning with the smallest, the humblest gifts to those closest to us and ending with giving all we can to those who need more. And then truly Pentecost will come as a gift of life, a gift that unites us, welds us into one body capable of being to others a vision on earth of the Kingdom, but also a source of life and of joy, so that truly our joy, and the joy of all those whom we meet should be fulfilled. Amen. 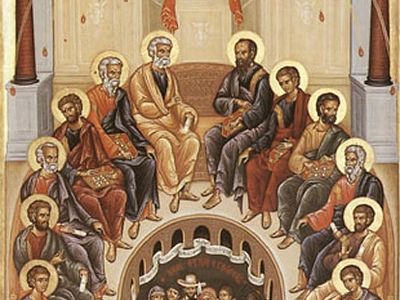 The Feast of the Holy Trinity (Pentecost) Hieromonk Job (Gumerov)

The Feast of the Holy Trinity (Pentecost) Hieromonk Job (Gumerov) The custom of adorning the church with tree branches, flowers, and grass goes back to ancient times. The Old Testament Pentecost was the feast of the first harvest (Ex. 23:16). People brought the first fruits of their harvest and flowers into the court of the Temple. In New Testament times, the trees and other plants in the church symbolize the renewal of people through the power of the Holy Spirit which has descended. 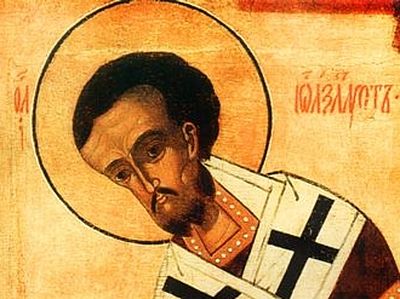 On the Descent of the Holy Spirit From the Homilies on the Acts of the Apostles
by St. John Chrysostom Homily I. Acts 1:1–2

On the Descent of the Holy Spirit From the Homilies on the Acts of the Apostles by St. John Chrysostom Homily I. Acts 1:1–2 But why did the Holy Ghost come to them, not while Christ was present, nor even immediately after his departure, but, whereas Christ ascended on the fortieth day, the Spirit descended when the day of Pentecost, that is, the fiftieth, was fully come (Act. 2:1)? And how was it, if the Spirit had not yet come, that He said, Receive ye the Holy Ghost (Jn. 20:22)? In order to render them capable and meet for the reception of Him. 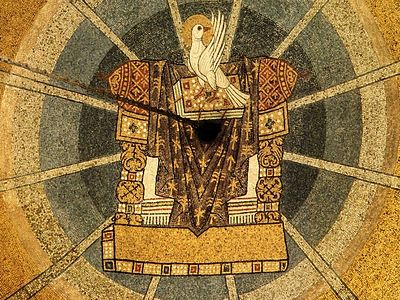 Questions and answers on Pentecost Archpriest Andrew Phillips Would you say that Pentecost is the most important feast after the Nativity of Christ? What does the word Pentecost mean? Can you say something about the days immediately before and after Pentecost?..
Комментарии