St Nicodemus the Sanctified of Tismana 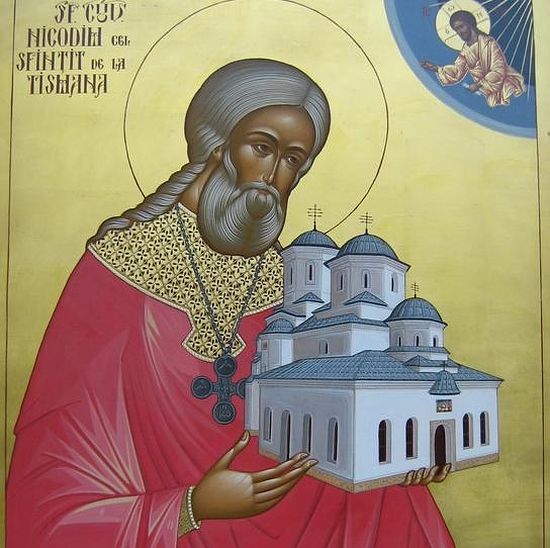 Pious Nicodemus was of Macedonian-Romanian origin. He was born in Prilep, in the South of Serbia, about 1320, being related to the ruling prince of Wallachia Nicolae Alexandru Basarab (1352-1364) and to Holy Prince Lazar of Serbia (1371-1389). He learned to read the Holy Scriptures from childhood and loved to serve Christ. While his parents wished to see him holding high positions according to their rank, he gave up all his parents’ fortune and the fame of the world. Dressed in poor clothes he fled his parents’ house and went to Holy Mount Athos, where he entered Hilandar Monastery. After three years of discipleship he was tonsured into monasticism, then ordained deacon, and after some time, a priest. Later he went back to Serbia, where he set up two monasteries and a parish church. In about 1369, Saint Nicodemus arrived in Wallachia, miraculously crossing the River Danube. With the blessing of Saint Hyacinth, then metropolitan of Wallachia, he settled here and set up Motru and Vodiţa Monasteries. In 1375, Saint Nicodemus was a member of the delegation that went to the Patriarchate of Constantinople to reconcile it with the Church of Serbia after some disagreements. Saint Patriarch Philotheus of Constantinople (1354-1355; 1364-1376) highly esteemed Saint Nicodemus, elevated him to the rank of archimandrite, and gave him a patriarchal staff and three particles of holy relics.

He came back to Wallachia where, through divine instruction, he set up Tismana Monastery in 1378. Pious Nicodemus settled there together with some of his disciples, but the number of those who would serve Christ under the spiritual guidance and advice of the wise abbot was increasing. He taught them all kindly and guided them to fulfill the will of God. Saint Nicodemus was a great founder and organizer of the monastic life here, according to the regulations of the Holy Mount Athos, and his disciples also founded, helped by the righteous Romanian ruler princes, the first coenobitic monasteries of Wallachia, which also had the task of opposing Catholic proselytism.

In the course of time, Tismana Monastery benefited from the help of ruling princes Radu I (1377-1383), Dan I (1382-1386) and Mircea the Old (1386-1418), to whom the pious Nicodemus was father confessor. Between 1399 and 1405 he retreated to Prislop Monastery in Transylvania and in 1406 he returned to Wallachia. Soon afterwards, Saint Nicodemus met ruler prince Mircea the Old at Tismana, who called him “my prayerful father Nicodemus”, and in November he participated at Severin in the meeting with king Sigismund of Hungary (1385-1437), whom he impressed with his gift of working miracles.

Saint Nicodemus corresponded with Euthymius, Patriarch of Tarnovo (1375-1393), for defending the true faith against the Bogomil heresy. 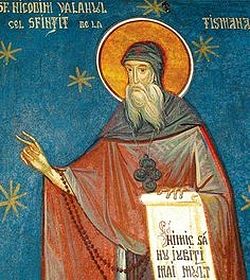 Saint Nicodemus fell asleep in the Lord on 26 December 1406 and was buried in the narthex of the large church of Tismana Monastery. His relics were kept for a while at Tismana, but later they were hidden in an unknown placed because of the hostilities of the time. Only the forefinger of his right hand and his lead pectoral cross remained at Tismana.

The holiness of his life and the miracles he worked both during his lifetime and after his falling asleep in the Lord made the faithful venerate archimandrite Nicodemus as a saint as soon as he departed from this world. In 1955, the Holy Synod of the Romanian Orthodox Church decrees the general the veneration of Pious Nicodemus across the Romanian Patriarchate, as the reviver of Romanian coenobitic monasticism and protector of Oltenia.

Through his holy prayers, Lord Jesus Christ, our God, have mercy on us. Amen. 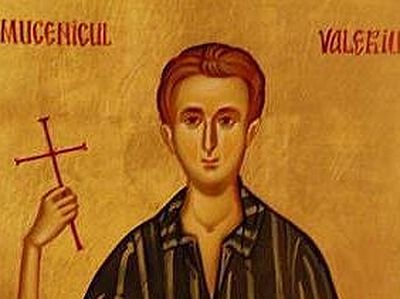 A Contemporary Confessor and Martyr for Christ: Valeriu Gafencu
Commemorated February 5/18
Among the many portraits of the confessors, one will be found in particular that is recalled with reverence by all and is considered a saint: Valeriu Gafencu. Nicknamed “the saint of the prisons” by Father Nicolae Steinhardt in a truly inspired moment, Valeriu Gafencu was one of the more impressive figures who lived an admirable spiritual life amidst prison conditions. 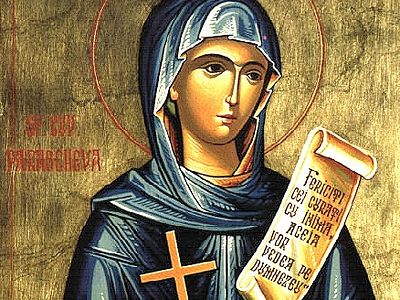 Venerable Parasceva (Petka)
Commemorated October 14/27
St. Nikolai Velimirovich
The virgin Parasceva always yearned for the ascetic life for the sake of Christ. After her parents' repose, she left her home and went first to Constantinople, then to the wilderness of Jordan, where she lived the ascetic life until old age. Who can express all the labors, sufferings and demonic temptations that St. Parasceva endured in the course of her many years?

A portrait of elder Arsenie (Boca) is “weeping” in Vaslui, Romania
Residents of the Romania’s Vaslui county are convinced that late Hieromonk Arsenie (Boca; 1910-1989, a prominent elder and confessor) is truly working miracles.
Комментарии