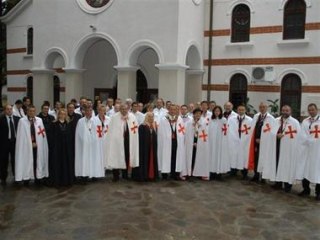 On May 18-19, in the Bulgarian resort of Nesebar an international meeting of "Templar knights" took place during which the head of Bulgarian "Templars" and high degree mason Rumen Ralchev expressed his hope that under the new Bulgarian Patriarch Neophyte, relations between the Bulgarian Orthodox Church and the order will improve. "It is necessary for the Church to accept our help!" said Ralchev who also expressed his hope (though it is not clear what is his hope based on) that soon the clergy of the Bulgarian Orthodox Church would no longer refuse to bless churches built on funds raised by "Templars".

Regarding the ideology of the organization headed by him, Ralchev has informed that the order is not a Masonic lodge: not only Masons but members of other similar organizations can become its members and the order itself "is not in rivalry with the Church."

"Templars" consider themselves to be "Christian knights" and actively use religious themes. The order is planning to build an Orthodox Bulgarian paraklis on the bank of the Jordan and it has given 25,000 euros for purchasing the land and construction. It is also going to promote holding “young knight” programs in Bulgarian schools, and within the framework of this program the "Templars" are intending to teach children "major religious practices, history and Christianity."

The Bulgarian Orthodox Church has not formulated its official position regarding existence and activities of Masonic and "Templar" organizations yet; it just sent out a message that forbids its clergy wearing Church vestments to participate in ceremonies of such organizations. Nevertheless, the traditional position of the Orthodox Church is the following: Christians cannot be members of Masonic or quasi-Masonic societies even if they advertise themselves as "Orthodox", explains Sedmitza.ru.