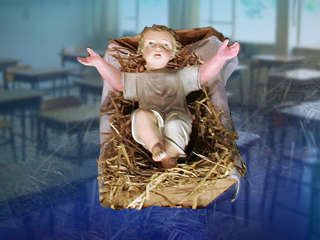 Parents were outraged after a Long Island, N.Y., middle school removed religious references from a traditional Christmas carol at a holiday concert.

The phrases "holy infant" and "Christ the savior" were removed from the song Silent Night because school officials said they didn't want to offend anyone.

Several parents at Ralph J. Osgood Intermediate School objected to the deletions, saying that taking the words out of the song is offensive to Christians.

"Silent Night at its core is a religious song," Kevin McDonald, a parent, argued at the Dec. 17 board meeting. "It's a sacred, religious hymn that tells the story of Jesus's birth."

School officials later admitted it was a mistake to remove those words.

"I apologize...Going forward, it's not going to happen again. They will be more cautious and cognizant of this particular issue when they select a song," Kings Park Patch quoted Superintendent Susan Agruso.

"They meant nothing wrong," she continued. "Clearly we could have done something different, and in the future we will."