Iraqi Christians are raped, murdered and driven from their homes – and the West is silent

Source: The Telegraph
By Tim Stanley 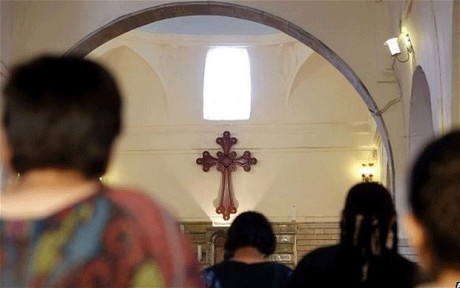 For the first time in 1,600 years, Mass is not being said in Mosul: an ancient culture has been wiped out in a matter of weeks. It's a war crime that, strangely, no one seems to want to talk about.

Mosul is the second-largest city in Iraq and the place where many Christians believe Jonah was buried. Since the Islamic State of Iraq and Syria (Isis) rode into town, their faith has been forced underground. Bells have been silenced, the hijab enforced with bullets. Tens of thousands fled after being offered an unattractive choice: convert, pay a religious tax, or be put to the sword. The levy was unaffordable. According to one local news agency, Isis troops entered the house of a poor Christian and, when they didn’t get what they wanted, the soldiers raped the mother and daughter in front of their husband and father. He committed suicide out of grief.

Having driven away the worshippers, the Isis fanatics are now trying to extinguish the physical legacy they left behind. A centuries-old church has been burned to the ground; Jonah’s tomb has been desecrated. Isis wants to create the Islamic equivalent of Year Zero, a brave new world with no evidence of Christianity, women’s rights, democracy or even that most subversive of instincts, human pity.

It might seem like this revolution has nothing to do with us in the West, but that's more than a little naive. The genocide of local Christians did not begin with Isis but with the 2003 invasion of Iraq. Prior to the conflict, there were 1.5 million “Chaldeans, Syro-Catholics, Syro-Orthodox, Assyrians from the East, Catholic and Orthodox Armenians” in the country – living, of course, under the tyranny of Saddam Hussein, butliving nonetheless. Today, their number has dropped to just 400,000. Religious violence peaked in the first four years of the invasion and then declined dramatically after the US-led surge. There was a hope that President Nouri al-Maliki would live up to his initial promise to protect religious minorities. But the rise of Sunni opposition to the Shiite regime in Baghdad sparked a second phase of persecution against Iraqi Christians.

Over the border came Isis, a particularly virulent strain of Islamism previously incubating in Syria’s civil war. Bashar al-Assad’s refusal to surrendered power in Damascus has destabilised the region yet further (the use of gas weaponry has a tendency to court opposition) and his own Christians have found themselves trapped in the middle of an internecine Islamic bloodbath: it was one year ago in the northern Syrian city of Raqqa where Isis first experimented with its instruction to “convert, pay a tax or die”. The Syrian patriarch of the Melkite Greek Catholic Church has estimated that perhaps 25 per cent of his country’s 2 million refugees are Christian.

The West’s direct intervention in Iraq created Hell on Earth for its Christian citizens, while the West’s lack of action in Syria (out of deference to its failings in Iraq) has permitted a regrouping of Islamist forces and the opening of a second front against Christians. The lesson is: “either leave other countries alone or, if you must intervene, do so with consistency and resilience”. The consequences of going in, messing things up and then quitting with a weary shrug are terrible for those left behind.

Yet, having been so intimately involved in the collapse of Iraq, the West is now bizarrely silent about events in Mosul. The streets of London fill with thousands marching against Israel’s military operation in Gaza; the West rails mightily against the Russian separatists in Ukraine. But of Iraq there is nothing. Why?

It could be that no Westerner wants to return to Iraq, that politicians fear that even discussing the country will lead voters to fear yet another invasion and yet another bloody occupation. Or it could be that we feel embarrassed about the very idea of Christians as a persecuted minority. The reporter John Allen argues that Westerners have been trained to think of Christians as “an agent of aggression, not its victim” - so we're deaf to pleas for help. That opinion is supported by Ed West in an excellent e-book, and its consequences have been condemned by religious leaders here in the UK. Rabbi Jonathan Sacks has compared the suffering of Middle East Christians with Jewish pogroms in Europe and reminded everyone of the words of Martin Luther King: “In the End, we will remember not the words of our enemies, but the silence of our friends.” It would indeed be awful to think that the West might remain silent as violence rages purely out of a failure to recognise that Christians can be victimised, or out of a reluctance to cast aspersions on certain brands of Islam. It would make this the first genocide in history to be tolerated out of social awkwardness.

The West’s response to Mosul is worthy of contempt: if we won’t speak out for Christians, who will? But any disgust at our own moral cowardice should be balanced by admiration for the Iraqis who continue to bear witness to their faith in a land that moves closer and closer to outlawing it. Their resilience illustrates the difference between fundamentalist Islam and Christianity: the former is a religion of killers, the latter is a religion of martyrs. And for those of us who share the faith of the thousands fleeing Mosul, Jesus's own sacrifice offers hope – a reminder that victory is guaranteed for those who endure: "Yea, though I walk through the valley of the shadow of death, I will fear no evil: for thou art with me; thy rod and thy staff they comfort me." Whatever your faith, please pray for the Christians of Mosul. 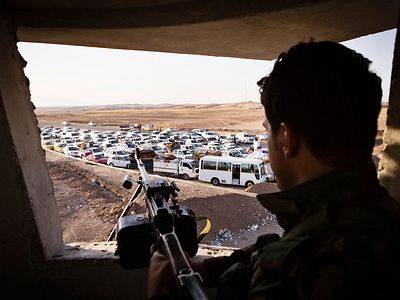 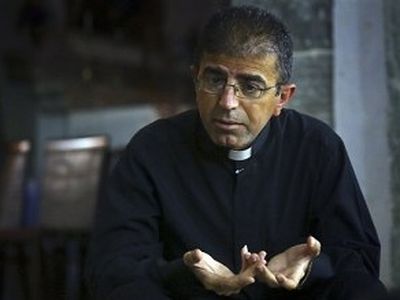 Iraqi Christians flee homes amid militant push "I'm not going back," said Lina, who fled Mosul with her family as the militants swept in and came to Alqosh, about 50 kilometers (31 miles) to the north. 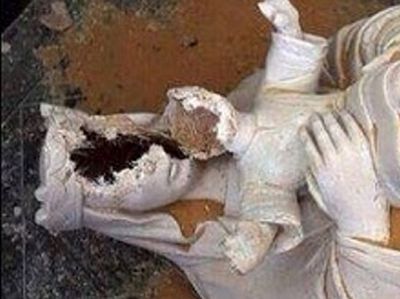 Mosul under control of Caliphate: killing, violence and destruction of churches

Mosul under control of Caliphate: killing, violence and destruction of churches A wave of killings and violence has swept the Iraqi city of Mosul after “The Islamic state of Iraq and the Levant” militants seized the Nineveh province. The punitive actions of the takfirists were caused by refusal of some Christians of the city to submit to the new laws, introduced by the extremists.
Комментарии
David23 июля 2014, 09:00
The calculated silence and/or minimization of the unprecedented decimation of Christianity in the Holy Land borders on the morality of the holocaust deniers when Jews and Armenians were the victims in the early and mid 20th century.