The Unbearded Jesus: The Story of the 5th Century Mosaic of Latomou Monastery St David of Thessaloniki 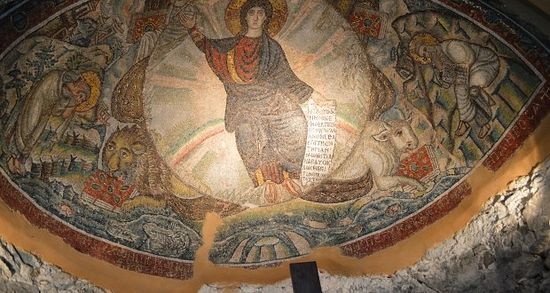 In a church dedicated to St David of Thessaloniki, the Tree-Dweller, or Dendrite, a monk that lived his entire life in the branches of an almond tree, a church whose foundations were a Roman temple, later destroyed as a Byzantine church, converted into a mosque and recently in the 1930’s rebuilt by Asia Minor Greeks fleeing Turkish aggression, exists a most intriguing work of art. It is a 5th century mosaic of Christ as a youth sitting on an arc in the rainbow His left hand up in salute while his other rests on the rainbow. The mosaic is unique, not only because it is only one of three intact dating from that period, not only because it breaks with the rules in traditional Byzantine church architecture that usually places a depiction of the Madonna and Child in the central dome and focal point, but because the mosaic is enigmatic in its symbolism. The figure of the youthful Christ is hard to recognize at first: is it an angel? One of the prophets? A saint? It is hard to tell who this figure in white is. Why? Because the figure lacks a beard.

The history of this chapel tucked away in Ano Poli, one of the hilltop communities of the city of Thessaloniki, tells the story of the city in miniature form. The chapel was constructed secretly under the command of the Princess Theodora, a secret convert to Christianity. She was later betrayed, according to some sources, by her own mother and was executed as a traitor to the Roman state by her father the Roman governor of the province at the time. Other accounts state the church’s patron was constructed was the daughter of the emperor Maximian Galerius. In the early 9th century, the monastery operated as the main church of Monastery Latomou, which was named after the quarries (“latomio” in Greek) of the area. During the 16th century, it was turned into a mosque, while during the previous century it was falsely named as Osios David. Beyond its impressive architecture, which is considered to be a precursor of the cross shaped type with a dome, it features the great tessellation that depicts Ezekiel’s vision and murals dated from the 12th, 13th and 14th century, all great representative specimens of the Byzantine art in Thessaloniki. The history and unique architecture of the monastery contributed to its declaration as a UNESCO World Heritage Site. 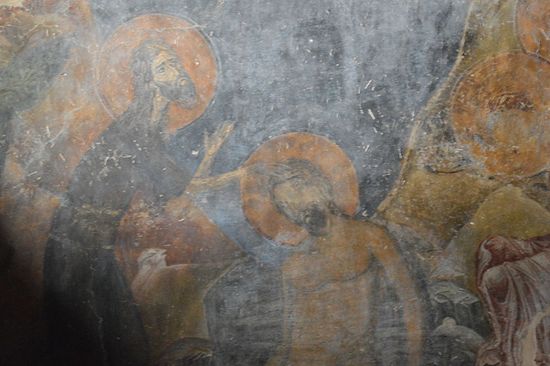 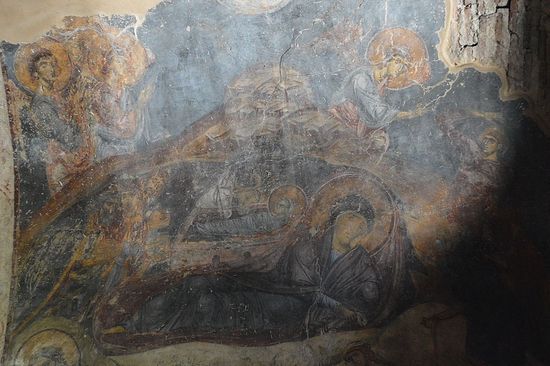 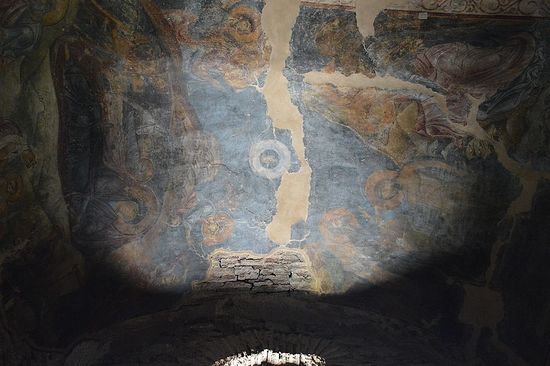 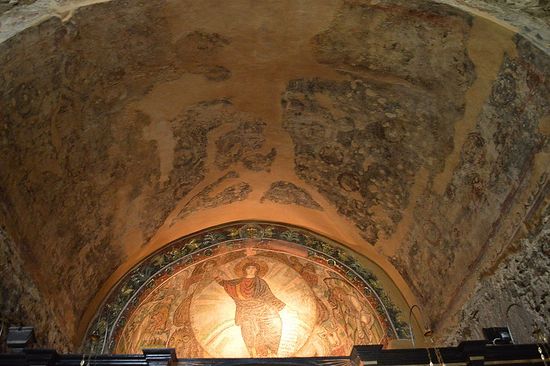 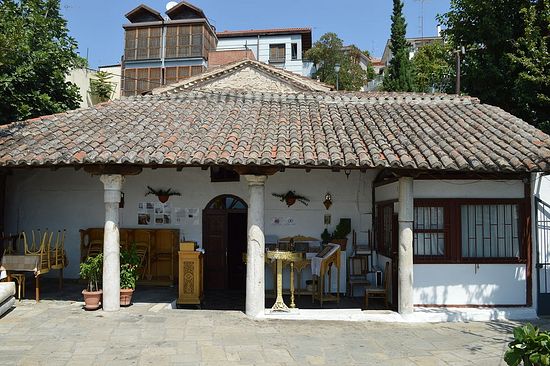 According to the young volunteer church warden, the mosaic itself escaped destruction and persecution by the reigning pagans probably because it was located in an underground part of town populated by the lower classes and because devout Christians covered the mosaic on the walls with sheepskin parchment which they then plastered over.

Symbols of the Mosaic

The symbols behind the icon further deepen its already apparent glory. From a panoramic view, the almond-shaped focal point becomes an eye. The seated Jesus becomes the iris. Because of the concave niche the mosaic is built on it is hard to tell, are you on the inside looking out through the eye or are you on the outside looking in? To the left and right of the focal point are two symbolic figures from the Old Testament, the prophet Ezekiel whose vision inspired the image of Christ on the rainbow and the Prophet Habbakuk. Their depictions correspond to the references predicting the advent of the Messiah in the Old Testament Scriptures. But their artistic rendering places them symbolically as two complementary dichotomies or approaches to experiencing Christ: one with the heart, the other with the mind. First the prophet on the left sits crouching on knees his hands held up by his head his face in an expression of surprise or awe. The shape of his mouth makes him appear as if he is shouting or exclaiming in surprise. He represents the aesthetic and emotional stance that humans take to meeting the living God. On the other side, the prophet is cool and collected. He is rendered in the tradition of an ancient Greek philosopher; he is holding his head with one hand while clutching a book in the other. He represents the logical or rational approach to meeting God. Taken together they form the two ways the human soul comes to an understanding of the Divine.

The physical space also helps to magnify the glory of this rare work of art. The original church entrance, in contrast to the one today, faced east. There is an eastern facing window in front of the mosaic dome. Given that the 5th century structure must have been shrouded in secrecy, with many liturgies taking place during the darkest hours of the night, could you imagine the splendor of the place when the first rays of the dawning sun beamed through the dark interior and set the majestic figure of the Lord aflame in bright light, a true symbol of the sun as the eternal Son? The genius iconographer, completely anonymous to this day, used the sun as a technicolor tool to set the figure of Christ seated on a rainbow in a golden glow just at the climax of the Christian liturgy when congregants partake in the body and blood of Christ. He compounded the symbolic significance of the icon by mixing both human hand crafted symbols with physical ones in real time that would together underscore the truth of Christian theology: God became man so that man could become godly. The human and the divine become one in both symbolic and physical reality.

This icon mosaic is a magnificent masterpiece. One would think that everyone should know about it. But according to the theory disclosed by the warden, sometimes the best things have to be kept secret. The warden assured me that the miracle of its endurance testifies to the underground nature of the neighborhood of Ano Poli. Indeed since Princess Theodora’s time the neighborhood of Ano Poli had a reputation as a ghetto. 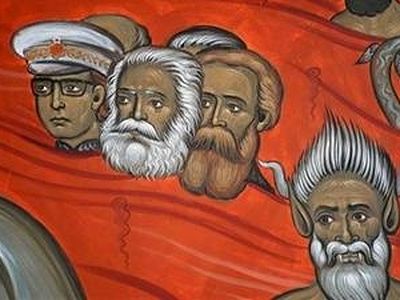 Communists roast in hell in Montenegro fresco Look up at the wall and you can see Yugoslavia's late autocratic leader Josip Broz Tito drowning in red fiery waves of hell - along with Karl Marx and Friedrich Engels, authors of the 1848 Communist Manifesto. 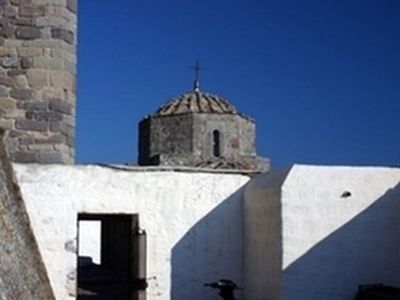 Monastery of St. John, Greece The monastery consists of interconnecting courtyards, chapels, stairways, arcades, galleries and roof terraces. Hidden in the walls are fragments of an ancient temple of Artemis that was destroyed in the 11th century. The main chapel is lovely, as is the adjoining Chapel of the Theotokos, whose frescoes date from the 12th century.

Mozaicon. Vibrant Romanian Mosaics Mozaicon was started by a group of Romanian fresco artists who came together in 2008 to create the mosaics for the Patriarchal Cathedral Complex in Bucharest.
Комментарии
J Clivas 7 октября 2015, 02:00
The Saviour's hand is holding a scroll, not "resting on the rainbow".