That is an Georgian Orthodox priest, Father Seraphim, and his choir chanting Psalm 53 in Aramaic, when Pope Francis visited the cathedral in Tbilisi earlier this month. He is of Assyrian descent; there is an Assyrian population in Georgia. This chant is astonishingly beautiful. As you listen to it, keep in mind the text of Psalm 53. These are the words they are chanting in Aramaic:

The fool hath said in his heart, There is no God. Corrupt are they, and have done abominable iniquity: there is none that doeth good.

God looked down from heaven upon the children of men, to see if there were any that did understand, that did seek God.

Every one of them is gone back: they are altogether become filthy; there is none that doeth good, no, not one.

Have the workers of iniquity no knowledge? who eat up my people as they eat bread: they have not called upon God.

There were they in great fear, where no fear was: for God hath scattered the bones of him that encampeth against thee: thou hast put them to shame, because God hath despised them.

Oh that the salvation of Israel were come out of Zion! When God bringeth back the captivity of his people, Jacob shall rejoice, and Israel shall be glad.

Here, in a vastly more humble setting, is Father Seraphim and a smaller choir singing the Trisagion hymn in Aramaic. The words mean: “Holy God, Holy Mighty, Holy Immortal, have mercy on us.” 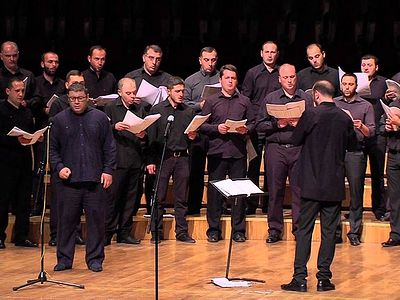 The Choir of Trinity (Sameba) Cathedral, Tbilisi
Simon Appleby
Georgia’s three-part polyphonic vocal style is quite unique, and there are some who consider the polyphony, periodically converging into unison, as being emblematic of the nature of the Trinity itself. 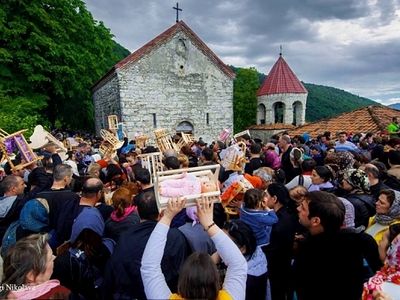 21st century miracle in Georgia: A church where childless couples find mercy
Thousands of couples visit the temple to ask for a child and many of them later return to express gratitude. The number of those whose dreams came true is quite high and they try to comfort others, saying they should believe in miracles as they really happen in this church.

Jeffrey Hoffman25 октября 2016, 05:00
Actually, the text for Psalm 53 in both the Roman Catholic and Orthodox Bibles is the text for Psalm 54 in English Bibles, as the English Bible follows the Masoretic numbering of the Psalms, whereas the Orthodox Bible and the Latin Vulgate followed the numbering of the Septuagint, which conflated Psalms 9 and 10 in one psalm, Psalm 9. I think if you look at this particular Psalm (in the 1662 Book of Common Prayer translation) here, you'll see it matches the character of the music far better than the Psalm you mistakenly understood it to be. SAVE me, O God, for thy Name’s sake : and avenge me in thy strength. 2. Hear my prayer, O God : and hearken unto the words of my mouth. 3. For strangers are risen up against me : and tyrants, which have not God before their eyes, seek after my soul. 4. Behold, God is my helper : the Lord is with them that uphold my soul. 5. He shall reward evil unto mine enemies : destroy thou them in thy truth. 6. An offering of a free heart will I give thee, and praise thy Name, O Lord : because it is so comfortable. 7. For he hath delivered me out of all my trouble : and mine eye hath seen his desire upon mine enemies.