From: The Orthodox Veneration of Mary the Birthgiver of God

The Veneration of the Mother of God During Her Earthly Life 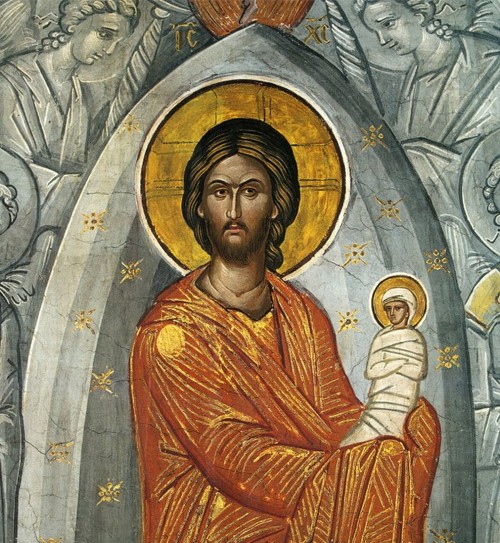 FROM APOSTOLIC TIMES and to our days all who truly love Christ give veneration to Her Who gave birth to Him, raised Him and protected Him in the days of His youth. If God the Father chose Her, God the Holy Spirit descended upon Her, and God the Son dwelt in Her, submitted to Her in the days of His youth, was concerned for Her when hanging on the Cross - then should not everyone who confesses the Holy Trinity venerate Her?

Still in the days of Her earthly life, the friends of Christ, the Apostles, manifested a great concern and devotion for the Mother of the Lord, especially the Evangelist John the Theologian, who, fulfilling the will of Her Divine Son, took Her to himself and took care for Her as for a mother from the time when the Lord uttered to him from the Cross the words: “Behold thy mother.”

The Evangelist Luke painted a number of images of Her, some together with the Pre-eternal Child, others without Him. When, he brought them and showed them to the Most Holy Virgin, She approved them and said: “The grace of My Son shall be with them,” and repeated the hymn She had once sung in the house of Elizabeth: “My soul doth magnify the Lord, and My spirit hath rejoiced in God My Saviour.”

However, the Virgin Mary during Her earthly life avoided the glory which belonged to Her as the Mother of the Lord. She preferred to live in quiet and prepare Herself for the departure into eternal life. To the last day of Her earthly life She took care to prove worthy of the Kingdom of Her Son, and before death She prayed that He might deliver Her soul from the malicious spirits that meet human souls on the way to heaven and strive to seize them so as to take them away with them to Hades. The Lord fulfilled the prayer of His Mother and in the hour of Her death Himself came from heaven with a multitude of angels to receive Her soul.

Since the Mother of God had also prayed that She might bid farewell to the Apostles, the Lord gathered for Her death all the Apostles, except Thomas, and they were brought by an invisible power on that day to Jerusalem from all the ends of the inhabited world, where they were preaching, and they were present at Her blessed translation into eternal life.

The Apostles gave Her most pure body over to burial with sacred hymns, and on the third day they opened the tomb so as once more to venerate the remains of the Mother of God together with the Apostle Thomas, who had arrived then in Jerusalem. But they did not find the body in the tomb and in perplexity they returned to their own place; and then, during their meal, the Mother of God Herself appeared to them in the air, shining with heavenly light, and informed them that Her Son had glorified Her body also, and She, resurrected, stood before His Throne. At the same time She promised to be with them always.

The Apostles greeted the Mother of God with great joy and began to venerate Her not only as the Mother of their beloved Teacher and Lord, but also as their heavenly helper, as a protector of Christians and intercessor for the whole human race before the Righteous Judge. And everywhere the Gospel of Christ was preached, His Most Pure Mother also began to be glorified.

The First Enemies of the Mother of God

THE MORE the faith of Christ spread and the Name of the Savior of the world was glorified on earth, and together with Him also She Who was vouchsafed to be the Mother of the God-man, the more did the hatred of the enemies of Christ increase towards Her. Mary was the Mother of Jesus. She manifested a hitherto unheard-of example of purity and righteousness, and furthermore, now departed from this life, She was a mighty support for Christians, even though invisible to bodily eyes. Therefore all who hated Jesus Christ and did not believe in Him, who did not understand his teaching, or to be more precise, did not wish to understand as the Church understood, who wished to replace the preaching of Christ with their own human reasoning all of these transferred their hatred for Christ, for the Gospel and the Church, to the Most Pure Virgin Mary. They wished to belittle the Mother, so as thereby to destroy faith also in Her Son, to create a false picture of Her among men in order to have the opportunity to rebuild the whole Christian teaching on a different foundation. In the womb of Mary, God and man were joined. She was the One Who served as it were as the ladder for the Son of God, Who descended from heaven. To strike a blow at Her veneration means to strike Christianity at the root, to destroy it in its very foundation.

And the very beginning of Her heavenly glory was marked on earth by an outburst of malice and hatred toward Her by unbelievers. When, after Her holy repose, the Apostles were carrying Her body for burial in Gethsemane, to the place chosen by Her, John the Theologian went ahead carrying the branch from paradise which the Archangel Gabriel had brought to the Holy Virgin three days before this when he came from heaven to announce to Her approaching departure to the heavenly mansions.

“When Israel went out of Egypt, and the house of Jacob from among a barbarous people,” Peter began Psalm 113; “Alleluia,” sang the whole assembly of the Apostles together with their disciples, as for example, Dionysius the Areopagite, who likewise had been miraculously transported at that time to Jerusalem. And while this sacred hymn was being sung, which was tallied by the Jews the “Great Alleluia,” that is, the great “Praise ye the Lord,” one Jewish priest, Athonius, leaped up to the bier and wished to overturn it and throw to the ground the body of the Mother of God.

The brazenness of Athonius was immediately punished: the Archangel Michael with an invisible sword cut off his hand, which remained hanging on the bier. The thunderstruck Athonius, experiencing a tormenting pain, in awareness of his sin turned in prayer to the Jesus Whom he had hated up to then, and he was immediately healed. He did not delay in accepting Christianity and confessing it before his former co-religionists, for which he received from them a martyr’s death. Thus, the attempt to offend the honor of the Mother of God served for Her greater glorification.

The enemies of Christ resolved not to manifest their lack of veneration for the body of the Most Pure One further at that time by crude violence, but their malice did not cease. Seeing that Christianity was spreading everywhere, they began to spread various vile slanders about Christians. They did not spare the name of the Mother of Christ either, and they invented the story that Jesus of Nazareth had come from a base and immoral environment, and that His Mother had associated with a certain Roman soldier.

But here the lie was too evident for this fiction to attract serious attention. The whole family of Joseph the Betrothed and Mary Herself were known well by the inhabitants of Nazareth and the surrounding countryside in their time. Whence hath this man this wisdom and these mighty works? Is not this the carpenter’s son? Is not his mother called Mary, and his brethren! James and Joseph and Simon and Judas? And his sisters, are they not all with: us? (Matt. 13:54-55; Mark 6:3; Luke 4:22.) So said His fellow-countrymen in Nazareth when Christ revealed before them in the Synagogue His otherworldly wisdom. In small towns the family matters of everyone are well known; very strict watch was kept then over the purity of married life.

Would people really have behaved with respect towards Jesus, called Him to preach in the synagogue, if He had been born of illegitimate cohabitation? To Mary the law of Moses would have been applied, which commanded that such persons be stoned to death; and the Pharisees would have taken the opportunity many times to reproach Christ for the conduct of His Mother. But just the contrary was the case. Mary enjoyed great respect; at Cana She was an honored guest at the wedding, and even when Her Son was condemned, no one allowed himself to ridicule or censure His Mother.

The Nativity of the Mother of God

The Nativity of the Mother of God 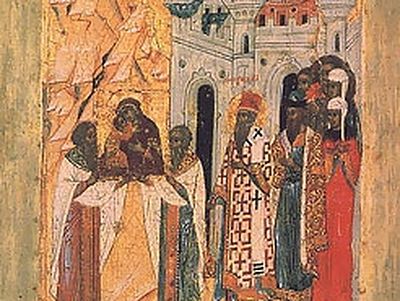 The Intercession of the Most Holy Mother of God
Alexei Artemev

The Intercession of the Most Holy Mother of God
Alexei Artemev
The news reached Moscow that moving from the south to the city was Tamerlane's army—the army of an invincible and cruel conqueror. He was literally invincible—throughout his long life, he never suffered a single defeat. 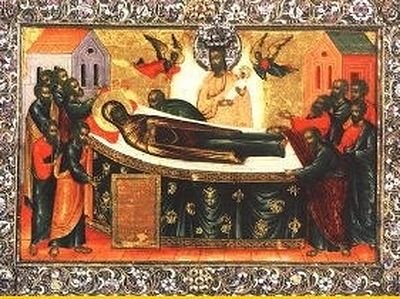 Translation of the Dormition Icon of the Mother of God from Constantinople to the Kiev Caves
“The Queen replied, ‘Anthony will merely give the blessing, then depart from this world to eternal repose. The other one, Theodosius, will follow him after two years. Therefore, take enough gold. Moreover, no one can do what I shall do to honor you. I shall give you what eye has not seen, what ear has not heard, and what has not entered into the heart of man (1 Cor.2:9). I, Myself, shall come to look upon the church and I shall dwell within it.’”