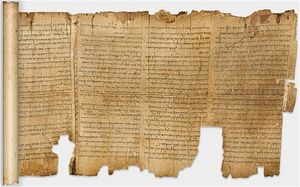 The oldest known biblical manuscripts will be available online in a high-resolution format thanks to a partnership between Google and the Israel Museum in Jerusalem. The Dead Sea Scrolls Digital Project, to be launched today, features searchable, fast-loading images of five complete Israeli scrolls of the Second Temple Period, the time of the birth of Christianity and Rabbinic Judaism. The pictures come with explanatory videos and background information on the texts and their history.

"They are of paramount importance among the touchstones of monotheistic world culture, and they represent unique highlights of our Museum's encyclopaedic holdings,” said James S Snyder, Anne and Jerome Fisher Director of the Israel Museum. Photographer Ardon Bar-Hama took digital pictures of the scrolls at 1,200 megapixels per image. UV-protected flash tubes with an exposure of 1/4000th of a second were used to minimise damage to the fragile manuscripts. The images are almost two hundred times higher in resolution than those produced by a standard camera. This means the user can zoom into the text to the point where it is possible to observe the pattern of the material they are written on. An English translation is also provided and text from the scrolls shows up in Google search queries.

“The Dead Sea Scrolls Project with the Israel Museum enriches and preserves an important part of world heritage by making it accessible to all on the internet,” said Professor Yossi Matias, Managing Director of Google’s R&D Center in Israel. Google has been involved in similar projects in the past, including the Google Art Project, Yad Vashem Holocaust Collection and the Prado Museum in Madrid. The scrolls are accessible online at http://dss.collections.imj.org.il/ .