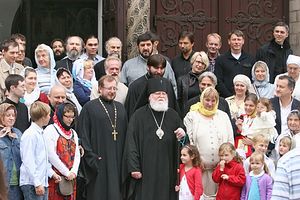 The celebration of the Smolensk "Hodegetria" Mother of God Icon took place on August 10th in the Church of Saint John of Kronstadt in Hamburg where His Eminence Bishop Theophan celebrated the Divine Liturgy.

During the Divine Liturgy deacon Joakim Lindberg was ordained to the priesthood by Bishop Theophan to serve in the Sts. Cyril and Methodius community in Hamburg.

Newly ordained father Joakim Lindberg is a son of the late priest Constantine Lindbergh who founded the German-speaking parish in Hamburg.

Concelebrating with Archbishop Theophan was his longtime friend and seminary classmate Archpriest Valentin Golikovsky as well as the clergy of the Serbian, Romanian and Bulgarian Churches.

After the Divine Liturgy infant Nikon Baburin was baptized by Archpriest Vladimir Simonov, anointed the infant Archbishop Theophan. After the service all faithful were offered tea at the Tchaikovsky Square in front of the church.