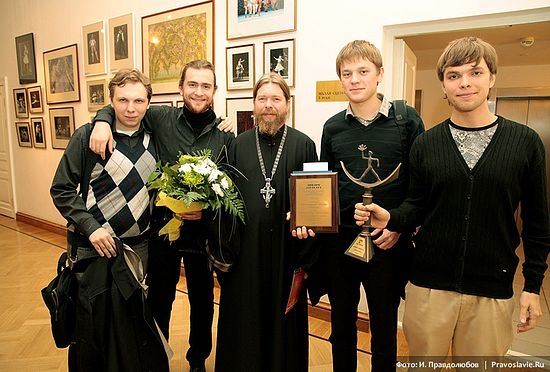 Archimandrite Tikhon with students of the Sretensky Theological Seminary, at the "Bood of the Year" award ceremony.
On September 5, 2012 the annual “Book of the Year Award” was given to Archimandrite Tikhon (Shevkunov), abbot of the Moscow Sretensky Monastery and author of the number one Russian bestseller, “Nesvyatie syatie i drugie paskazy”. This book, which has outstripped all the competition in sales and overall popularity, has been translated into English under the title, Everyday Saints and Other Stories. The Russian “Book of the Year Award” is one of the most prestigious literary awards in Russia. Fr. Tikhon’s book won the category, “Prose of the Year”.

Over a thousand books and serials were entered in the competition. The final results came after a month of at times heated discussion by the jury. Other nominees included “Nemtsy” (Germans) by A. Terekhov, and “Plyasat do smerty” (“Dance until you die”) by V. Popov.

Chairman of the committee O. B. Dobrodeev handed Fr. Tikhon the award, saying, “I am proud and very pleased to have the opportunity to congratulate Fr. Tikhon with this deserved award. I could not imagine that this book would gather such a large number of readers in less than a year—1,100,000!”

“For me it is a great, and I have to admit, unexpected joy that a book, the main theme of which is man’s hidden path to God, should win such heightened attention and interest from the jury and its readers,” Fr. Tikhon added.

The book, Everyday Saints and Other Stories, released just less than a year ago, has become, as the Russian press confirms, the bestselling book since Soviet times. In this short period of time, it has been reprinted six different times. “Everyday Saints” has already been translated into English, Greek, and Serbian, and translations into other European languages are currently being prepared.