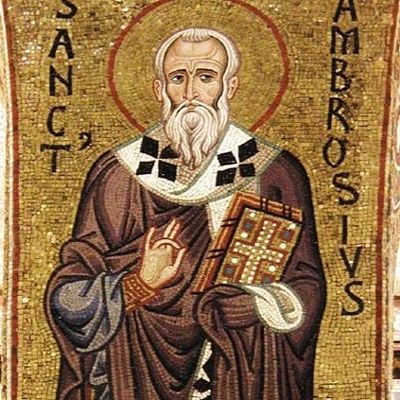 Born in 340, the son of the Roman prefect of Gaul, St. Ambrose returned to Italy with his mother and his sister, St. Marcellina, after the death of their father. There he studied and became such a gifted orator and lawyer that the governor of northern Italy, charging him to "govern more like a bishop than a judge," selected him to be his successor in the capital of Milan.

After the death of the Arian bishop, of Milan, Orthodox Christians and usurping Arians crowded into the cathedral to elect a new bishop. Ambrose, who was not yet a baptized Christian, attempted to mediate and keep peace. While he thus meekly addressed them, a voice cried out, "Ambrose for bishop!" and in this way he was chosen by acclamation, baptized, and a week later, on December 7, 374, consecrated bishop.

Giving himself up to a life of prayer, study, and ascetic striving, St. Ambrose served Divine Liturgy daily and preached frequently, converting many, including Blessed Augustine, to Christ. As a true standard-bearer of Orthodoxy, the saint also gave his name to the liturgical cycle and chant of the church of Milan, called to this day "Ambrosian."

The saint's holy death on Great Friday of 397 produced such an out-pouring of faith that five bishops were not enough to baptize the number of converts that appeared the next day desiring the waters of life.

Renowned in his day as a bold and eloquent orator, St. Ambrose is now best remembered for his writings.

Like his contemporary St. Basil, he wrote a long commentary on the six days of creation (Hexameron) which also contains many instructive analogies between God's harmonious ordering of the universe and the Christian's duty to similarly, attune his soul. The following is an example from his homily on the third day of creation.

"Would that we could imitate the green herb concerning which the Lord speaks: 'Let the earth bring forth the green herb and such as may seed and the fruit tree yielding fruit after its kind of a like nature.' Let us sow, therefore, the seed after its kind. What that kind is, hear the Apostle who says that we ought to seek after that divine seed, if we would succeed in any way in finding the divine; 'Though he is not far from any one of us. For in him we live and move and have our being as some of you,' he adds, 'have said: "For we are also his offering.','

Following this principle, let us sow the seed, not in the flesh, but in the spirit. For we ought not to sow carnal seeds, but spiritual ones, if we desire to attain eternal life.' 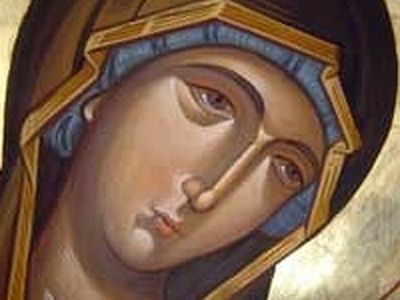 The Life of Mary is Set Before Virgins as an Example St. Ambrose of Milan

The Life of Mary is Set Before Virgins as an Example St. Ambrose of Milan Why should I detail her spareness of food, her abundance of services—the one abounding beyond nature, the other almost insufficient for nature? And there were no seasons of slackness, but days of fasting, one upon the other. And if ever the desire for refreshment came, her food was generally what came to hand, taken to keep off death, not to minister to comfort. Necessity before inclination caused her to sleep, and yet when her body was sleeping her soul was awake, and often in sleep either went again through what had been read, or went on with what had been interrupted by sleep, or carried out what had been designed, or foresaw what was to be carried out. 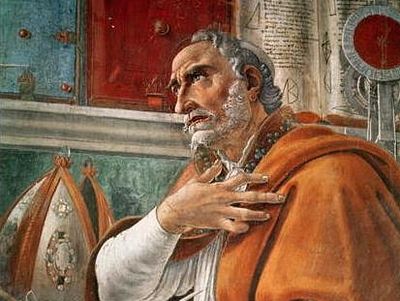 Political reporters learn about St. Augustine. Chaos ensues I imagine that when some reporters read the Republican candidate’s words, they just assume the worst or even just assume that he was saying, contra what Jesus taught while performing miracles, that birth defects were caused by the personal sins of the involved parties. 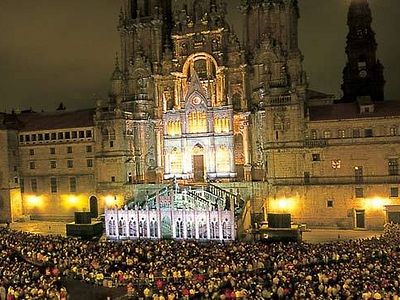 The Founders of the Orthodox West: On Recovering the Spiritual Identity of Western Europe Archpriest Andrew Phillips

The Founders of the Orthodox West: On Recovering the Spiritual Identity of Western Europe Archpriest Andrew Phillips Who are the great historical figures of Western Europe who define its identity? The answers of the secular world to this question are quite different from those of the Church. The Western secular world exalts secular figures like Charlemagne, Charles V, or Napoleon as “great Europeans”. But all three of these left Europe full of graves. Indeed, Charlemagne and Charles V were renowned for their massacres and, as for Napoleon, he declared that he would have had Christ hanged as a fanatic.
Комментарии