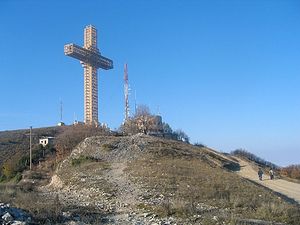 A new, 50-meter- (164-foot-) tall Christian cross that dominates the skyline of the Macedonian capital, Skopje, has rankled some, but its defenders say it is not intended to provoke religious strife, Balkan Insight reports.

“The towering cross” was erected in the city’s Aerodrom municipality and was “sanctified” this week by the leader of the Macedonian Orthodox Church, according to the website.

Most Macedonians are Christians, but about one-fourth of the population is ethnic Albanian, most of whom are Muslim.

Another cross, 66-meters tall, has stood on a mountain overlooking Skopje for more than a decade.

Todor Petrov, director of the World Macedonian Congress, the organization behind the new cross, said it “is not erected to provoke and it is not an anti-Albanian or anti-Muslim symbol.”

“On the contrary, the cross is an inseparable part of Macedonian culture and belongs to the Albanians as much as it belongs to the Macedonians, because both peoples have Christians and Muslims among them,” Petrov said, according to Balkan Insight.

Still, the new cross has riled some Albanian Muslims and even some ethnic Macedonians in Skopje, Balkan Insight reported in November.

Locals complained that the city already has one huge cross on its outskirts and that there were more pressing priorities for the Aerodrom area, including the construction of kindergartens, schools, and a hospital.

The decision to approve the latest cross earlier this year came “amid speculation on social networks” that a Turkish investment group was planning to build four skyscrapers in the Aerodrom area, which could have led to “an influx of Muslim buyers in the ethnically and religiously homogenous” municipality, according to Balkan Insight.

Ethnic Albanian rebels and government security forces fought in a short separatist conflict in 2001 that ended in a peace agreement granting some autonomy and other rights to the country’s Albanians. 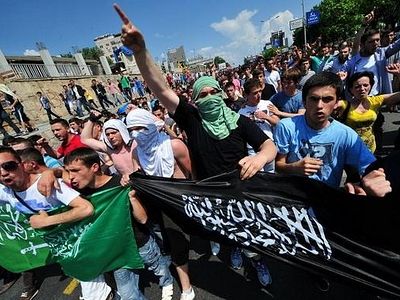 Skopje: Moslem Demo “Death to the Christians” The real demand of the demonstrators involves the release of 20 Moslems, mostly from the Albanian national group that were arrested May 2nd this year by the Macedonian police after a three-week search in connection with the murder of five ethnic Macedonians. According to statements by the Macedonian interior ministry, the evidence for a direct participation by three of the detainees, all former Afganistan warriors, is earth moving. Several automatic weapons as well as Jihad propaganda material was secured from among the suspects. 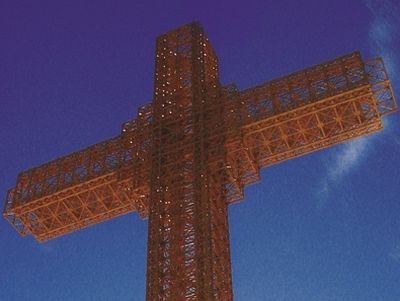 Macedonia: Giant New Cross Angers Skopje’s Muslims A decision to allow the construction of a 33-metre-tall Christian cross in the Macedonian capital has attracted negative reactions from the Albanian Muslim minority. 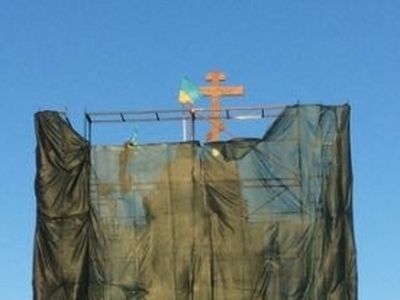 Activists set up a cross in place of dismantled monument to Lenin "We think that the cross is a symbol of freedom, symbol of unity. We want to stop discords in Ukraine with the power of the life-giving cross," activist Nelya Yarovenko said.
Комментарии