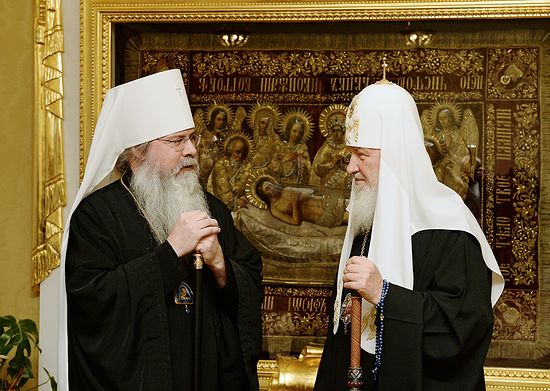 Patriarch Kirill of Moscow and All Russia has called on the Russian Church and the Orthodox Church in America to unite their peacekeeping potential.

"We are meeting with you at a time when the Russian-American relations are not experiencing the best of times. Cold War-era phraseology and lexicon have broken into our life. While the Church does not do politics, it has always been expected to act as a peacekeeper," the patriarch said at a meeting with the leader of the Orthodox Church in America, Metropolitan Tikhon, in Moscow.

For Moscow Patriarchate, this is "the main task in the face of the civilian conflict in Ukraine, as well as in the context of the Russian-U.S. relationship," said the leader of the Russian Church.

He said that recently he met with the new U.S. ambassador in Moscow and told him that even during the difficult Cold War period, not only the Orthodox believers but all Christians in both countries "had the courage and ability to do something to change the situation for the better." What united the U.S. and Soviet Christians at the time was their understanding of belonging to the same values, "but a lot has now changed for the worse," the patriarch said.

"Today we cannot talk about very many Christians in the United States, that we belong to the same values that they do. We feel how this spiritual, moral sense of community which united us during the difficult Cold War years is being destroyed today," Patriarch Kirill said.

For nearly 200 years the Russian Church had links with the U.S. Episcopal Church but this cooperation stopped after the latter ordained an openly gay bishop in 2003, he said.

"Now restoration of the relationship that we had is out of question, but we are fully open to cooperation with the churches on the North American continent, which have remained truthful to Biblical morals," the Russian Church leader said.

Having called Orthodox Christianity in the U.S. "the darling and favorite fruit" of the Russian Church's missionary activities, he said that in 1970 Moscow Patriarchate granted autocephalous status to the Orthodox Church in America, with two metochions, in Moscow and New York, now being an important factor in consolidating the relationship between the two Churches.

For his part, Metropolitan Tikhon recalled that this year marks the 200th anniversary of Orthodox Christianity in America, which was brought to Alaska by Russian missionaries.

I am certain that our today's meeting will further foster our mission among our children, he said.

On Thursday Patriarch Kirill and Metropolitan Tikhon will jointly perform a liturgy at the Church of the Great Ascension inside the Moscow Kremlin.

Hold Fast to What You Have Russia through the Eyes of an Orthodox American Olga Kirianova, Peter Lukianov I had goose bumps, and unexpectedly began to cry like a baby. I am standing in church, tears flowing, and I cannot comprehend where I am. It is impossible to relate this in words. Three minutes ago, I was walking along dirty and busy streets of a bustling modern city, and suddenly I am in paradise!
Комментарии